From the December 1992 issue of Chronicles. 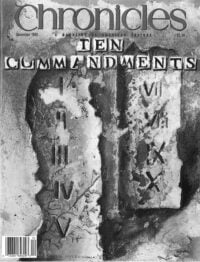 I had heard about, but not read, “The End of History?” Francis Fukuyama’s star-burst essay published in 1989; but I felt a twinge of sympathy for him as his critics chortled and pointed at history rumbling anew: people dancing atop the Berlin Wall, the Soviet Union falling to pieces, an American Army flying into Arabia. The end of history? I thought that perhaps that was not really what Fukuyama meant, that what he was espying was a new structure for history after the idea of democracy—of popular sovereignty—had been instituted everywhere in the world. But after reading Fukuyama’s ideas in full elaboration, I regret to say that I was wrong; and I am appalled to find that Fukuyama is a fool. I do not use the epithet lightly. Fukuyama is “a former deputy director of the U. S. State Department’s Policy Planning Staff.” To paraphrase Henry Adams, the evolution of American foreign policy planning from George Kennan to Francis Fukuyama is sufficient evidence to disprove all the theories of Darwin.

Fukuyama thinks that liberal democracy has conquered the world. Totalitarianism is gone forever. Nationalism is something that he does not, or cannot, consider. The globe is becoming one vast international network. Freedom and the market economy (whatever that is) have become, or are about to become, nearly universal. He is concerned with a world bereft of useful and useless strife. Yet that, according to Fukuyama, may become a moral problem. History will not only become unintelligible, but will cease to exist. This may or may not be regrettable, but “The Worldwide Liberal Revolution”—the title of his central chapter—has seen that it will happen.

The world as seen by Fukuyama consists almost entirely of “Liberal Nations,” with Bosnia or Georgia or Cambodia or Zambia awash with people incarnating the ideas of John Locke, William Gladstone, Benjamin Constant, and Felix Frankfurter. But of course the very opposite is true. Intellectuals not only excel at not seeing forests for trees; they often cannot see a hog from a log. Liberalism is dying throughout the world, including in the United States, where its decay and the rise of the “conservative” movement began at the precise moment—1955—when another intellectual, the Harvard professor Louis Hartz, published his prize-winning book The Liberal Tradition in America, pronouncing the liberal tradition as the only political reality in America. Hartz, though an academic plodder, was by comparison with Fukuyama a sage.

Fukuyama’s mind is philosophical, whence his troubles arise. Like his mentor Leo Strauss he knows (or thinks he knows) plenty of philosophy, while his ignorance of history is lamentable and abysmal. Among other things, Fukuyama is enamored of a Greek term favored by the Straussians: thymos, meaning (to him) the essence of the human condition. (Another of his key chapters bears this title: “The Rise and Fall of Thymos.”) This word he stuffs promiscuously into his fruitcake, while coining other words such as “hypothymia” and “megalothymia,” etc. According to my Greek dictionary thymos means thyme, a pleasant spice. Unfortunately Fukuyama’s thymos has nothing to do with spices.

Owing to lack of space, but also because history (and human nature) do not follow the laws of physics—meaning that while it is easier to wrestle with a weak body than with a strong one, it is more difficult to wrestle with a weak mind than with a strong one—in this review I must let Fukuyama speak for himself. Fukuyama has given his chapters such titles as “The Weakness of Strong States II, or, Eating Pineapples on the Moon,” and “The Victory of the VCR.” In his introduction, he writes: “In lieu of conventional thanks to a typist for helping to prepare the manuscript, I should perhaps acknowledge the work of the designers of the Intel 80386 microprocessor.” He should. And it shows.

Early in his book Fukuyama says that what he meant by the end of history was not history, but History (his capitalization): “history understood as a single, coherent, evolutionary process, when taking into account the experience of all peoples in all times.” Whew. Fukuyama says that he gets this concept of History from Hegel, but he later adds that his philosophy is really a compound of Hegel and of the latter’s modern exegete, Kojeve. Thereafter he refers sometimes to “Hegel-Kojeve,” which to me evokes something like “Haagen-Dazs.” “Our deepest thinkers,” he writes, “have concluded that there is no such thing as history—that is, a meaningful order to the broad sweep of human events.” “Deepest thinkers” is good. “Virtually everyone professionally engaged in the study of politics and foreign policy believed in the permanence of Communism; its worldwide collapse in the late 1980s was therefore almost totally unanticipated.” Not by this reviewer, but that is not the point. The point is Fukuyama’s uncontrollable affection for such words as virtually and totally: “For many Americans the family, now no longer extended or nuclear, is virtually the only form of associational life or community they know.” Tell that to the Marines. (Or to the Mafia.) “People in the Soviet Union and PRC turned out not to be the atomized, dependent, authority-craving children that earlier Western theories projected them to be. They proved instead to be adults who could tell truth from falsehood, right from wrong, and who sought, like other adults in the old age of mankind [what was that?] recognition of their own adulthood and autonomy.” (I saw one of these young Chinese adults in Tiananmen Square, beaming at an American television reporter, speaking into the camera: “I like American girls, American girls can see me now!”)

To continue: “It is possible for a country to be liberal without being particularly democratic, as was eighteenth-century Britain.” (The political term “liberal” did not then exist, but no matter.) “Not everyone can be a concert pianist or a center for the Lakers, nor do they have, as Madison noted, equal facilities for acquiring property.” “Ken Kesey’s 1962 novel, One Flew Over the Cuckoo’s Nest, provides an illustration of the totalitarian aspiration.” “People today resemble Woody Allen’s character Mickey Sachs.” Then Dr. Fukuyama climbs Mount Fujiyama, looks around, and ponders: “What is man?”

Clap and Trap. The other grand contemporary work dealing with the condition of mankind and with its principalities and powers is Graham Fuller’s The Democracy Trap. (The proof copy says that the introduction is by Francis Fukuyama, but I was relieved not to find that in my copy.) Fuller is more realistic and pessimistic than Fukuyama, but for the wrong reason. Someone once said (it is not a very clever saying) that a pessimist is an optimist with experience. Yet quality of experience (including bureaucratic experience) depends entirely on quality of thought. Fuller has plenty of thoughts, but of what quality? He writes of the “Cold War Century,” whose “struggle began in 1917 with the challenge to the capitalist world posed by the Bolshevik revolution.” I would have thought that the world struggle started in 1914, with a horrible world war of which the revolution in Russia was but a consequence; but who am I to argue with a master policy thinker such as Fuller? “The invention of the teenager, in fact, is probably one of the most far-reaching acts of American social creativity,” he adds.

A fact is a fact, no doubt. Compared to Fukuyama’s jappy calligraphy Fuller writes like a red-faced ham-handed American, vulgar to the core: “Whatever value the Cold War had in helping to keep the West’s ideological socks up in Europe and at home . . . ” Oh, for the Order of the Garter! In the end, Fuller on Fuller: “As a senior-level Intelligence Officer responsible for long-range National Estimates at the Central Intelligence Agency (essentially crystal-balling the future of strategic issues for policymakers at the White House and the State and Defense Departments), I had been regularly required to think about global issues and trends as the heart of my daily work for the Director of Central Intelligence.”

This is laughing matter no longer. For anyone honestly concerned with the destiny of the republic, it is a matter for rage, bitterness, and tears. 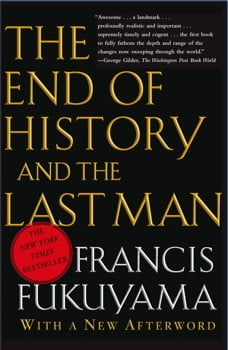 John Lukacs, a famed historian and author of 30 books, all of which were widely reviewed and widely praised, was a longtime, frequent contributor to Chronicles.