A Eulogy for John J. McLaughlin 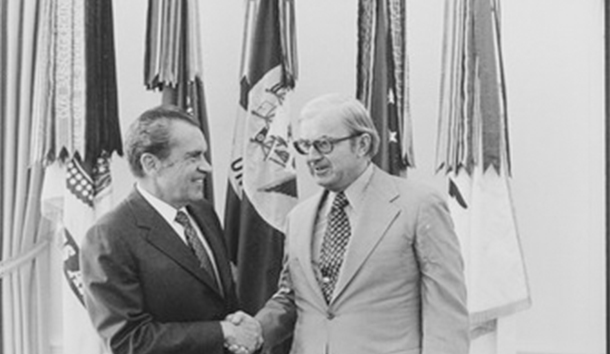 To understand John McLaughlin, it was helpful to have been a 13-year-old entering an all-boys Jesuit school in the 1950s.

For when John yelled “Wronnng” at me from his center chair of The McLaughlin Group, it hit with the same familiar finality I had heard, many times, from Jesuits at the front of the class at Gonzaga.

In that era, John was himself a Jesuit teacher at Fairfield Prep, where the black cape he wore and his authoritarian aspect had earned him from his students the nickname—Father God.

In 1970, Fr. John heard another calling, and, declaring himself a liberal Republican, challenged Sen. John Pastore in his home state of Rhode Island. An unamused Sen. Pastore obliterated John by two-to-one.

It was right after this election, while I was vacationing in the Bahamas, that, one morning, I encountered Father John in his Bermuda shorts at a hotel newsstand on Paradise Island.

John was soon, at poolside, explaining to me why I, as a Catholic and a beneficiary of eight years of Jesuit education, had a moral obligation, a moral duty, to get him a job as a speechwriter in the Nixon White House.

Over some resistance, we succeeded, and John was soon the oracle of the shop, known to younger speechwriters as, “The Rev.”

When Watergate broke, Nixon’s aide Dick Moore urged John to get out and use his speaking talents to defend the president. John was soon out on the front lawn of the White House preaching to large assemblies of writing press and TV cameras.

But John was a portrait in loyalty to the embattled president.

When transcripts of the Oval Office tapes were released, containing the phrase, “expletive deleted,” hundreds of times, and Dr. Billy Graham was publicly scandalized, John was unfazed.

He stepped out on the White House lawn and immortalized himself by calling Richard Nixon, and I quote, “the greatest moral leader in the last third of this century.” Now that is loyalty.

When President Ford came in, John, despite his resistance, was the first man out of the White House. To raise his profile, he asked me to contact William F. Buckley Jr., and get him on as a guest on Firing Line.

I wrote Buckley, and got back a letter that read in its entirety, “Dear Patrick: Intending no disrespect, who is the Rev. John J. McLaughlin, S. J.? Cordially, Bill.”

As it would have crushed John, I did not show him the letter, until he became famous. As he soon did.

John achieved a niche in the pantheon of television journalism when, in 1982, he launched The McLaughlin Group. As one of the initial panelists, I was joined by Bob Novak of the perpetual scowl, known to colleagues as “The Prince of Darkness,” Jack Germond and Mort Kondracke.

Soon Eleanor Clift was aboard, and far from being discriminated against as a woman, she was treated every bit as badly as the rest of us.

The McLaughlin Group was a media controversy and a sensation from the first of its 34 years. President Reagan was a regular viewer.

It was balanced between left and right. Panelists were told to bring opinions as well as facts. John welcomed disagreement. And rather than confine the issues to the political, he introduced ideological, cultural, social and even moral issues.

John selected the topics and the tape to be used, edited his own copy, and ran the show like a ringmaster at a circus—to which the Group was sometimes compared.

And he introduced new features. Predictions at the end of each show. Annual awards shows. I loved it. It was great, great fun.

And John was loyal. When I took a leave of absence to go into the Reagan White House, then requested three more leaves to pursue private endeavors in the 1990s, which did not pan out, John, after leaving me in the penalty box for a while, always brought me back to the beadle’s chair.

At the end, we could see how badly John was failing. But, unlike Maritza, who took wonderful care of him, we did not know how much he was suffering, or the nature of the illness that was taking his life. That he soldiered on in the job he loved for so long is a testament to the courage and character of the man. He persevered.

John and I loved to banter about our favorites poets like T. S. Eliot and recite to each other Latin passages we had learned in school and the Old Church. And in writing this eulogy the words of the poet Catullus, to his brother, came to mind:

And forever, brother, hail and farewell.

This eulogy was delivered Saturday, Aug. 20, in the Basilica at the Shrine of the Immaculate Conception in Washington, D.C.