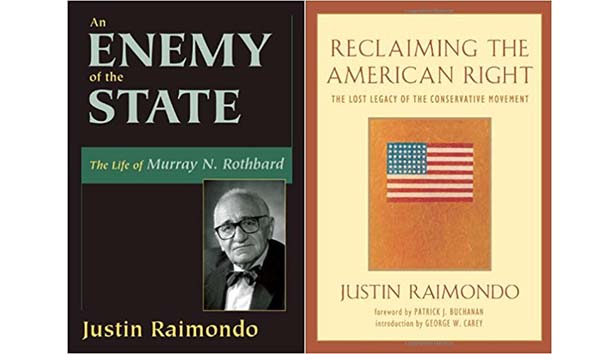 Every month, Chronicles features the foreign-policy analysis and domestic political insights of Justin Raimondo, editorial director of Antiwar.com. Justin has been a contributor to the magazine for over two decades, during which time he has also written two vital works on the history of the anti-statist, anti-interventionist Old Right: Reclaiming the American Right—whose latest edition, from ISI Books, also contains a foreword by Pat Buchanan and criticals by Scott Richert—and An Enemy of the State: The Life of Murray N. Rothbard, a biography of one of libertarianism’s most uncompromising and influential thinkers.

Chronicles recently asked Justin four questions about his background, the state of politics today, and what lies ahead for America’s foreign policy.

Chronicles: What got you started as a political writer? Was it Ayn Rand?

Justin Raimondo:  I can’t say Ayn Rand got me started. I started out as a Frank Meyer-type “fusionist” conservative at the tender age of 12 or 13, having discovered National Review in the library of my junior high school. I joined Young Americans for Freedom, although it was shortly after that that I discovered Rand. My earliest efforts were a one-shot magazine, The New Radical, and some writings for Commentary on Liberty, the libertarian YAF magazine put out by David F. Nolan and Don Ernsberger. Nolan, of course, went on to found the Libertarian Party.

My original intent was to be a fiction writer—and of course there are those who say I succeeded. I fear, however, that writing fiction is beyond my modest talents: it takes real creativity of a sort quite different from writing, say, articles on US foreign policy or politics.

C: You’ve long been associated with libertarians, although you were also a stalwart of Pat Buchanan’s presidential efforts. Where does libertarianism go in the Age of Trump?

JR: Libertarianism today is a confused jumble of leftist “lifestylism,” virtue-signaling, and emotional impulses disguised as a political program. You just have to take a look at the Gary Johnson/Bill Weld farrago to see this. On the one hand, the pro-drugs “live and let live” rhetoric, and on the other a declared adherence to a vague “centrism,” brewed a counterintuitive amalgam of “rebelliousness” and pandering to the Establishment. Thus you had Johnson blathering on about the wonders of pot while Weld was endorsing Hillary Clinton. A more disgraceful campaign—in the name of “libertarianism”—would be hard to imagine.

These people have zero understanding of the Trump phenomenon—and I would go further and say they have no conception of the political. Conflating individualism with narcissism, they utilize ideology as a form of self-actualization rather than, say, a way to save the country.

While I have been “associated” with libertarianism, it’s important to note that this association, for most of my career, has been with the perspective of the late Murray N. Rothbard—and Rothbardianism is as different from “official” libertarianism” as it is from modern liberalism. Murray was an Old Rightist, at heart, despite his sojourn with the New Left in the 1960s and the years he was associated with the Cato Institute, when the strategic goal was to “reach out” to mainstream liberals. After his break with Cato, he clearly saw the rise of right-wing populism as the wave of the future, and his remarkable address to the first meeting of the John Randolph Club clearly foresaw the Trump phenomenon. (See here). I stand by Rothbard’s analysis, which is as fresh and prescient today as the day it was written.

Buchanan was the necessary prelude to Trumpism, and Pat is clearly the father of that revolution—a fact that is almost never acknowledged. One correction: I did not write Buchanan’s Reform Party speech, nor did I ever write any of his speeches.

C: What are the biggest battles ahead for the antiwar movement? The neocons seem to be routed, for now, and humanitarian interventionism lost with Hillary Clinton. But we’re still at war in Afghanistan after an incredible 16 years, and U.S.- or U.S.-backed interventions in Syria and Yemen seem to be escalating. What’s the big picture, from your perch at Antiwar.com?

JR: The Trump victory was a great victory for anti-interventionists, although the ostensibly anti-interventionist “movement”—if such there is—is incapable of recognizing it. That a Republican presidential candidate could get away with not only opposing the Iraq war but also declaring that we were lied into it and still win the nomination marked the end of the neoconservative domination of the GOP. That this candidate went on to win the White House only cemented that victory, while further grinding the Bill Kristols of this world into the dust.

This and Trump’s critique of NATO, his abjuration of regime-change, his opposition to baiting the Russian bear, and—above all—his slogan of “America First,” marks a real turning point. It almost doesn’t matter what he does—that is, whether he follows through with actual policies—because we’ve already won in the Hegelian sense. In the realm of ideas, the victory of non-interventionism is already sealed. I say this in the same sense that Hegel saw Napoleon’s victory at the battle of Jena as marking “the end of history.” No matter what happens now, the ideological triumph of the case for non-interventionism is assured. Trump can invade Yemen, Syria, wherever—and yet the fact that the country voted for a man who pledged to stay out of the affairs of other nations and put “America First” trumps whatever he actually does as president.
America is finished as an imperial power: the Empire is simply not sustainable, either economically or politically. Of course, neoconservatives and their liberal internationalist allies sees this view as “declinist,” but in reality it paves the way for the regeneration of the real America, not the puffed-up bully that has taken its place.
As for the wars in Afghanistan, Iraq, etc., the American ship of state cannot do a U-turn in a matter of months. This is what Trump’s critics—who constantly pester me with exclamations of “Look! He’s bombing Yemen!” and “See, you were wrong: we’re putting more troops in Afghanistan!”—don’t understand or want to understand. They want instant results. Unfortunately, life doesn’t work that way—especially when you are dealing with a globe-spanning colossus. In the short run, we’ll continue to see Uncle Sam rampaging through the Middle East and perhaps elsewhere. In the long run, however, the colossus is hollow.

C: You’re the author of several indispensable books, including Reclaiming the American Right and An Enemy of the State: The Life of Murray N. Rothbard. Do you have any other book projects on the horizon or, if not, what important book would you like to see somebody else write?

JR: I do have a couple of book projects in mind, with one in particular on the back burner for quite a while. The title encapsulates the theme: Fear Itself: Roosevelt’s Wartime Dictatorship, chronicling the repressive measures “that man in the White House” undertook to consolidate his power during wartime. I have to say, however, that writing a column three times a week—not to mention my Chronicles column—precludes the kind of sustained effort that writing a book length manuscript requires. During the time it takes to write it, writing a book is like a marriage: it demands fidelity. My current writing schedule makes that requirement problematic. However, as I approach retirement age—perhaps reducing my output to one column a week—I look forward to a glorious future when I’ll be free to engage in this form of literary matrimony.