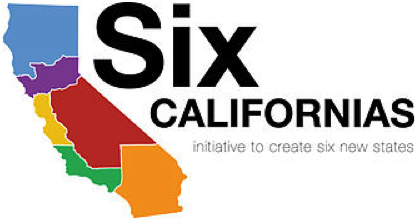 California is a preposterously large state, with 38 million dwellers stretching toward 138 million. So it’s not surprising a new idea to split it into six states has gurgled up from Silicon Valley venture capitalist Tim Draper, who’s holding a press conference today, Feb. 24, at 6 pm EST. His divorce initiative just received the go-ahead to circulate signatures to be on the November ballot.

Proposals to divide the once Golden State rise now and then like a surfer’s blue wave on a sunny day. The state actually passed a law appealing to Congress to break off Southern California in early 1861, when the whole state’s population was 380,000. But the Civil War intervened and the Yankee government in D.C. wasn’t pleased with the Southland’s Southern sympathies:

“Throughout the war, the presence of federal troops and, later, California militia units loyal to the Union, succeeded in stymieing the efforts of those who would rather see Southern California join the Confederacy.”

The obvious division remains between Northern California, whose culture was most influenced by New England transplants, and Southern California, a blend of old Spanish-Mexican families, Southerners (Gen. George S. Patton’s grandfather was a Confederate colonel killed at the Third Battle of Winchester) and Midwesterners seeking the sun (Long Beach is known as “Iowa Beach”).

But the past decade also has dramatized the division between rich, chichi Coastal California, with median housing values of more than $1 million in San Francisco, Silicon Valley and Santa Barbara – and impoverished, high-unemployment Inland California, where all those Okies drove on their Grapes of Wrath flivvers during the Dust Bowl and hundreds of thousands of immigrants, legal and illegal, pick the food in your pantry.

Draper’s plan would create these states:

1. Jefferson in the far North, where folks long have sought to join with their neighbors in Southern Oregon to form a new state of the same name. Politics would be mostly conservative Republican.

2. North California, including Sacramento and the rich wine country nearby. Mostly liberal Democrats, including the hordes of government workers in the current state capitol.

3. Silicon Valley, including its namesake, San Francisco and Monterey. Despite its vast digital wealth and new power over the current state, politically it’s to the Left of Pyongyang.

Draper has good reason to want to split off his beloved Silicon Valley. I drove around there last July. The world’s largest clot of billionaires and centimillionaires is forced to drive $1.4 million Bugatti Veyronson crumbling roads imported from Kazakhstan. Despite several initiatives prohibiting the practice, the state perennially diverts road repair money to public-employee pay, perks and pensions, welfare for illegal immigrants and nutty ideas like high-speed rail and a tunnel under the Delta water system.

Draper’s own Silicon Valley is much to blame because of its own leftism. Indeed, if it became its own state its policies would be self-destructive.

What chance does the plan have? As an initiative, slim; in Congress, none.

The state’s major political forces will oppose it because the the massive population makes almost every California governor and U.S. senator a potential U.S. president or vice president. Nixon and Reagan came from here. Gov. Jerry Brown ran for president three times. Sen. Dianne Feinstein used to be a potential vice presidential candidate before she got old. Even Arnold Schwarzenegger, according to biographer Ian Halperin, was looking to amend the U.S. Constitution to allow foreign-born presidents before his governorship “terminated” in debt, deficits, a record $13 billion tax increase and cronyism.

If the rest of America wants to tamper with California’s status, I suggest expelling it from the Union.