Their America, and Ours. 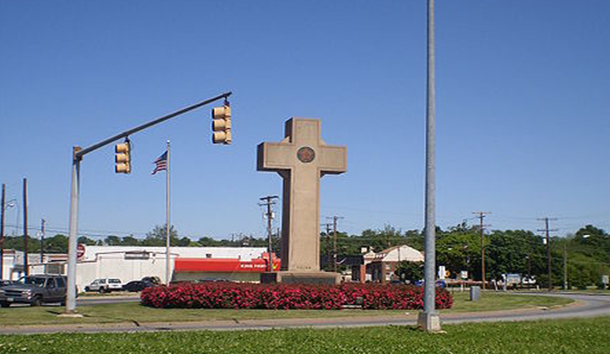 “Meet you at Peace Cross.”

In northwest D.C. in the 1950s, that was an often-heard comment among high schoolers headed for Ocean City.

The Peace Cross, in Bladensburg, Maryland, was a 40-feet concrete memorial to the 49 sons of Prince George’s County lost in the Great War. Paid for by county families and the American Legion, it had stood since 1925.

Before the Beltway was built, Peace Cross, at the junction of U.S. Route 1 and Maryland Route 450, was a landmark to us all.

Last month, two federal judges from the 4th Circuit ruled that Peace Cross “excessively entangles the government and religion” and must come down. A suggested compromise was to saw the arms off, so the monument ceases to be an offensive cross.

One wonders: At what moment did Peace Cross begin to violate the Constitution?

Answer: Never. No alteration has been made to the cross in a century. The change has come in the minds of intolerant judges and alienated elites where the dirty creek of anti-Christian bigotry now flows into the polluted stream of anti-Americanism.

Both are manifest in the rampage to rip down memorials to the men who brought Western Civilization to the New World and made America the great and good country we were blessed to inherit.

Monday, on Laura Ingraham’s Fox News show, White House Chief of Staff Gen. John Kelly called Robert E. Lee “an honorable man,” who chose to defend the people among whom he had been raised.

“It was always loyalty to state first in those days,” said Kelly, when asked his view on Alexandria’s Episcopal Church taking down plaques to its greatest parishioners, Lee and George Washington.

An explosion of outrage greeted Kelly’s defense of Lee.

Asked in 1960 how he could keep a portrait of a man who tried to “destroy our government” in his Oval Office, President Eisenhower wrote his critic back:

“General Robert E. Lee was one of the supremely gifted men produced by our Nation. He believed unswervingly in the Constitutional validity of his cause which until 1865 was still an arguable question in America; he was a poised and inspiring leader, true to the high trust reposed in him by millions of his fellow citizens; he was thoughtful yet demanding of his officers and men, forbearing with captured enemies but ingenious, unrelenting and personally courageous in battle, and never disheartened by a reverse or obstacle. Through all his many trials, he remained selfless almost to a fault and unfailing in his faith in God. Taken altogether, he was noble as a leader and as a man, and unsullied as I read the pages of our history . . .

“To the degree that present-day American youth will strive to emulate his rare qualities, including his devotion to this land as revealed in his painstaking efforts to help heal the Nation’s wounds once the bitter struggle was over, we, in our own time of danger in a divided world, will be strengthened and our love of freedom sustained.

“Such are the reasons that I proudly display the picture of this great American on my office wall.”

Have some terrible new truths been unearthed about Lee we did not know in 1960?

No. The change has taken place in the poisoned minds of modernity.

“We need to understand that at the time of the War Between the States the issue of secession had remained unresolved for more than 70 years. Men of probity, character, public standing and unquestioned loyalty, both North and South, had disagreed over this issue as a matter of principle from the day our Constitution was adopted.”

Ike refers not to a “Civil War,” but to the “War Between the States.” And correctly so. For the South did not seek to bring down the U.S. government, or overturn Lincoln’s election, or seize power in the capital—but to leave the Union, to secede, as Jefferson and John Adams voted to secede from Britain in 1776.

Asked on Fox News about what is happening today with the public insults to our national anthem and the desecration of our monuments, Justice Clarence Thomas raises questions being asked by many Americans:

“What binds us? What do we all have in common anymore? . . . We always talk about E pluribus unum. What’s our unum now? We have the pluribus. What’s the unum?”

The spirit that produced the war in the 1860s, and lasting division in the 1960s, is abroad again. A great secession of the heart is underway.