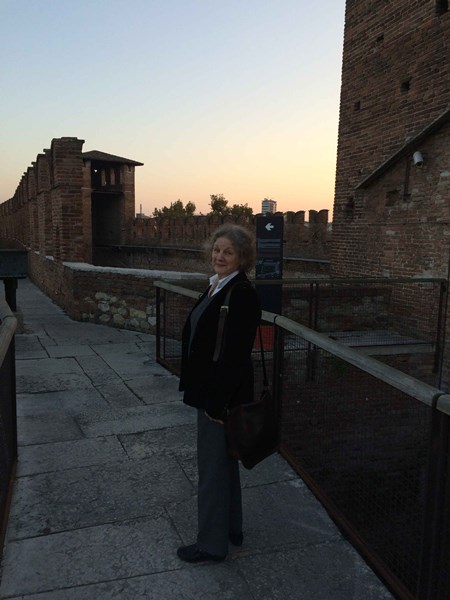 During a long and less than spectacular lunch at a tourist joint on the Piazza Brà in Verona today, I could not help overhearing an American couple talking about their trip, their hopes, their dreams. They were dressed regulation Rick Steves, with dangly things around their neck to connect them to their tour guide—this despite the fact that the male member of the couple bragged of buying business class tickets. But, then, he explained, he could never have thought of all those hotels and transfers that had to be arranged. Even so, the nearly perfect tour had problems. For example, they had spent an entire day in Florence, which meant they could not get to I never found out where because—who knows where, since the waiter talked over them in taking their order.

I thought of Marvin the Robot, in The Hitchhiker’s Guide to the Galaxy. His signature line was “I’m so depressed.” Marvin had an astronomically high IQ but he had to serve the petty needs of retarded organisms.

The age of the couple in question, I put at nearing 50, because they both looked so worn out and so indifferent to their personal appearance. It was if they were made out of soggy cardboard on which drab colors had been painted to suggest hoodie, cargo pants, and sweat shirt. I cannot claim to be either handsome or a slick dresser, but I don’t think it is too much to ask of my fellow bourgeois and bourgeoises that they gussy themselves up high enough so as not to be disgusting. My friend Navrozov wrote eloquently on this topic a few days ago, but, then, Andre has been rich and fashionable, while I am insufferably middle class.

My wife, however, who has a much better sense of these things, declared them to be in their mid 30’s, because they were talking of what they wanted to do before they had a child. This was still more depressing: They were going to reproduce. I am so depressed.

They were depressed, too, because, as the sour-faced and skeletal He explained to the bloated clerical faced She, they had ended up wasting an entire half hour on lunch.

My wife and I had decided to waste an hour and a half at this overpriced tourist trap, because, A, it was in the sun and the temperature was only 64, and B, we had just spent nearly four hours wandering around two beautiful churches, San Fermo and San Zeno, and since I refuse to spend good Institute money on going into the Roman Arena to see what I used to see for free, we got a table just across from the Arena and drank overpriced cheap wine and split a mediocre pizza and a less than acceptable Insalata Caprese. Since we knew what we would get anywhere in the world in sight of a tourist destination, we were pleasantly surprised the pizza was edible—though, please believe me, never eat a pizza in the Po Valley, if you can avoid it. It is not that they do not know how in theory such a thing might be made, but, rather, that they have no idea of what pizza is supposed to taste like. To them, it is a thinner focaccia with bland cheese, “salsiccia dolce” (here sweet means flavorless), and meaty mushrooms. They were more tasty than champignons, but just barely. Still, as a generic food product, it was more edible than most of my lunches back home, and even an hour later the overly sweet prosecco—almost a litre—has not given me a headache. “When in the chronicle of wasted time, I see descriptions of the fairest wights, and beauty making beautiful old rhyme…”

Wasting time, I explained to my dear wife, is one of my ways of postponing some of the ravages of old age. But wasting time is not the same as doing nothing. There was a character in Joseph Heller’s Catch 22, who deliberately avoided excitement and cultivated boredom, because when you are bored, time passes more slowly, and hence, he reasoned, a bored man addicted to tedium might live almost forever. No, what one has to avoid is the deadening routine of work—including household chores and yard work—that turns us into automata who cannot extract a particle of pleasure from the passing scene. I think of the tedious old fool Kant, who was so regular in his habits that people set their clocks by him. Smaller wonder that a dead man produced a “philosophy” that has deadened the moral imagination of everyone who has embraced it. No lover of Nietzsche, I should still prefer to live among his imagined amoral strong men than among Kant’s academic disciples whose only weapons are hypocrisy, envy, and dullness.

The fallacy of Heller’s character’s line of argument is that we do not typically envy the slug, even if it were to live a thousand years. In fact, it is the moments of great joy or fear or anger or sorrow that we feel most alive.

Another way to postpone senility is refusing to worry about anything but travel plans. I hate travel because the entire “industry” is a conspiracy of dunces to humiliate, while inconveniencing the traveler. But in everything else, my motto is borrowed from Alfred E. Newman: “What, me worry?”

For example, take the current furor over ebola. But let’s save that for the next post.