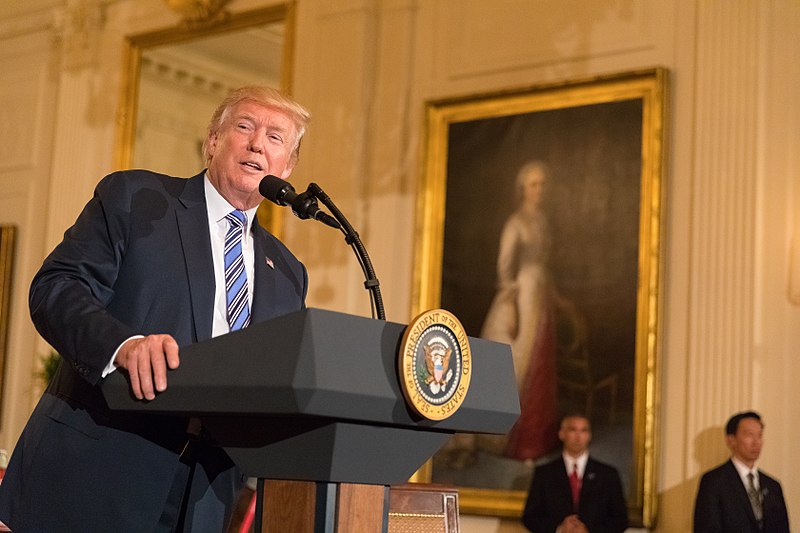 From the November 2015 issue of Chronicles.

Politics is all about hatred.  Never mind who you’re voting for: It’s who you’re voting against that really counts.  And that’s why any disagreement I may have with Donald Trump’s actual policies is completely irrelevant.  Because what really matters is that all the people I really hate—the media, the leadership of both parties, the entire political class—really, really hate The Donald.

The neocons hate him because he has upset their little applecart, which had Jeb Bush riding in front and Marco Rubio hanging off the back.  The left hates Trump for his alleged xenophobia, Islamophobia, and other high crimes, such as being a successful businessman.  And most of all, the Sensible Center hates his guts for precisely those characteristics which have catapulted him to the top of the polls: his unvarnished, unrehearsed resemblance (setting aside his possession of several billion dollars in assets) to ordinary Americans.

I would never actively support Trump’s campaign, but there’s nothing wrong with rooting for him from the sidelines, cheering him on as he deflects the broadsides coming from both the left and right wings of the establishment, while appearing to be having an awful lot of fun in the process.

Politicians need to be judged by their enemies.  And just look at the wonderful array of haters assembled to stop the Trumpian Surge!  Bill Kristol is so worried that he’s threatened to support a third-party neocon dream ticket—Dick Cheney and Sen. Tom Cotton.  (What will they call their party?  Americans for World War III?)  And according to outraged liberals, The Donald is a racist for pointing out that, in order to qualify as a country, we need to have borders.

And it turns out that Trump isn’t as bad on foreign policy as I first thought.  During the second GOP debate, he said this about U.S. policy in Syria:

This sounds positively Paulian, albeit without the weak-kneed, neocon-appeasing spinelessness of Paul the Younger.

Trump stands in stark contrast to the rest of the Republican pack, which can’t wait to reignite the Cold War and routinely compares Vladimir Putin with Joseph Stalin.  In response to a question about what we should do about Putin’s efforts to fight terrorism alongside Syrian strongman Bashar al-Assad, Trump replied, “I would talk to him, I would get along with him. . . . He has absolutely no respect for President Obama.”

Of course this led to much howling from the peanut gallery, including a piece in the Washington Post describing Trump as “another Putin.”  Kristol, who had previously tweeted that he was “anti-anti-Trump,” went ballistic, along with the left-neocons in the Democratic Party who hate Russia and Putin as much as the right-neocons do.

So here we have the entire establishment up in arms over the triumph of Trump.  I’ve lost count how many times they’ve yelled “Gotcha!” at him, only to discover that his latest supposed gaffe has elevated him higher in the polls.

Bereft of a candidate of my own and isolated from the fray by the lack of a Party of Liberty, I am reduced to rooting for someone whose philosophy—if it can be called such—is in many ways the exact opposite of my own.  Trump is no libertarian, but he may be something far more useful at this point in American political history: a demagogue who will bring the whole rotten system down.

In his speech at an early meeting of the John Randolph Club my old friend and mentor Murray Rothbard declared that, “in this era where the intellectual and media elites are all establishment liberal-conservatives,” the only way to awaken a “right-wing populism” is with “a dynamic, charismatic leader who has the ability to short-circuit the media elites, and to reach and rouse the masses directly.”

If anybody has the ability to short-circuit the media elites and reach the American people directly it is Trump.  And as the Obama administration gets ready to admit 100,000 Syrian refugees into the United States—refugees from a regime-change operation initiated by Washington—that may indeed be the spark that sets the political landscape aflame, devouring the GOP, bringing down the establishment, and leaving only charred smoking ruins.

I can do more than live with that: I can celebrate it.

Previous PostIs Trump Entering a Kill Box?Next PostShall We Fight Them All?