Why Are They Gunning for Gorsuch? 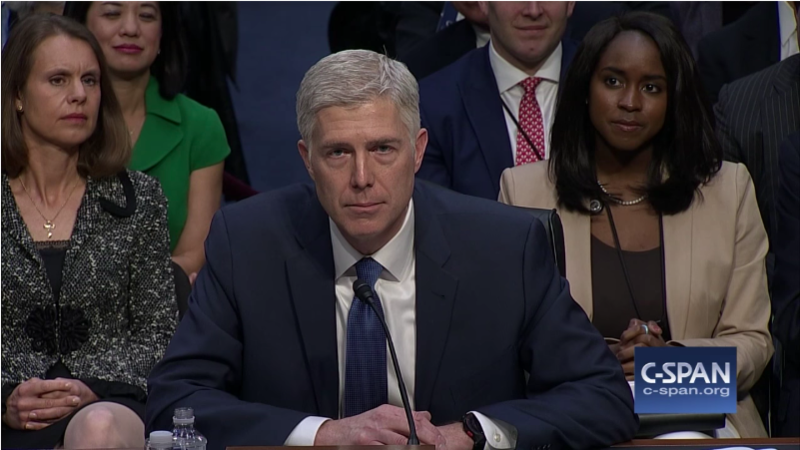 An uncomplimentary picture takes shape in the mind: the Senate’s Democratic minority (save for a higher-minded handful) standing in a row, thumbs affixed to noses, fingers waving provocatively in the air, mouths emitting a rude sound commonly known as “the raspberry.” Think we’re going to confirm Neil Gorsuch to the Supreme Court?! Think we’re going to apply brains and reasoning power to the defense of constitutional liberty?! Think we’re going to behave like adults?! Adults, for crying out loud?!

Everybody with a brain cell in gear understands the frequent ugliness of politics. Politics at bottom is about power—the power to tell others what we’re going to do and what we’re not. That inescapable consideration renders the whole business contentious and, more than occasionally, mean and lowdown.

The Gorsuch “controversy”—which isn’t a controversy based on real differences of legitimate opinion, else the superbly qualified Gorsuch would be confirmed hands-down—illustrates, largely enough for an IMAX screen, the mean and lowdown side of the political power struggle.

Democrats have no more cause to filibuster Gorsuch than they have to strip Malia Obama of U.S. citizenship. They desire, mainly, to give Donald Trump their version of the bird—for offenses having nothing to do with the Gorsuch nomination.

Oh, yes, there’s the pretend “issue” of how the Republicans denied a hearing to President Barack Obama’s nomination of Judge Merrick Garland to the high court. They did deny such a hearing, for reasons that represent how morally lost our politics have become; to wit, Garland’s confirmation (however welcome it might have been at another time) would have cemented the ascendancy of the court’s left-to-liberal bloc. That would have crushed Republican hopes for neutralizing the court’s growing power to continue legislating in an unanswerable way, removed from redress and accountability.

The Republican refusal to consider Garland’s nomination, near the end of Obama’s term, was rough but never mean stuff. It signaled the expected birth of a chance to put on the court someone of conservative kidney; then it drew renewed notice to the once unthinkable burgeoning of the court’s role as Olympian arbiter of everything, telling the peasants what they were to do, like it or not. For which lamentable state of affairs blame attaches chiefly to the judicial “progressives” Senate Democrats want on the high court, rather than the likes of Neil Gorsuch.

To the extent one sees Senate Democrats as having at least a procedural point about the treatment of the Garland nomination, a counter-objection arises: As our mothers (God bless ’em) used to tell us, two wrongs don’t make a right. Unless the doers of the wrongs, past and prospective, start off at some point on level ground, things are going to get worse.

The Gorsuch nomination affords reasonable Democrats—there are still some around—a chance to say, look, we need to do business together, for the nation’s sake. We’ll vote for Gorsuch, a jurist of magnificence; then we’ll see, we’ll hope, we’ll pray that the next time a Supreme Court seat opens up, we can avoid the phony indignation, the acts of ritual outrage such as befoul the process now. Maybe we can find a way to put the good of the nation first. Wouldn’t that be a precedent-breaker: Thinking of the nation over me, myself and I? Respecting the well-being of the country over the aspirations of my party leaders? How about giving the bird to irrational, mean-spirited behavior instead of to democratic procedures and civilized niceties?

We, the people, would come out ahead, that’s for sure. There’s long been a “lowest common denominator” aspect to democratic politics—our politics. A constant, and insulting, temptation on our leaders’ part is that of lowering performance levels to meet the voters’ supposed non-standards. What if those same leaders chose to raise, rather than lower, the voters’ expectations for virtue and wisdom and honor, not to mention love of country?

The outcome is hard to predict. There have been few, if any, such attempts of late. We might give it a try all the same, by according Neil Gorsuch that which he deserves: the unanimous encouragement of the United States Senate to do justice and seek the common good.