From the October 2011 issue of Chronicles.

Many Americans probably think that the Pledge of Allegiance dates to the time of the American Revolution, but it was written more than a century later, in 1892.  They might be shocked to learn that it was written by a Christian socialist, and the sanctifying words “under God” were not added until 1954.  But they would be downright baffled if told that earlier Americans would have regarded a pledge of fealty to the flag as an affront to their patriotism and an invasion of the sphere of private and local liberty their constitutions were meant to secure.

There are some Americans who still feel that way.  Minnesota Gov. Jesse Ventura vetoed a proposed state law that would have required all public schools to have a flag ceremony and pledge recitation every morning.  “Patriotism is voluntary.”  That was in 2002.

The strength of this book lies in its careful recounting of why the Pledge was written, how it has changed, and what it has meant to Americans over the last 120 years.  The story begins with the Youth’s Companion, a popular children’s periodical of national circulation published in Boston, Massachusetts.  In 1888, the magazine launched the “Flag Over the Schoolhouse” program.  It was the idea of James B. Upham, head of the Companion’s premiums department, whom the authors describe as combining “patriotic zeal with a genius for promotion.”  Boys and girls were sent certificates, which they were to sell to neighbors until they had enough money (ten dollars) to purchase a flag for their school.  The Companion sold over 25,000 flags this way in 1891.

The next year came the 400th anniversary of Columbus’s discovery of the New World.  The World Columbian Exposition, also known as the Chicago World’s Fair, was being held in October to commemorate it.  Upham came up with the idea of having “a national Columbus Day” public-school ceremony.  Exposition officials liked the idea and named the Companion the official sponsor.  Its owner, Daniel Sharp Ford, put his new employee, Francis Bellamy, previously a Boston Baptist minister, in charge of the program.  Bellamy at once began lobbying Congress to authorize President Benjamin Harrison to make Columbus Day a national holiday.  He succeeded.  He also wrote the President’s proclamation: “Let the National Flag float over every school house in the country.”  Bellamy called the program “a Boston idea.”

Bellamy’s next order of business was to write a flag salute.  There was already one in use, written by a Union veteran, George T. Balch, for the first national Flag Day (1885).  It read, “I give my heart and my hand to my country—one country, one language, one flag.”  Bellamy wanted to improve on that, and he did.  “I pledge allegiance to my flag and the Republic for which it stands, one nation, indivisible, with liberty and justice for all.”  Bellamy added the particle to in front of “the Republic” before the year was out.

Bellamy called his pledge “a straight-out vow of allegiance.”  He intended it as a unifying ritual for an increasingly diverse nation.  He clearly had immigration on his mind when he wrote it, as well as the Late Unpleasantness and the Social Question (i.e., the violent conflict between labor and capital).  The Pledge seemed to fulfill a felt need.  By 1900, 19 states and territories had made the morning flag salute mandatory in their public schools.  There were at least four other flag salutes in use, but Bellamy’s in time eclipsed them all.  The Grand Army of the Republic, the powerful lobbying arm of Union veterans, endorsed Bellamy’s version in 1904.  The American Legion’s National Americanism Commission adopted it in 1924, which made it official.  That commission also made the first significant change to the wording.  Members feared that immigrant children might be thinking of the flags of their fatherlands when saying “to my flag,” so they substituted the phrase “to the flag of the United States of America.”  Bellamy hated the change, believing it ruined the poetic flow of the wording.

Bellamy was an immigration restrictionist and racialist.  In the mid 1890’s, he went on a national lecture tour to discuss “Americanism in the Public Schools.”  It was, he said, the vital mission of the public schools “to assimilate these children [of the foreign born] to an American standard of life and ideas.”  In an 1897 editorial, however, he warned that the Pledge was not a magic formula of assimilation, that there were natural limits to the numbers and nationalities of those who could be admitted:

A democracy like ours cannot afford to throw itself open to the world where every man is a lawmaker, every dull-witted or fanatical immigrant admitted to our citizenship is a bane to the commonwealth; where all classes of society merge insensibly into one another.  Every alien immigrant or inferior race may bring corruption to the stock.  There are races more or less akin to our own whom we may admit freely and get nothing but the infusion of their wholesome blood.  But there are other races which we cannot assimilate without a lowering of our racial standard, which should be as sacred to us as the sanctity of our homes.

Bellamy explained that the words “one nation, indivisible” were taken from Daniel Webster and Abraham Lincoln, and were meant to convey their idea of an indissoluble Union.  There were two Civil War precursors to the mandatory flag salutes, both of which go unmentioned by the authors.  In the days after the Confederate bombardment of Fort Sumter, pro-Union mobs went about demanding that Northern Democrats, who were perceived as pro-Southern and antiwar, show the flag.  The federal government also required border-state whites and Northerners accused of antiwar activity to pledge their loyalty to the Union.

The phrase “under God” was a Cold War modification inspired by Lincoln’s Gettysburg Address.  American leaders wanted to distinguish their God-sanctioned democratic way of life from Russia’s atheistic communism.  The change originated at a Lincoln Birthday celebration in Chicago in 1948, when Louis A. Bowman of the Illinois chapter of the Sons of the American Revolution inserted the words “under God,” which he had taken from Lincoln’s famous oration.  The Knights of Columbus began lobbying Congress to add the sacred and hallowed words.  President Eisenhower signed it into law on National Flag Day, June 14, 1954.  Two years before, Congress created the first National Day of Prayer and, four years later, made “In God We Trust” the national motto.  It was a pious decade.

Perhaps the nadir for the Pledge in American life came during the 1988 presidential election.  In a nationally televised debate, Vice President George H.W. Bush attacked his Democratic opponent, Michael Dukakis, because the latter had vetoed, when governor of Massachusetts, a 1977 bill requiring public-school teachers to have their classes recite the Pledge every morning.  Dukakis argued that the bill was unconstitutional.  He cited West Virginia State Board of Education v. Barnette (1943), in which the Supreme Court had ruled that students could not be forced to say the Pledge, as such compulsory speech violated their First Amendment rights.  Dukakis argued that the same constitutional principle protected teachers.  One would think that presidential candidates would have more important things to debate.

The most recent constitutional challenge came in 2002, when the Ninth Circuit Court of Appeals in San Francisco ruled that reciting the Pledge in public schools was unconstitutional because the words “under God” violated the Establishment Clause of the First Amendment.  The decision provoked outrage among a public still smarting from the terrorist attacks of September 11 the year before.  The Supreme Court reversed the ruling on the narrow, technical grounds that the man who had brought the suit had no standing to do so, as he was not the legal guardian of the child in the case.  (He was merely the biological father.)

The Pledge remains popular.  A 2007 Gallup Poll recorded that 77 percent of the American public approved of its recitation in the public schools.  The authors of this book belong to that percentage.  They praise the Pledge as “a shared ritual,” a “wonderful summation of American values,” “a binding oath meant to guarantee the fidelity of citizens to the republic,” and “a national Rorschach test constantly revealing what it means to be an American.”  But can a pledge really be all those things?  What’s more, if it is “a living document subject to reinterpretation” (as the authors contend), how can it instill a coherent national identity?  And if the “heart of the American experiment is change and reinvention” (as they also believe), then why not discard the Pledge and substitute a multicultural oath of allegiance?

Francis Bellamy did not think that his words could conjure a unified nation out of a country without any limits on who may reside in it.  Livy observed more than two millennia ago that “the only true patriotism comes slowly and springs from the heart: it is founded upon respect for the family and love of the soil.”  All of history attests that it can be preserved in no other way. 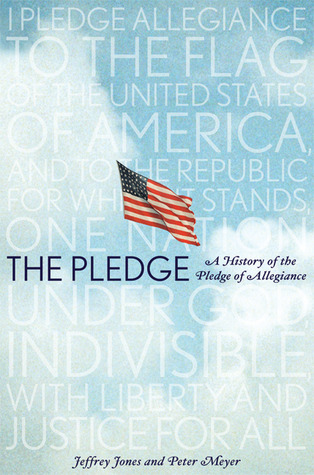