A Theory of Fairness 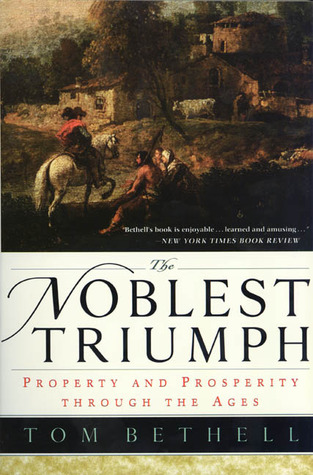 From the December 1998 issue of Chronicles.

“Mine is better than ours.”
—Benjamin Franklin

Tom Bethell, here as often before, uses sturdy common sense to challenge experts in their own field. In a controversial article many years ago, he dared to suggest that evolutionary biologists have exaggerated the evidence for Darwinism. Though roundly criticized by supporters of orthodoxy, Mr. Bethell manifested an uncanny ability to ask disconcerting questions.

That ability is continually on display in The Noblest Triumph. Here, he indicts economists because they have failed to set forth in detail an answer to what should be a basic question of their discipline: Under what institutions will a society prosper? Since the days of Adam Smith, economists have neglected to analyze property rights, which are, in Mr. Bethell’s view, the key to economic success. Classical economists such as David Ricardo continued Smith’s policy of taking property rights for granted, and with John Stuart Mill, the last of the classics, things got worse. Mill often criticized private property and seemed to look forward to the onset of socialism, although Mill’s ambiguous prose mirrored his dithering on the issue. Of course, Karl Marx said a great deal about property; but his fervent denunciations contributed little to understanding. The Austrian school, including Ludwig von Mises and Friedrich Hayek, stands out as an exception to Mr. Bethell’s catalogue of neglect of property, while in recent years, public choice economists have written with illumination on the topic. But in large part the record of the economics profession in discussing property is blank.

This is surprising, since, Mr. Bethell holds, the case for private property is easily made. To grasp the role of private property, an essential truth must be kept in mind. Human beings have a fixed nature, which governments thwart at their peril.

At the time of the French Revolution, or shortly before it, something new arose. What might be called the Future Perfect began to replace nostalgia for the past. . . . A greater human perfection was to be expected in the future. . . . The great error of Enlightenment thinkers and of more recent philosophers was to imagine that human transformation would be a i straightforward business. But human nature proved more intractable . . . than was imagined.

Very well, then: human nature is not so malleable as Bernard Shaw and the Webbs held. Few today would deny this, but how does the fact of a fixed human nature suffice to make the case for property? In Mr. Bethell’s view, the argument is simple. People tend to place their own well-being, and that of their families, above a murky “common good” defined by the state. Thus, if property is made collective, disaster will quickly follow. Under a system without private property, an individual has little incentive to conserve resources. Instead, he will seize as much as he can for his immediate benefit; if he does not, others will quickly step into the gap. Moreover, only a regime that mandates individual property rights can avoid what Garrett Hardin has memorably called the “tragedy of the commons.” With secure property rights, an owner will not scuttle his long-term gains through indiscriminate exploitation of land. Instead, he will endeavor to maintain his property since it is as an economic asset.

But is not this argument simply an instance of the ancient fallacy, that human beings are narrowly selfish, unmotivated by the good of others? In the guise of a defense of human nature, has not Mr. Bethell attempted to foist on us that discredited construct, homo economicus?

Mr. Bethell readily turns this objection aside. Let us suppose that someone did limit his own use of commonly held land, hoping thereby to aid conservation. He would fail utterly in his purpose. He would merely provide those more self-interested than himself with more land to exploit. The main point is incontestable, and Mr. Bethell ably illustrates his case with many historical examples. These include Plymouth Plantation, where Governor Bradford quickly learned that a community without private property in land was “afflicted by an unwillingness to work,” and the New Harmony Utopian socialist colony founded by Robert Owen. Mr. Bethell duly notes that the fortune of that sainted philanthropist rested in part on child labor.

But on one point I must issue a caution. We know, as Mr. Bethell has ably argued, that common property is inefficient. No general argument shows how inefficient it must be when compared with a system of individual property rights: This we must discern from examination of the individual case. Thus, when Mr. Bethell, with a brilliant suggestion, ascribes Irish poverty in the 19th century to the uncertain tenure of land, it does not at once follow from the “tragedy of the commons” argument that he is right. A system of firmly embedded property rights would have led to more efficient land use than the radically uncertain settlement in place there, but how much good such a system would have caused remains a subject for further research. If Mr. Bethell has not fully proved his case on Irish poverty, though, he has immensely aided the discussion through his hypothesis.

A further problem confronts any society that attempts to do away with private productive property altogether—the famous economic calculation argument advanced by Mises and Hayek. Absent a capitalist market, a centralized economy has no means of deciding how to allocate resources. Engineering calculations alone will not tell the planner whether it is a good idea to construct a bridge with platinum. How can he make the decisions needed to assign economic goods to their best uses? Readers should note that this differs from the “tragedy of the commons.” The latter argument involves incentives; the calculation argument does not. Even people totally devoted to the common good would, in a centrally directed economy, confront the calculation problem.

Mr. Bethell locates another difficulty for any regime foolish enough to strike against private property comprehensively.

[T]here was a more fundamental problem. The workers were reduced to a state of servitude and had no particular reason to work hard. In being compelled to carry out someone else’s plan, they were prevented from carrying out their own.

Mr. Bethell, apparently, cannot for long stay away from incentives, and with good reason—the issue is crucial. As he notes, this argument received its classic statement in Hayek’s Road to Serfdom, but he also suggests that Hayek took over and developed his case from Walter Lippmann’s The Good Society. How remarkable that the Great Pundit managed for once in his long career to get something right!

The case for private property goes beyond incentives and efficiency. More broadly, Bethell claims that justice itself demands individual property. He rejects the view of justice as egalitarian fairness, famously advanced by John Rawls in A Theory of Justice (1971), and resolutely adheres to the classical view of Aristotle and Aquinas, who thought that justice gives each person what is his due. Each person in an economy based on private property receives the results of his own abilities and character.

The industrious will reap the benefits of their industry, the frugal the consequences of their frugality: the improvident and die profligate likewise. They receive their due, which is to say they experience justice as a matter of routine. Private property institutionalizes justice. This is its great virtue, perhaps dwarfing all others.

Mr. Bethell dismisses with appropriate scorn Rawls’ contention that abilities, since they arise from the “genetic lottery,” are collective assets best placed under control of the welfare state. In one respect, though, he pushes his argument too far. He suggests that, contrary to its critics, a market svstem minimizes selfish behavior. “A selfish person is one who takes an unfairly large share of some common good, thereby leaving unfairly small shares for everyone else.” Situations that lack well-defined property rights render selfish behavior possible.

The argument is ingenious, and it suffices to explain many cases of selfishness—but by no means all. Would not a person who assiduously seeks gifts and favors from others, but never acts generously save under compulsion, be considered selfish? And yet no problem of collective goods need be involved in this case.

The argument for private property has many implications for contemporary policy. Mr. Bethell suggests that our high-minded Masters of Wisdom in Washington have made a fetish of democracy. A Western-style political system can function only in a reasonably prosperous society, and this requires private property. A regime that moves toward a free market may have much to recommend it, even if it ranks abysmally on the index of the Americans for Democratic Action. Mr. Bethell’s point needs to be taken to heart by self-styled conservatives anxious to embroil the United States in a conflict with China that could only serve further to collectivize both countries.

A few details in the book can be challenged. Wesley Hohfeld’s definition of rights has nothing to do with Hegel’s philosophy: Mr. Bethell has not grasped the quite simple logic of that influential system of legal categories. To call Frederic Maitland one of those who wrote “at a time when centralism was admired across the board” oversimplifies matters. Maitland (a great legal historian) was greatly influenced by the concept of pluralism, a decidedly anti-centralist trend of thought. To support his incontestably true point that socialism leads to dictatorship over workers, Mr. Bethell frequently refers to a spurious passage from Trotsky’s The Revolution Betrayed. Some years ago, I quoted the same passage and was properly taken to task by Mr. Williamson Evers of the Hoover Institution.

But these are only minor points. Mr. Bethell has written a clear, cogent book that both sums up and advances our knowledge of property. In learning and suggestiveness. The Noblest Triumph is a triumph indeed.