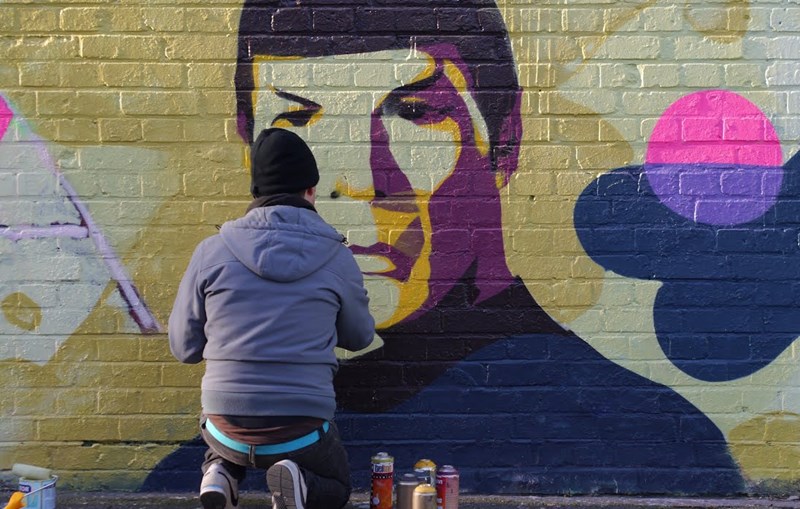 From the July 1995 issue of Chronicles.

Gene Roddenberry was a hustling ex-cop who wanted to strike it rich in television, and he did, with a series called Star Trek, which he once described (before his slide into self-mythicizing and lucrative licensing deals) as “Wagon Train To the Stars.” His public image has heretofore been that of the atheistic Gentle Ben of science fiction, a bear of a man who injected his sunny humanism into weekly TV and changed the world. Joel Engel, whose scathing new biography blasts from the sky the man who liked to be called “the Great Bird of the Galaxy,” claims that “his indirect impact on aspects of popular culture these last three decades has been eclipsed, arguably, only by Elvis Presley.”

Eugene Wesley Roddenberry was born to a lineman for the county (El Paso) and a devout Baptist mother. When he was two, the family moved to Los Angeles, where the elder Roddenberry became one of the LAPD’s finest. Gene was a “gangly, unathletic, and sickly” boy, as most creative sorts are. As a teenager he had the usual wise-guy view about the literal incredibility of religious rites: “How the hell did Jesus come to be something to be eaten?” he wondered, and he smirkingly dismissed partakers of communion as “a bunch of cannibals.” This conviction he took to his urn.

Roddenberry copiloted a B-17 in the Second World War, and after his discharge he flew for Pan Am as a “glorified bus driver.” He joined the LAPD and wrote speeches for its chief William Parker while learning the craft of television sereen-writing. He sold to Dragnet and Dr. Kildare and Have Gun, Will Travel before breaking in as a producer of the short-lived series The Lieutenant. Then came Star Trek, which debuted in September 1966 and lasted but three seasons, a victim of middling ratings and declining quality, though among its 79 episodes are some real gems written by the likes of Harlan Ellison, Richard Matheson, Robert Bloch, and yes. Gene Roddenberry. Or at least credited to Roddenberry. Engel calls Star Trek‘s creator the “mutable man”: he depicts him as a supple liar, a thief who swiped credit for work his underlings did while the Great Bird was nesting with actress-models in his aerie, hi doctoring scripts he had a knack for turning the mot juste into the (blessedly homonymic) mot faux.

“Nearly everyone who worked with him regularly in a creative capacity on any incarnation of Star Trek eventually disliked or distrusted him,” says Engel. When Roddenberry wasn’t ham-fistedly botching dialogue or avariciously cutting deals, he was a maundering drunk going on and on about his “creative juices,” most of which were spilled on things other than Star Trek. Harlan Ellison, who wrote the outstanding episode “The City on the Edge of Forever” (the one with Joan Collins as a purebred pacifist social worker in Depression America), scoffs that Roddenberry “could barely write.” In a sense Engel’s book is a brief on behalf of the studios and executives who have long been cast as demons in the hackneyed play Visionary Artist Versus the Soulless Men in Suits. As such it is a useful corrective, though Engel’s sources have their own axes to grind, and calumniating the dead is a coward’s game.

Roddenberry was often praised for understanding that space exploration would not be the exclusive realm of white men, but of the three women he cast in Star Trek, two were his mistresses (Nichelle Nichols as communications officer Uhura and Majel Barrett as Nurse Chapel) and the third, bombshell Grace Lee Whitney (Yeoman Rand) was, one suspects, at least on his wish list. Like most of the probable candidates for the 1996 Republican presidential nomination, Roddenberry dumped his frump of a first wife for a hotter number—Majel Barrett, who became the second Mrs. Roddenberry—once his ship docked.

Nichelle Nichols—and whatever you do don’t call her an intergalactic telephone operator; she’s the kind of black woman who emphasizes the word professional—has written her own memoir, Beyond Uhura, and it is not a bad read. She was a dancer whose father (like Zora Neale Hurston’s) was mayor of an all-black town, in Nichols’ case Robbins, Illinois. Old flame Roddenberry cast her in Star Trek—over the objections of racist NBC executives, she claims, though Engel maintains that the network was eager for black faces in supporting roles.

Her thespian muscles atrophied after a few dozen rounds of “hailing frequencies open. Captain,” and Nichols says she threatened to quit the show after its first season, but then at an NAACP soiree Martin Luther King, Jr., approached her and pled: “You must not leave. . . . For the first time, the world sees us as we should be seen, as equals, as intelligent people—as we should be. There will always be role models for black children; you are a role model for everyone.” Nichelle stayed employed for the greater good of humanity.

Another fixture on the bridge, George Takei as Mr. Sulu, has also produced a readable autobiography. Takei, whose family was interned in FDR’s concentration camps for Japanese-Americans, describes the frustrations of an Asian actor in Hollywood. (His first job was dubbing the hilarious monster flick Rodan.) Takei has inhabited Sulu for nearly three decades; like Nichols, he is sensitive to slapstick scenes in the Star Trek movies that he considers infra dig. hi the sixth Star Trek film, Sulu gets his captaincy, and Takei’s obvious pride is both touching and a touch eldritch: actor and role have merged, and I have a feeling that when George is beamed up from our own planet he will be swathed in red velour.

Nichols and Takei are grateful (for good reason) to Roddenberry; the mendacious dipso of Engel’s book is replaced by the backslapping prank-pulling genius of legend. The villain of the universe according to Sulu and Uhura is the Canadian ham William Shatner—Captain Kirk—who comes off as a self-absorbed Hollywood phony that Budd Schulberg and Clifford Odets might have dreamed up on a particularly bitter night. “Bill is not going to be satisfied,” Takei once quipped, “until we’re all gone and he gets to do all our parts.”

The standard line is that Star Trek shimmers with optimism. “There seems to be a compulsion among writers to picture the future as totally computerized, inhumanly authoritarian, and coldly big-brotherish,” Roddenberry complained in one memo. Not Star Trek, he boasted. Yet the series is JFK New Frontier Cold War liberalism in space: lofty sentiments about brotherhood float around the bridge, and hey darky won’t you answer that phone? The Enterprise crew is duty-bound to follow “The Prime Directive,” which proscribes “interference with the normal development of alien life and societies.” Yet in their planet-hopping they destroy gods and tear down superstitions and inflict the blessings of reason and technology on benighted aliens. Imagine Ayn Rand as the Queen of Outer Space, killing mystics and re-educating eccentrics, and otherwise setting the universe free.

Roddenberry’s outline for the episode “The Return of the Archons” imagines a stagnant planet becalmed by religion: “What can be seen on the street, the happy friendliness and tranquillity, masks despair, dullness, almost a living death.” So Kirk and company demolish the Archons’ god: things will be swell in no time, we are sure, though Star Fleet may have to hunt down and torch a fugitive warlord or two. At these moments Star Trek, though entertaining, gives us an armed Peace Corps of smug blunderbusses; kind of a best-case scenario of a World Federalist future. That this universe would be as inhospitable to Gene Roddenberry as it is to pious Archons may never have occurred to its creator. After Star Trek, Roddenberry’s own star dimmed. He wrote and produced the Rock Hudson black comedy Pretty Maids All in a Row, a Roger Vadim flop. Hard up for money, he penned a screenplay for an exotic band of British psychics known as “The Nine,” whose transworldly sources informed them that in past lives Roddenberry had been Moses’s grandson, Peter’s father, and maybe Jupiter himself. The things a skeptical humanist has to do to put bread on the table and coke up his nose. He was largely excluded from the production of the first six feature films of the Star Trek franchise, though they tickled his cupidity. (Like the series, the movies are best when they feature swashbuckling and needling camaraderie, and worst when they fog up in vaporing about the meaning of it all.) Roddenberry hit bottom with the execrable Star Trek: The Next Generation, the tediously didactic syndicated series which ran from 1987 to 1994. The 24th-century bores who populate The Next Generation “are not perfect,” conceded Roddenberry in the series bible for writers, “but their flaws do not include falsehood, petty jealousies and the banal hypocrisies common in the 20th century.” The man lamenting our foibles was recalled by Leonard Nimoy (Mr. Spock) in this way: “My business dealings with him were always miserable. Gene always had an agenda—his own. I didn’t see him step up to bat and be the decent honorable humanist that he portrayed himself to be.”

Gene Roddenberry died in 1991 at the age of 70. Engel dismisses him as a tin-eared windbag whose eternal flame was his desire to be a writer while doing as little writing and as much fornicating as possible. This seems excessively harsh: a coeval biography, a pedestrian job by a Roddenberry buddy, paints the subject as a chummy and brilliant visionary, and the affectionate recollections of Roddenberry’s friends—including Ray Bradbury, one of America’s finest living writers—suggest that for all his flaws he had the Spark.

I had not seen an episode of Star Trek in probably a dozen years, but after finishing these books I sat through several hours of its comfortable exoticism: the Enterprise’s engines lose power. Kirk seduces superlunary babes. Dr. McCoy drawls wisecracks, Spock arches his eyebrow, the rainbow supernumeraries chirp about warp speed and hailing frequencies and courses plotted, and I sat mesmerized by the sweet familiarity of it all. Much as we might jeer at Moondoggles and military shuttles, space exploration stirs the soul, and in sending this ensemble out to strange new worlds, orbs of ice and lava populated by mad scientists and green wenches with remarkably human contours. Star Trek was more than a pleasurable time-waster: it was lovable. One hopes, for Roddenberry’s sake, that the God he reviled shows mercy on Gene, and allows the poor sinner to spend the afterlife in his cherished void, where no man has gone before.