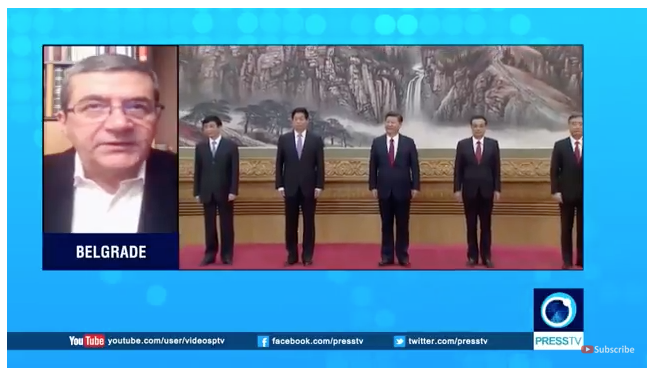 In an interview with the Iranian English-language network Press TV Srdja Trifkovic discusses the significance of President Xi Jinping’s emergence as China’s most powerful leader in decades, following the end of the Communist Party congress on October 25.

Q: What do you think of Xi’s reelection, considering the fact that there is no heir-apparent?

ST: It looks like Xi is preparing the ground for an extension of his second term. So far, the most remarkable feature of the post-Deng period—over three decades of stability and phenomenal prosperity—has been the regularity of new leaders’ election. After three decades China seems to be reverting to greater authoritarianism, which nevertheless will go hand-in-hand with economic liberalism. This is apparent in the selection of six other members of the Standing Committee of the Politbureau whose names were released on October 25. It is apparent that, by replacing five of the members of the Standing Committee, Xi has effectively packed this supreme body with his loyalists and trusted aides. Far from replicating the personality cult of the Mao era, Xi was in fact preparing the ground for a extension of his second term after a total of ten years. Whether this will be coupled with continued economic prosperity remains to be seen. If it is, then it will fit the old Chinese Confucian tradition of “heavenly mandate”: the emperor who is endowed with the fruits of stability, prosperity and peace deserves to reign.

Q: Moving away from internal issues and looking at global aspects of Xi’s reelection, in his closing remarks he spoke of plans to have a stronger People’s Republic. How will China under him balance the U.S. power in the region?

ST: I think it will be done more assertively than before. It is interesting that his thoughts which were included in the charter (or the “constitution”) of the Communist Party included reference to “a new era,” or “a new period.” Xi divides the post-1949 communist history of China into two periods, the three decades of consolidation of power and independence under Mao followed by over three decades of prosperity under Deng and his successors.

Now he wants to preside over the third period, that of China’s increased standing in the world. It symbolically started two years ago with the militarization of islands in the South China Sea and will continue with China’s projection of both soft and hard power abroad, soft primarily—not least in the Middle East, in the Caspian basin, and in southern and central Europe, from Greece via Macedonia and Serbia into the heart of Europe. At the same time, he will play a clever game with North Korea. The United States must be aware that intervening militarily to dismantle North Korea’s nuclear arsenal would be extremely risky and costly, and that China is the only outside power that really has the levers to influence Kim Jong-Un. China’s continuing economic strength and her trade surpluses with the United States mean that China will not want to force an issue—not as yet.

In the fullness of time, the United States and China will be natural geopolitical rivals. Once the Chinese feel strong enough to put the issue of Taiwan on the table, and to break out of the island chain, there may be the potential for a real conflict with the United States. I don’t think Xi believes that China is ready for that. He will carefully balance an increasingly high profile in international affairs, the projection of primarily soft, economic power abroad, with biding his time. After all, it is an empire with two and a half millennia of history.