Weighing in at more than 500 dense and provocative pages, Charles Taylor’s Sources of the Self (Harvard, 1989) was clearly not intended for the general reader; at just over 100 pages. The Ethics of Authenticity is much more accessible. While not a fully “polished” work, this slim volume is so full of valuable insights I am tempted to say that reading it is a moral duty for contemporary Americans.

A practicing Roman Catholic, Taylor until recently taught political philosophy at Oxford and was perhaps best known for his writings on Hegel. Politically he is a man of the left who has run for Parliament in his native Canada as a candidate for the New Democrats, on economic issues significantly more radical than the American Democratic Party. Still, there are many points of contact between his thought and traditional conservative concerns; more than anyone else, conservatives should profit from an engagement with the ideas of this remarkable thinker.

Taylor begins by describing “three malaises” of modernity. First, the “modern freedom” won at the expense of “older moral horizons” and social hierarchies has led us to a disenchanted “individualism” characterized by a “centering on the self, which both flattens and narrows our lives, making them poorer in meaning, and less concerned with others.” Second, the “primacy of instrumental reason,” with no evaluative criteria beyond “maximum efficiency,” has produced a technological civilization while destroying the language of moral ends, reducing human relations to the level of a commodity to be bought and sold, and generating a fear of impermanency in the face of revolutionary technological developments. From these two predicaments, a third, essentially political, malaise (foreseen by Tocqueville) follows: the loss of genuine freedom to the “soft despotism” of a bureaucratic state, as the liberated individual finds himself unable to maintain an identity against the grain of prevailing opinions and social forces.

Taylor’s concerns are familiar to readers of Richard Weaver, Allan Bloom, and Alasdair MacIntyre. But Taylor poses a challenge that should startle us into reflection. Focusing on the problem of moral freedom, he believes that conservative critics are right to condemn the “trivialized and self-indulgent forms” of the “individualism of self-fulfillment” that are now so prevalent. He also believes, however, that these manifestations are not simply a matter of “moral laxity,” which, as such, is a constant in human experience; rather, because they arise from the pursuit of a genuine “moral ideal,” they are the historically novel expressions of the specifically modern notion of “authenticity.”

Thus, Taylor observes, many people today feel compelled to “sacrifice their love relationships and the care of their children to pursue their careers,” in order to be true to themselves. This situation presents a new challenge for moralists. Though Taylor believes that such choices are most often made in error, simply to condemn those who so choose is, he argues, ultimately a futile response. What is required instead is to ask why moderns so often choose poorly and how they might choose otherwise.

The purpose of this book is to call moderns back (or forward?) to what we might call an “authentic authenticity.” Taylor proceeds by asking, “What are the conditions in human life of realizing [such] an ideal?” I low is it that one is really true to himself? hi answering this question, he focuses on the “dialogical” nature of human self-development. Taylor argues that we acquire our distinctive humanity only through language, for without language—the logos—we are mere animals. Language in turn is acquired through others. It is a moral fact, which we must respect, that there can be no human self without encounters with other selves. Man’s nature is radically social. From such a perspective, we can begin to see why a “monological” notion of the self understood only as “disengaged rationality” is in error. Yet this monological, or Cartesian, view is most likely responsible for the widespread moral subjectivism we encounter today.

Elaborating on the implications of the dialogical self in a chapter titled “Inescapable Horizons,” Taylor argues that any attempt to free the self from its dependence on conventional values (as the undergraduate slogan puts it, “all values are socially constructed”) is ultimately self-defeating. If we deny the existence of moral “horizons,” nothing can be in the “foreground,” nothing can have moral importance or be a moral ideal. The attempt to escape a shared moral world by purely subjective choice therefore does not simply open up space for the idiosyncratic values which we (mis)take to be authentic for us, but rather trivializes all values into equal insignificance, defeating any moral purpose. Taylor writes.

Self-choice as an ideal makes sense only because some issues are more significant than others. . . . Which issues are significant I do not determine. If I did, no issue would be significant. But then the very ideal of self-choosing as a moral ideal would be impossible. . . . Authenticity is not the enemy of demands that emanate beyond the self; it supposes such demands.

Contrary to the conventional wisdom, choice cannot be what “confers worth.” The only place we can find our authentic selves is in our communities.

Taylor is perhaps most disappointing in his political prescriptions. At the end of the book he addresses the danger of Tocqueville’s soft despotism, which he interprets primarily as social fragmentation brought about by a politics structured around, first, the adjudication of rights, and, second, pressures exerted by special interests. Taylor believes that “there is a great deal of truth” in the description of the twin powers of bureaucracy and the market as an “iron cage” that traps us helplessly in comfortable servility and disunity. But he ultimately rejects this implicitly revolutionary metaphor to encourage instead an organized resistance to or struggle against soft despotism.

In order to resist the iron cage, the “galloping hegemony of instrumental reason,” Taylor suggests the need for “democratic will formation”—for empowerment by means of an experience of popular efficacy in a common moral project for a common good. His model is the environmental movement, where at least some people have come to feel a collective responsibility. But the language of democratic will is not the language of moral obligation, and it is odd to see Taylor effectively repair to Rousseau when he seeks a model of authentic political life. He seems on surer ground when he emphasizes alternatively the possibilities of a decentralized federalism (states’ rights?), which seems to derive from the Catholic principle of subsidiarity. But here the unanswered question is how one defends such an arrangement against the imperatives of efficiency and equality, which at present override the pursuit of local goods. Taylor does not seem fully to recognize how far his principles lead him away from social democracy.

In The Ethics of Authenticity, Charles Taylor has sketched an intellectual and political program to save modernity from itself. He is convinced that the attempt is worthwhile. Those of us less certain that modernity is worth saving nevertheless have an obligation to enter into dialogue with so generous and sympathetic a critic. 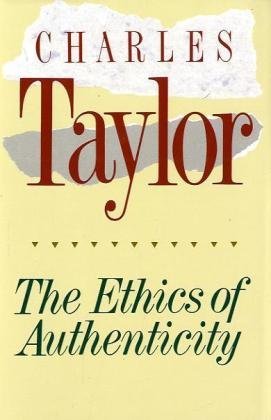 This article was pulled from the September 1993 issue of Chronicles.

Previous PostSyrian Showdown: Trump vs. the GeneralsNext PostIs Trump Standing Down in Syria?