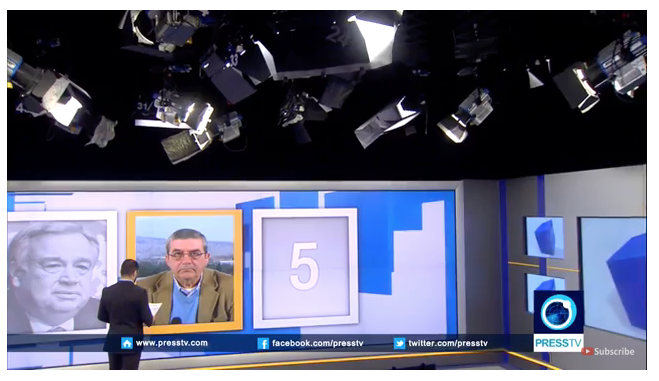 In his latest interview for the Iranian English-language TV network, live from their studio in Beirut, Srdja Trifkovic discusses the developments surrounding the Korean peninsula. [Watch interview here.]

Q: Foreign affairs editor of Chronicles magazine Srdja Trifkovic joins us via satellite from the Lebanese capital Beirut . . . First of all, what are your impressions of the comments by the South Korean president Moon Jae-in, with regards to lowering the threshold of talks with North Korea.

ST: It is interesting that he called both on the United States and North Korea to “lower the threshold.” In a way, the U.S. ally South Korea was acting as if it were keeping a somewhat equidistant position between Washington and Pyongyang. Of course in substance this is not the case, but the South Koreans have every reason to be extremely worried. Let me draw your attention to a remarkable statement by the Republican Senator James Risch of Idaho, at the Munich Security Conference the week before last. He said that if North Korea does not give up its nuclear program, President Trump has the option to wage a brief war of biblical proportions. He even said that it would be one of the most catastrophic events in the history of our civilization. There would be mass casualties, the like of which the world has never seen.

Now, Senator Risch is the next in line to become Chairman of the U.S. Senate Foreign Relations Committee if Sen. Corker does retire, as he had announced he would. This is extremely alarming. This is also an extremely disappointing statement from the White House. Vice-president Mike Pence, while attending the winter olympics in South Korea two weeks ago, indicated that the U.S. may be prepared to talk without preconditions. So now we are effectively seeing  the U.S. shifting back to the original hard-line position that any talks must lead to de-nuclearization. This is, of course, something that Kim Jong-un can never accept.

Q: Now that you mentioned the winter olympics, the fairytale meetings between the leaders of the north and the south are over—are we going to see more of the same as regards the tensions on the Korean peninsula, or will there be a decerase of tensions?

ST: If it were up to the South Koreans, there would certainly be a decrease in tensions and all sorts of symbolic gestures, exchanges of visits, and so on. The problem is that the levers of tensions are not in the hands of the actors on the ground. The U.S. attitude will determine the outcome. For as long as the U.S. threatens an outright war against North Korea—a “preventive war” if you will—without the North agreeing upfront to dismantle its nuclear program, the North Koreans of course will reject that. The South has every reason to be concerned. If the push comes to shove, it is the citizens of Seoul and other civilian targets south of the 38th parallel that will pay the price.