This year’s Moscow Economic Forum (MEF) opened on Thursday at the Lomonosov State University under the slogan A New Strategy for Russia. The panelists—prominent academics, businessmen and senior managers—were brutally blunt in their diagnosis of the causes of Russia’s economic woes, and especially critical of the country’s Central Bank for continuing to follow a neoliberal strategy. There is a general consensus that Russia’s economic and financial problems are systemic, and only in small part due to Western sanctions.

Ruslan Grinberg, head of the Institute of Economics and the Forum’s moderator, noted that in the 1990’s everyone was intoxicated by the dogma of the free market: you 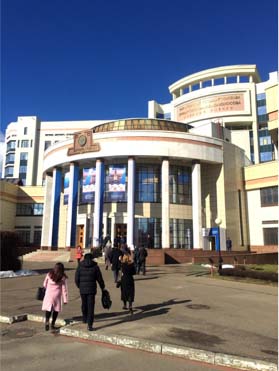 should privatize, deregulate and stabilize. The results were disastrous, but Russia’s economic decision-making community is still not free of neoliberal blinkers. This applies not only to the Central Bank, but also to the economic departments of the Medvedev government. According to Grinberg, “market fundamentalism is dead, but its cause still lives on in key segments of Russia’s ruling elite.”

Economist Vladislav Zhukovsky noted that the economy is supposedly growing, but the country’s human potential has declined. Current spending on education is only 4.1%, instead of 7% of GDP, and health care accounts for under 5%. The overall state of the Russian economy can be described as degradation and compression. It is accompanied by bureaucratization, monopolization, and dollarization. On the other hand, says Zhukovsky, “our officials have discovered a new art form—ever more sophisticated forms of statistical manipulation to draw a beautiful reality in contrast to the deteriorating crisis situation.” According to the latest revised data, in 2015 the downturn officially amounted to only 2.8%, and to a mere 0.2% in 2016, while the real economy was actually growing. Zhukovsky is adamant that this is “statistical alchemy,” and that all key macroeconomic indicators were overrated. In reality, he says, Russia has experienced 26 months of continuous fall of real incomes, by about 17.5% overall.

In an earlier interview Zhukovsky complained that this year’s MEF would be the voice of the entrepreneurial community crying in the desert: “It is clear that none of those who determine macroeconomic policy, and distribute annually a trillion rubles of public procurement, are interested in it. Today we see a strange situation that the windfall in oil and gas complex, metallurgy, raw materials, natural monopolies, in the production of various kinds of fertilizers, technical complex, which has grown over the last 2.5 years, more than 55% in ruble terms, all to no positive effect in the economy. The growth of corporate profits did not affect the growth of investment and wages . . . There is no general strategy.”

Professor James K. Galbraith, author of the seminal 2012 study Inequality and Instability, noted that rising inequality happens in clusters of countries. Extreme polarization occurred between 1990 and 2000 in Russia and other ex-communist countries. There has been considerable stabilization after 2000, however, as many of those countries abandoned the extreme neoliberal model. In recent years Russia has experienced the fact that when currencies weaken, those who sell abroad do better than those who sell at home. Russia’s fundamental problem is the dollar-based global financial regime. Galbraith added that the new U.S. administration does not have an effective economic strategy to preserve and expand a stable and diverse middle class: “We still suffer, and we will continue to suffer, from private affluence and public squalor.”

Oksana Dimitrieva, a guest from St. Petersburg, opened her remarks by saying that the Russian economy was in a chronic stage of man-made crisis. The government stays 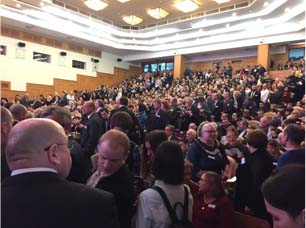 inactive, credit is expensive, there is no budgetary stimulus to investment, no structured new production and no deployment of surplus bank funds left over from budgetary system. In 2016, 90% of money meant to stimulate the real economy entered the banking system. Imports are growing faster than exports, and no import substitution has occurred on any significant scale. Investments are declining, and will continue to decline until “we get rid of the cliché that the Central Bank needs to pass on liquidity to banks.” The mechanism of self-regulation does not work, the private banks provide no loans, and the state has taken no steps to remedy this. State funds allocated for anti-crisis measures, which were channelled to the banking sector, have vanished; where are they now is a mystery.

Prominent economic consultant and former politician Iuri Iurevich Boldyrev commented upon Dimitrieva’s presentation by stressing that the Russian banking community, controlled by oligarchs, has programmed the system to its advantage. There’s no way out for now: “Our variety of capitalism means the government is washing its hands off the banking and insurance system, both of which are designed to maximize private profits by fleecing the public . . . The state forces us to pump income into the pockets of private commercial banks.” Boldyrev’s colleague Alexander Buzgalin concurred by saying that “we have oligarchic-bureaucratic late capitalism. Economic-political power structure cannot be reformed, it has to be replaced.” Russia needs cultural renewal, Buzgalin said, social functions of the state must be renewed; Western-style “democracy,” based on mass manipulation and indoctrination, must be rejected.

Arguably the most prominent Russian economist, Sergei Yurievich Glazyev—President Putin’s long-time advisor—noted that Russia’s share of global economy grew from 1.6% in 1991 to 1.8% in 2015, while China’s grew from 2.2% to 14.8%. The key was in the development of China’s state-sponsored credit facilities to finance investment, and the focus on state-of-the-art technology. By contrast investment activity in Russia is declining, Glazyev warned, the central bank has little influence, and its loans are routinely used only for economic speculation: “We have lost a key financing channel, we are in the trap of stagflation . . . Financial speculators are the only beneficiaries, since the Central Bank had created fantastic conditions for them. They export their profits, and thus support the global banking system. Why should they invest in the real sector, when it is more profitable to speculate?” Targeted investment is the only cure, Glazyev concluded. It is not something new, and it does not mean returning to centralized system of investment. “We can grow 8-9% if we get our investment strategy right,” Glazyev concluded, but the Russian banking system is “sucking money out of the economy,” instead of transforming savings into investments and implementing centralized credit issue: “Nowhere in the world is it possible for the economy to work at interest rates as high as 9.75%. The policy followed by our monetary authorities is exotic, it goes against everything in the experience of today’s world.” 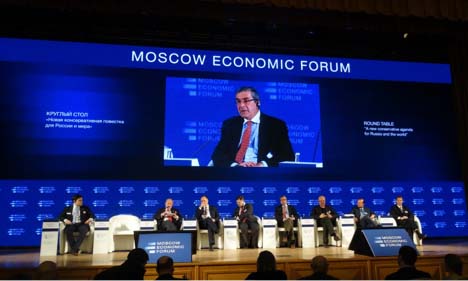 All this was eye-opening information, even for an old Russia hand like me. (My own contribution to the program, in the afternoon session, focused on politics rather than economics.) Russia’s economic and financial situation is more fragile than I had suspected, which in the long run may have serious consequences for the country’s ability to articulate and conduct a proactive global strategy. Three years after the imposition of Western sanctions, structural reforms which could have neutralized their impact have not materialized. They may yet be introduced, but entrenched interests—ideological (neoliberal fundamentalists) and financial (oligarchs)—have created an unholy alliance which is formidable and highly detrimental to Russia’s economic and political health.

You can read the first part here.

Previous PostIs Putin the ‘Preeminent Statesman’ of Our Times?Next PostWhy Is Kim Jong Un Our Problem?