Mad Bombers of the Amazon 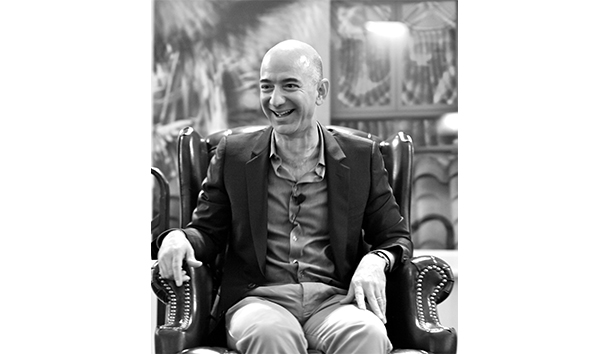 photo of Jeff Bezos by Steve Jurvetson (CC BY 2.0)

Instead of getting life without parole in one of those white isolation cells in the toughest of jails for aiding and abetting terrorism, he is fêted the world over and is among America’s wealthiest men, after Bill Gates and Warren Buffett.  Step forward, Jeff Bezos of Amazon.com, third-richest with 87 billion big ones, but Numero Uno when it comes to physical ugliness.  I admit that my Greek heritage has played a role in my ranking system: The ancient ones believed an ugly countenance came from within and portrayed an ugly soul.

Now back to the reason why this monster belongs in jail.  Like his counterpart, Facebook’s Zuckerberg, Amazon’s Bezos puts profits ahead of lives.  Both men refuse to put controls in place that would impede terrorist bomb-making.  Amazon, in fact, not only suggests what one needs to make a bomb, but prompts the prospective bomb-maker as to what to use for maximum damage: ball bearings, for example.

I write this a few days after a bomb partly went off on a London train.  It was planted by a Muhammad type: 18 years old and from Iraq.  Although unable to speak English, he knew enough to follow instructions on Amazon.  The website actually grouped key bomb components under the “frequently bought together” tab.  Yes, I know it sounds unbelievable, but it gets worse: When a certain chemical is located on Amazon, the ingredients to make black powder are also offered.  As well as ball bearings.  Ignition systems and remote detonators are also available on the colossal retail website.

So what do you think, dear Chronicles reader?  Would I be aiding and abetting the killing of this greedy pig—and my deepest apologies to our porcine friends—if I encouraged some gentle soul to follow instructions on Jeff’s own website and plant it up his rather unattractive backside?  Knowing the government’s abhorrence of true conservatives, I’d end up where Bezos belongs quicker than you can say “Zuckerberg.”  Yet the owner of the Washington Post can flaunt his lefty credentials while aiding and abetting terrorism, and the U.S. government can do nothing about it.  Any online onanist can go to the Amazon website, follow instructions, build a bomb, and blow good people away at will, yet Bezos is walking around free.  Schomeshing very wrong here, as a drunken editor once said.

Theresa May, the British prime minister, has called on Facebook and Amazon to do more to stop terrorists from using their sites to plan attacks and fuel extremism.  It’s like whistling Ave Maria in a whorehouse—useless, and an insult to those who have died from terrorism.  People like Bezos and Zuckerberg wouldn’t care if the Almighty came down and asked them in person.  Money is their god, and nothing else matters.

Silicon Valley pretends that it is in business to make the world a better place.  We might as well say that Bernie Madoff meant well.  But we might also admit that we know why these giant, recklessly irresponsible companies are not subjected to the full force of the law: money.  They’ve got plenty, and the politicians want some of it.  It’s the same thing all over again.  Why are the Saudis allowed to fund terrorism through their mosques, and the palookas in Washington do nothing about it?  Money—what else?

This year, the sale of advertising made up 98 percent of Facebook’s Q2 revenue ($9.3 billion).  If the great American and European public took the time to warn the advertisers that they would stay far away from their products unless Amazon and Facebook stopped playing ball with terrorists, these two lookers would change course in a New York minute.

Wouldn’t the world be a far better place if neither Bezos nor Zuckerberg had been conceived?  Retail shops would definitely be better off, and some people might still be reading books.  Personally, I have never used Amazon; I go to book shops.  And I wouldn’t know how to use Facebook if my life depended on it.  In this respect, I count myself lucky.  The idea that I would be contributing to the fortunes of these two scumbags would surely make me follow Bezos’s instructions, and we all know how that would end: with the poor little Greek boy in prison, but a great hero at last.  And so I say to any potential saviors of humanity who are planning on purchasing his products and following his instructions, you have been warned.