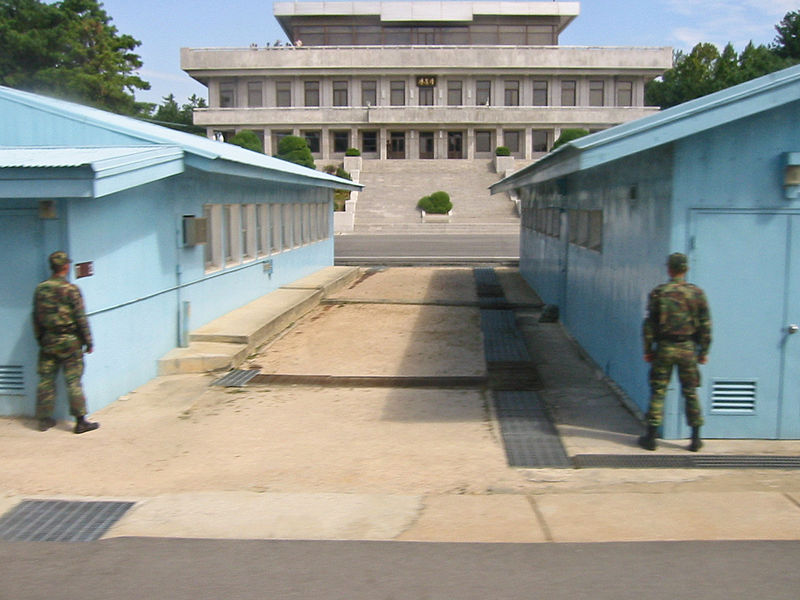 There seems to be no end to the deluge of inane and/or deranged commentary on “the North Korean nuclear threat.” On Wednesday Matt Pottinger, the Asia director on President Trump’s National Security Council, said that “they want to use these weapons as an instrument of blackmail to achieve other goals, even including perhaps the coercive reunification of the Korean peninsula.” He did not explain how exactly would Pyongyang translate its possession of a few small nuclear weapons into an effective tool of forcing Seoul to surrender to its will.

Vice-President Mike Pence sounded far more bellicose while visiting Demilitarized Zone along the 38th parallel on May 1. Pence declared that “the era of strategic patience” was over and that all options were on the table if North Korean President Kim Jong Un continued to threaten the region with his missile and nuclear testing programs. Sen. John McCain went over the top as always, asserting that “a North Korean missile tipped with a nuclear warhead, capable of reaching our homeland is no longer a distant hypothetical, but an imminent danger.” The interventionist consensus was summed up in a Fox News column claiming that “the United States must seriously anticipate the use of force to eliminate this rogue nation’s offensive nuclear capacity.”

“Use of force” means going to war against North Korea. This is a reckless and irresponsible proposition. That Pyongyang embodies a bizarre mix of Stalinism and Oriental despotism is beyond dispute. North Korean soldiers comically emulate their taller Western models in their goose-stepping routine, but the idea is the same: “passo romano” is the metaphor for violent dominance devoid of reason. North Korea is a dystopia unable to feed its cowed serfs—at least two million are estimated to have died of hunger two decades ago—yet it is perfectly capable of unleashing a hurricane of artillery fire against Seoul and other targets in the south at a moment’s notice, killing and maiming tens of thousands of civilians. That is not the kind of protection South Korea needs or wants.

The response of the Truman Administration to Kim Il Sung’s aggression in June 1950 was remarkably swift, bold, and necessary. For many years after the armistice, the presence of U.S. forces in South Korea was justified by the fact that neither China nor the USSR could be trusted to keep the North under control. Since the fall of the Berlin Wall, however, the equation has changed. South Korea is an economic powerhouse with the financial and scientific potential to become a nuclear power at a short notice. It is perfectly capable of deterring North Korea, a fourth-rate power and an economic basket case. Qatar and the Kingdom of Saudi Arabia notwithstanding, the “Democratic People’s Republic of Korea” is the worst country on the planet in terms of what passes for “human rights” and “freedom” among reasonable people. As per the Holy Roman Empire, it is neither democratic, nor people’s, nor a republic. It is “Korean” in the narrow sense of the Kim family’s acceptance of a quasi-nationalist mantle of self-sufficiency (juche); a quick visit to the approved source will give you some idea of the nebulous concept.

North Korea is a bad place ruled by bad people, but the character of its regime is irrelevant to the security of the United. The assertion that the country’s ineptly executed missile and nuclear testing programs can or will be used as a means of disrupting the regional balance of power—let alone deployed as an imminent threat to “our homeland”—is preposterous. Even if it had the wherewithal to threaten the U.S.—which it does not have—North Korea could not do it credibly. A single missile or two would be fairly easy to intercept and destroy; and the ensuing retaliation would turn much of the PDRK into a parking lot. In a few years the North may develop a medium-range device capable of reliably delivering a warhead, but much longer it will have no guidance system necessary for reasonable accuracy. For decades it will lack re-entry technology to develop and deploy an intercontinental ballistic missile (ICBM).

If North Korea does develop functional nuclear missiles some time in the late 2030’s, South Korea and Japan can and should acquire them too, in order to establish a regional balance of terror. This is the only viable model of regional stability. The U.S. and the Soviet Union (later Russia)—followed by China, Great Britain, France, India, Pakistan, and Israel—have had nuclear bombs for many years, but never used them against each other, or their lesser adversaries, or anyone else. Having the nukes makes no difference to China’s stalled efforts to bring Taiwan under its control. South Africa had developed its own nuclear arsenal in the 1980s—it has been dismantled since—but this did not enhance its government’s ability to resist the winds of change in the early 1990’s. It is like having a check for a million dollars that can never be cashed.

On the plus side, ever since 1945 the political effect of a country’s possession of nuclear weapons has been to force its potential adversaries to exercise caution and to freeze the existing frontiers. There is no reason to think that North Korea would be an exception. A coherent American response needs to address the question why North Korea feels it needs nuclear weapons at all. This is not because its regime intends to reunify the peninsula by force, but because Pyongyang regards the United States as an existential threat. North Korea may be the most unpleasant dictatorship in the world, but ever since it was designated the eastern pivot of the “Axis of Evil” in President George W. Bush’s 2002 State of the Union Address it has had legitimate grounds to feel threatened. The Korean peninsula’s partition is unnatural but as inevitable as the German partition during the Cold War. Adopting the same principle in Korea today that was applied to the reality of two German states in 1974, when the United States established diplomatic relations with East Germany, would be prudent and rational, a technical move that implies no approval of Pyongyang’s policies.

For the North Korean regime the possession of nuclear weapons is the only reliable insurance policy against Washington’s regime-change obsession. Had Serbia had the bomb in 1999 or Iraq in 2003, they would not have been subjected to illegal American attacks on patently spurious grounds (“the Kosovo genocide,” “Saddam’s weapons of mass destruction”). As I have previously noted in these pages, removing the American umbrella from South Korea would be beneficial to both sides because the U.S. would be disengaged from a spot where the dangers of continued military presence exceed benefits, while South Korea would be forced to end its unnecessary and ultimately risky defense dependence on Washington:

American withdrawal would prompt South Korea finally to become a mature, self-reliant regional power fully responsible for its self-protection, as befits one of the most highly developed industrial economies in the world. It would also force it to diversify its portfolio of foreign contacts, possibly leading to a Russian-South Korean or a Chinese-South Korean alliance, either of which is preferable to an open-ended American guarantee . . . America has no national interest in retaining troops in Korea or in continuing to protect Seoul. Old habits may die hard, but the 55-year habit of garrisoning South Korea has to be kicked because it is dangerous, expensive, and unnecessary. To the argument that South Korea’s military is not strong enough to withstand the threat from the North, the answer is clear: only by removing our tripwire can America finally force South Korea to upgrade its military and to make its people assume the full economic and political burden of defending their own country. For exactly the same reason American troops should be removed from Japan and Germany. A strategic anachronism five decades old would thus be finally ended.

The strategic miscalculus is now almost 70 years old, but the rest of the verdict from October 2008 still stands. It is in the American interest to withdraw U.S. troops the Korean peninsula; and to recognize North Korea without preconditions. South Korea should be allowed to develop its own nuclear arsenal, and all regional stakeholders—the two Koreas, Japan, China, and Russia—should manage each other as they deem fit. Continued U.S. presence on the 38th parallel is both destabilizing to the region and detrimental to this country’s security.