On Tuesday, July 14, the Irvine, California-based Center for Medical Progress released the first of three videos aimed at exposing some of the horrifying practices of Planned Parenthood, including the harvesting of baby organs through elective abortion for sale to biomedical research groups.  The hidden camera shows Planned Parenthood Federation of America’s Senior Director of Medical Services Dr. Deborah Nucatola enjoying some vino de la casa, loading up her plate with salad, and in between slurps and mouthfuls, blithely observing that “a lot of people want liver.”  Through social media and blogs, the word spread, and outrage was registered by normal, sane people who are able to grasp the meaning of words. 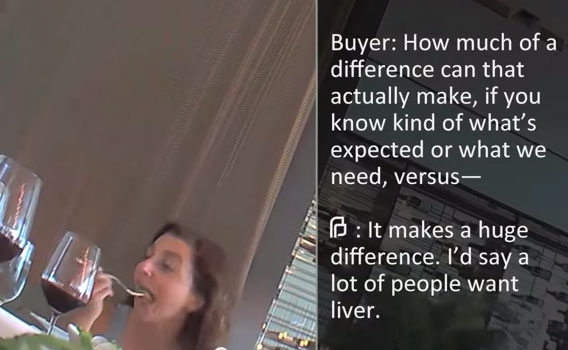 Some of this outrage is misplaced, I think.  Let me explain.

Busy reporting on Bill Cosby, the mainstream media took an entire day to notice the shocking video, allowing for time to figure out how it could respond in such a way that liberals and Planned Parenthood supporters would not be offended.  Ultimately, the coverage seemed to be focussed on converting outrage at Planned Parenthood into righteous indignation toward the Center for Medical Progress, highlighting the connections between the pro-life and James O’Keefe, Lila Rose, fake pimps, ACORN, etc. etc.  Reports also emphasized that the viral video was highly edited (indeed it was), and claimed that it was misleading with regard to the Center for Medical Progress’s allegations about organ sales. In the end, the media avoided offending Planned Parenthood by using Planned Parenthood’s own press release and tweets as the basis for their reporting.

Even Snopes.com, the urban myth buster of the interwebs, found time to post a “fact check” of the viral “Baby Parts for Sale” video, asking, “Does a video show Dr. Deborah Nucatola admitting that Planned Parenthood sells organs from aborted fetuses?”  Now, Snopes can’t answer no, because both the edited video (with its text overlays and ominous music) and the unedited version (forthrightly provided by the Center for Medical Progress) make the answer painfully obvious.  Plus, Planned Parenthood plainly admits that it procures infant parts for biomedical companies and charges something for its trouble, in the very press release it issued in response to the video, which is quoted at length in the Snopes posting.  But Snopes can’t simply say yes, and confirm that the allegation is no “urban legend,” because the plain truth is too horrifying to contemplate.  So the status of reality remains “Undetermined.”

The angle pursued by the video’s producers involves the profit motive and federal law.  Presumably, then, the aim is to shut down all federal funding of Planned Parenthood, a theme nearly every GOP presidential candidate picked up on immediately.  I have no complaint about that potential outcome, though I’m not holding my breath.  For that matter, after-hours airstrikes on all of Planned Parenthood’s properties would suit me just as well.

Quite apart from its now-exposed Frankensteinian fundraising, Planned Parenthood is awash in cash.  In 2014, PPFA, the national headquarters (not the branches) had net assets valued at $279 million.  Cecile Richards, CEO and President, makes just shy of half a mil each year for her duties as Priestess of Molech, and while the Form 990 of Abortuaries Inc. doesn’t mention Dr. Nucatola (perhaps there weren’t enough spaces for key employees making six figures), I’m sure she’s doing fine.

There’s a more than even chance that Planned Parenthood has violated federal and state laws through charging bounties or finders’ fees for fetal brains, hearts, and femurs, “plus twenty percent.”  It’s also a fair bet that PP’s army of lawyers is already in front of this.  Sounding like a member of the Supreme Court, Nucatola declared that “laws are open to interpretation.”

By focussing on federal law and the sale of body parts for research, we are missing the bigger picture: We live among, and are entertained and governed by, inhuman monsters who look like normal people.  Witness this statement in the AP’s accounting of the story: “Commercial sale of human fetal tissue is illegal under federal law.  Noncommercial tissue donation is allowed if the woman undergoing an abortion gives her consent.”  No one—no one—is debating whether this is true.

This is Josef Mengele territory.  Except Josef Mengele conducted his biomedical experiments for the benefit of the master race behind the walls of Auschwitz, before he fled to Buenos Aires after the war, where he worked as an abortionist.

Yes, the sale of murdered children is outrageous.  But that is precisely what the abortion industry in America has always done.  Planned Parenthood openly, boldly, and gruesomely murders children—and charges a fee for it.  Planned Parenthood freely admits to every moral charge that’s being leveled against it and, in the same breath, screams that “these outrageous claims are flat-out untrue.”  What more evidence do we need?  Would a bevy of racist, eugenicist quotations from Planned Parenthood founder Margaret H. Sanger be enough to keep President Obama and Hillary Clinton from lauding her?  Is the sale of dissected babies somehow going to persuade Americans, who think that it’s just fine to throw their corpses in the trash, that infanticide is wrong?  Will GOP candidates now be willing to say that it’s wrong to dismember and discard (or poison and flush) the children of rape and incest victims?  What if the victim wants to donate her legally executed child’s corpse to science?

Nucatola, gulping down food, ever so casually talked about the 18 murders that she’d committed just the day before.  She explained that the Death Squad huddles up at the beginning of each day and goes over the list of organs on the shopping list, so they can avoid crushing too many heads if, say, baby heads are in demand.  Are we listening?  S.O.P for these monsters is to take money to crush tiny heads and “shred livers.”  That’s legal.  Pass the salad!

I reiterate, if the result of this viral video is that federal funding for Planned Parenthood is stopped (and I also reiterate, don’t hold your breath), Deo gratias.  But what sort of society allows Planned Parenthood to exist in the first place?  Why is it that we must heap outrage upon outrage for Americans to notice that the abortion business is sick, disgusting, perverted, and diabolical?

Every abortuary is a house of horrors.  In 2004, when Scott Richert and I took a photographer over to the Northern Illinois Women’s Clinic in Rockford, we saw, as Scott noted in his Chronicles column, truly horrifying sights:

“Dr.” Ragsdale has privileges at two of the hospitals in town, SwedishAmerican and Rockford Memorial.  (St. Anthony’s does not let him in the door.) As we walk back up the alley to Broadway and the front of Fort Turner, I wonder: Do any members of the board of either hospital ever pass by here? If so, what do they think of the rubber chickens hanging in the gable windows, Wayne Webster’s sick slap at the pro-lifers who meet out on the sidewalk every week to pray? Or the signs in other windows: “What the Hell You Looking Up Here For?”; “PROTECTED BY MR. SMITH & MR. WESSON”; and, just to show his concern for his tenant’s “patients,” “BEWARE OF PICKPOCKETS AND WILD WOMEN”? (Previous signs were even worse: “Jesus loves these braindead a–holes,” “These Bible-thumpers suffer from lack-o-nookie,” “Free coat hangers to picketer’s wives and mothers,” “God bless these horny old sweat-hogs.”) Or the mocking little shrine Webster has created of items—a crucifix, a nun doll, a picture of Pope John Paul II—left behind by pro-lifers?

That was the view from the outside.  But what made these things horrifying and not just stupid and crass was the reality of what was going on inside.  These insane icons represented the defiant and unscrupulous attitudes of baby-killers who are pleased both to praise themselves as moral crusaders and to take (lots of) money for it.

By all means, share the video, investigate, call in the fighter jets—but be aware of the profound cultural and spiritual problem that we live with every day in this country, where consciences are seared with a hot iron, and infanticide is tolerated and profitable.  Convert the outrage into prayer, and maybe even volunteer some time at, or support for, your local crisis pregnancy center, where abortions are stopped by loving care and support, and hearts and minds are changed.

Incidentally, Rockford’s House of Horrors, the NIWC, was shut down in 2012 for being an unsanitary hellhole and violating state law.  But the Pregnancy Care Center of Rockford lives on, helping women every day who are struggling with pregnancy.  And The Haven Network is a truly unique independent Christian perinatal hospice (also based in Rockford) that offers counseling and support for women and families who are experiencing infant loss.  Among many other things, The Haven helps a woman whose pre-born child has a terminal diagnosis—the most vulnerable of the vulnerable—to ignore pressure, often from doctors, to terminate the pregnancy and instead to carry the child to full term and cherish whatever moments together they might be granted before natural death.

These organizations are among the most effective tools we have to combat the evil of abortion.  Ultimately, the Planned Parenthood video reminds of what we already know.  Why do we forget?