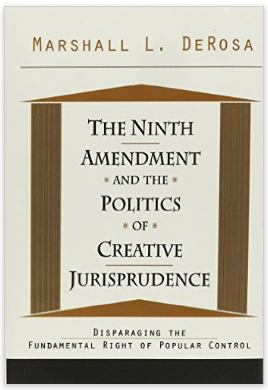 “There is no liberty if the power of judging be not separated from the legislative and executive powers.”
—Montesquieu

The theme that unites the short, somewhat disparate eight chapters of this book is the use by the Supreme Court of unenumerated rights—that is, rights beyond those specifically enumerated in the Bill of Rights—to invalidate state laws. The result of this practice, as DeRosa emphasizes at various points, is that “popular control within the states” over matters of rights and even public policy has been diminished: the Court simply imposes its will, through the medium of unenumerated rights, upon the people of the 50 states. The two cases that most clearly illustrate this process, Griswold v. Connecticut (1965) and Roe v. Wade (1973), are among the most notorious in our constitutional history. From the “penumbras” formed by “emanations” of various specified rights, the Court discovered the unenumerated “right of privacy” (Griswold) that subsequently formed the basis for its invalidation of state anti-abortion laws (Roe).

The first chapter provides a summary view of DeRosa’s concerns, while each of the subsequent chapters deals with various and more specific aspects of creative jurisprudence, unenumerated rights, and federalism. DeRosa emphasizes that the privileges and immunities clause of the Constitution was originally understood to allow the people of the states wide latitude to determine, either through their state constitutions or by statute, what the rights of state inhabitants would be. DeRosa later shows why the father and chief strategist of creative jurisprudence was Roscoe Pound, and sets forth two modern and contrasting views of unenumerated rights and the Constitution: the nomocratic understanding of M.F. Bradford, stressing the need for adherence to original intent and self-government and allowing only a very limited role to the judiciary, and Ronald Dworkin’s rather open-ended “teleocratic” vision that would virtually give the Court unlimited power over the states (and everything else). Elsewhere DeRosa illustrates the more general reluctance of the federal courts to allow the state judiciaries autonomy or latitude in cases involving rights or claims thereto; he laments the Court’s sanctioning of congressional gun-control policies, thereby leaving “a state’s constitutional right of self-defense” to “the discretion of national electoral politics.” In the very brief final chapter, he outlines a suggested constitutional change designed to restore “popular control and a viable American federalism,” the two major “linchpins of the original American constitutional order”: namely, whenever a majority of state “chief judicial officials” (one per state) declares a decision of the Supreme Court to be unconstitutional, that “decision shall thereby be negated and precedent restored.”

Despite this, DeRosa’s concerns regarding juridical imperialism are well taken. This imperialism, however, has come about almost entirely through the 14th Amendment and enumerated rights. Indeed, the Court can accomplish pretty much what it wants with enumerated rights alone, thereby obviating the need to recur to the Ninth Amendment. It can invent extraconstitutional concepts such as a “wall of separation,” “compelling state interest,” or “exclusionary rule” to expand or twist the meaning of enumerated rights; it can expand or contract “due process,” “equal protection,” or “liberty” to suit its fancy; and, if all else fails, it can resort to “substantive due process” or “substantive equal protection.” Recourse to the Ninth Amendment would thus indicate a sterility of the imagination, an affliction extremely rare among judicial activists engaged in interpreting the Constitution.

DeRosa’s analysis does help us to understand the erosion of the Philadelphia Constitution. It leads us to appreciate, for instance, that the intellectual heavyweights of the founding era were essentially correct when they argued that a Bill of Rights was both unnecessary and dangerous. As DeRosa points out, the Bill of Rights was intended to limit the powers of the national government, even though Madison (the so-called father of the Bill of Rights), being still in his nationalist phase, was not about to insert into it any of the things that hard-core Antifederalists really wanted, such as amendments that would substantially weaken the new national government. The main difficulty with a bill of rights, as Hamilton, Wilson, and Iredale, among others, pointed out, was that placing such limitations on the national government could give rise to the notion that government, rather than being one of the enumerated powers as designed, is one of the plenary or restricted powers. Madison made this point succinctly in the Virginia ratification debates when he rhetorically asked, “If an enumeration be made of our rights, will it not be implied that everything omitted is given to the national government?” The Ninth and Tenth amendments, thus, were clearly intended to plug the hole created by the limitations contained in the prior eight amendments; that is, they were to preserve the integrity of the original constitutional design of a national government possessing only enumerated powers.

The reasons for the Ninth and Tenth amendments were well understood by constitutional scholars until relatively recent decades, when ideologically motivated law professors and judges, and misguided libertarians, displaying an embarrassing ignorance of our constitutional history, ripped the Ninth Amendment out of its constitutional context. If their view should prevail, and the Ninth Amendment become part of the “judicial arsenal,” the results will even be more disastrous than DeRosa predicts. To be sure, the scope of state sovereignty will diminish even more, but new avenues for judicial tyranny will open up: the Court will be able to decree “constitutionally mandated” public policies more readily and with virtually no limitations, save those that a majority of the Justices might impose. Such a development, entailing the collapse of the separation of powers and the rule of law, would remove whatever doubts remain about the death of the Philadelphia Constitution.

In this regard, DeRosa’s book points to two analytically separate problems. The more important one is judicial tyranny, whose source and sustenance is the Bill of Rights and the 14th Amendment. A secondary problem (though primary, it seems, for DeRosa) is that of preserving a viable federalism. But the kind of federal system DeRosa, Bradford, and others of similar persuasion want is impossible unless the judiciary, at all levels, can somehow be corralled. Suppose, for example, we manage to achieve an effective “judicial federalism” along the lines described by DeRosa, wherein the task of fixing the meaning and scope of rights falls to the state judiciaries. What is to guarantee that we would not eventually end up with 50 judicial tyrannies?

Here I do not mean to detract from the thrust of DeRosa’s argument relative to the Court, rights, and federalism. His emphasis on the Court and on rights, not on Congress and the commerce powers, as the major cause of federalism’s decline, is on the mark. Of course, Congress has abused its commerce powers. Yet these politically correctable abuses pale when set beside those of the Court. After all, Congress did not order busing, prohibit voluntary prayer in the schools, legalize abortion on demand, or cripple our system of criminal justice. And we would do well to remember this in our efforts to restore constitutionalism.

From the September 1996 issue of Chronicles.