Running the Big Khan in Philly 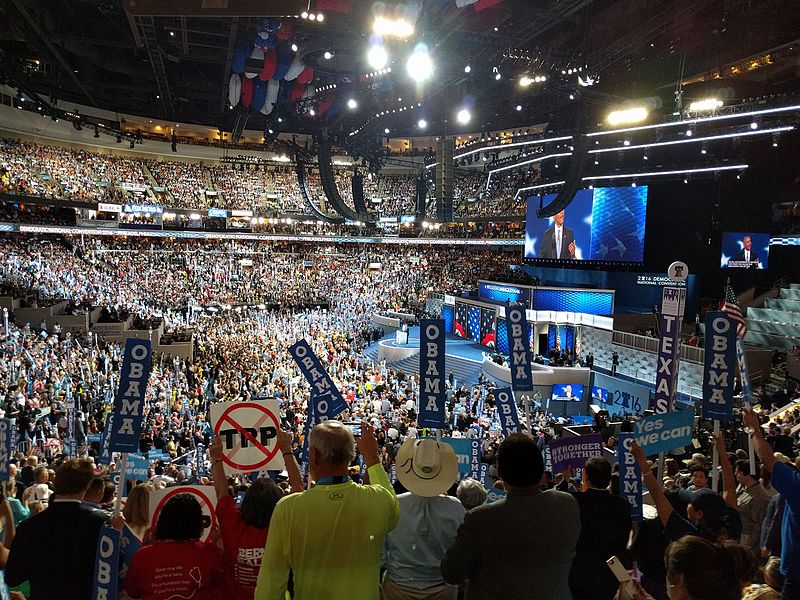 On NPR, Audie Cornish’s guests David Brooks of the New York Times and E.J. Dionne of Pravda on the Potomac (a/k/a the Washington Post) chortled with glee that Hillary had successfully stolen the jingoism card from Trump. In Brooks’ absurdly sweeping claim:

Seriously, he said that. But nary an opposing voice was heard to disturb a consensus worthy of the Bandar-log: “We are great. We are free. We are wonderful. We are the most wonderful people in all the jungle! We all say so, and so it must be true.”

Scoundrels feigning patriotism is one thing, but the starring act in Philly was the appearance of Mr. and Mrs. Khizr Khan, parents of Captain Humayun Khan, killed in Iraq in 2004 in a pointless war Hillary supported but Trump didn’t. Ever since, Mr. Khan’s accusations have been accorded saturation coverage, amplified by a full-spectrum media echo chamber featuring a parade of expert commentators scrupulously balanced between liberal Democratic Trump-haters and “conservative” GOP Trump-haters. (If nothing else, everyone’s now forgotten all about the DNC’s thumb on the scale to fix the Democratic race for Hillary, except to note that the Russians must be behind hacking the patriotic Democrats’ emails because Moscow wants to elect Treasonous Trump, the ultimate Putin Troll.)

Let’s stipulate that by all accounts Captain Khan died “a hero to our country,” and his dad seems a “nice guy,” as Trump has said. But how does that validate the substantive points that Mr. Khan made? Let’s address just two:

1.   Mr. Khan: “If it was up to Donald Trump, he [Captain Humayun Khan] never would have been in America.” Mr. Khan refers to Trump’s earlier advocacy of a temporary ban on Muslims’ entering the United States, not his later shift to restricting anyone—not just Muslims—seeking entry from a “terrorist nation.” (For what it is worth, Trump was right the first time. Who’s more of a potential threat entering the U.S.: a Christian from Syria, Iraq, or Iran, or a Muslim from Paris, Brussels, or London?)

But let’s take Mr. Khan’s point at face value and suppose that he and his wife, and hence their son, would not have been in America under the original Trump concept. That would also mean we would not have had admitted the Afghan parents of the Orlando killer, the Pakistani parents of the San Bernardino killer (and his co-jihadist Pakistani bride), the Palestinian parents of the Fort Hood killer, the Chechen parents of the Boston bombing killers, and others less well known. So what is the fair tradeoff between the harm inflicted on America and the mourning families of dozens of victims by the jihadist progeny of these aliens, versus the good Captain Khan did that presumably would have been lost? (Let’s leave aside the unknowable It’s a Wonderful Life hypothetical about what would have happened in an alternate universe: “Every man on that transport died. Harry wasn’t there to save them, because you weren’t there to save Harry.”)

2.  Mr. Khan: “Donald Trump, you are asking Americans to trust you with our future. Let me ask you: Have you even read the U.S. Constitution? I will gladly lend you my copy. In this document, look for the words ‘liberty’ and ‘equal protection of law’.” Has Mr. Khan, or any of those trashing Trump, even read the Constitution? Can they show one place where it requires the U.S. to apply domestic “equal protection” standards to admission of aliens? Our laws on issuance of visa to immigrants and visitors contain all sorts of criteria that would be impermissible at home. We favor admission of the wealthy (so-called “millionaire” investor visas) and disfavor the poor (barring those “likely to become a public charge”). We effectively discriminate on the basis of national origin via several visa categories that impose country quotas. We have even discriminated on the basis of religion, for example during the 1970s and 1980s favoring Soviet Jews, Pentecostals, and Evangelical Baptists over other groups. At this very moment, the Obama administration effectively gives Syrian Muslims preference for refugee and asylum status over Syrian Christians, despite the fact that the latter are targeted by the Islamic State, al-Qaeda, and U.S.-supported “moderate” jihad terrorist groups opposed to the Damascus government. So why should it be out of bounds to give disparate treatment to members of the one religion (guess which!) that is linked to a basket of undesirable features such as sharia law, the caliphate, stoning adulteresses, killing apostates, and (in some areas) female genital mutilation? Nothing in the Constitution Mr. Khan has kindly offered to Donald Trump prevents such scrutiny.

As of this writing, the anti-Trump Two Minute Hate has lasted several days and shows no sign of abating. One senses the Philly scoundrel-patriot Democrats, Establishment Republicans, and their media lapdogs believe they have finally found the right harpoon to kill the Great White Whale and will keep hurling it with gusto. Whether it works or not remains to be seen.