In the Dead West, our heroes are no longer cowboys but those creepy weirdos who slink around the alleyways of red-light districts.  One such warrior for righteousness is described by the Associated Press as “Vladimir Luxuria, a former Communist lawmaker in the Italian parliament who has become a prominent transgender rights crusader and television personality.” Vlad has made recent headlines because he went to Sochi to wave his little rainbow flag and protest Russia’s laws “discriminating” against the “LGBT community.”

Vladimir, you may recall, is a boy’s name, but all of the pronouns in the media coverage of this story are feminine.  “Luxuria . . . told The Associated Press she was held for several hours Sunday before she was released. She said she was not charged.”

Yes, Mr. “Luxurious” is what in living memory we called a pervert—indeed, a professional one, as he, while retaining his boy parts, has made a career of parading around in women’s dress (actually, minidress and fishnets) on television and in the Italian Parliament. 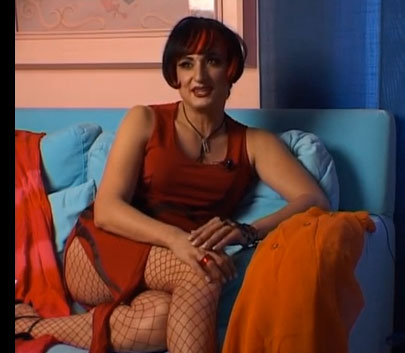 Born Wladimiro Guadagno and still legally male, “Vladi” was apprehended by “two men in plain clothes” for marching around Sochi’s Olympic Park with a sign that read “Gay is OK.”  This is in violation of Russia’s federal statute banning any propaganda viewable by minors that promotes “non-traditional sexual relationships”—a term that would describe “Luxuria’s” entire public persona.

Western liberal media have with one voice insisted that this law, which consolidates regional laws already on the books in places like Sochi, is a thin cover for the outright persecution of gays, and Bob Costas mentioned it in the opening broadcast of NBC’s Olympic Coverage. A-List celebs like Madonna and that pudgy guy who wore a prosthetic penis in The Wolf of Wall Street have joined the Human Rights Campaign in protesting this virtual invitation to kill LGBTs at will.  Star Trek’s Mr. Sulu expressed outrage at Russia’s “cynical and deplorable actions against the LGBT community,” which “have given license to hate groups within its borders to act with violence and impunity against a group, based solely on whom they were born to love.”

Given such coverage, one would’ve expected to see another Vladimir lining the Olympic Village with impaled malefactors.

Instead, we have the Tale of “Ms Luxuria,” as the UK Independent respectfully dubs him, followed by this tiny bit of perhaps relevant information: “Sochi organizing committee spokeswoman Alexandra Kosterina said: ‘We’ve talked to police and they have told us there is no record whatsoever to any detention or arrest.’”

Now of course we should prefer the word of an LGBT activist to that of the evil Russians, but something in the reporting made me wonder. On Sunday night, after his brutal nonviolent detainment, “Vlad Luxuria” was said to have been observed “enjoying” himself following a drag-queen performance at Sochi’s “main gay club.”  How can such a place even exist in the Russia “Vlad Luxuria” and the Dead West are protesting?