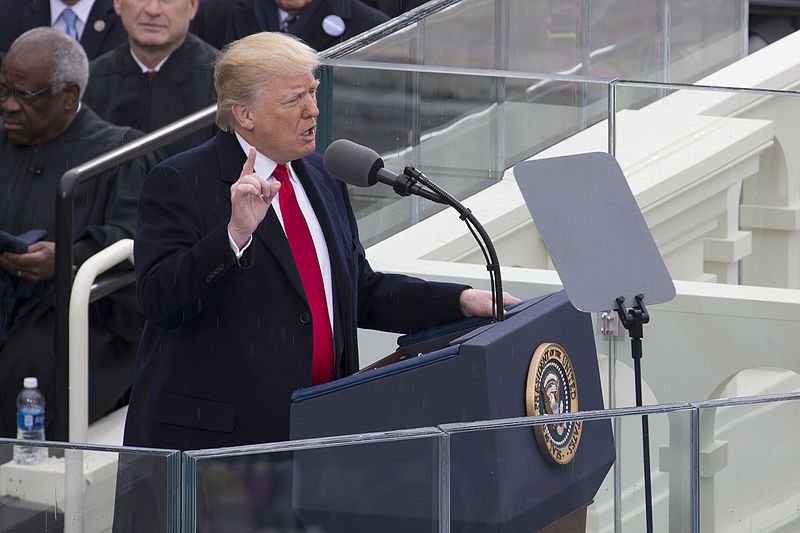 In his inaugural address President Trump made an important statement on foreign affairs which reflects his views on the nature of the international system and America’s role in it. His is a realist paradigm, explicitly based on interests rather than “values.” This is at odds with the bipartisan consensus which has guided the U.S. foreign policy for some decades now.

Friday’s address heralds Trump’s break with the legacy of Woodrow Wilson, which has created countless problems for America and the world over the past 99 years. Unlike his immediate predecessors’ inauguration speeches, it contained no reference to expanding freedom and ending tyranny in the world (Bush 2005), or supporting democracy abroad (Obama 2013). Trump specifically rejected the notion of transforming the world in America’s image.

Trump said that “every decision on trade, on taxes, on immigration, on foreign affairs” will be made to benefit Americans. “We will seek friendship and goodwill with the nations of the world, but we do so with the understanding that it is the right of all nations to put their own interests first. We do not seek to impose our way of life on anyone, but rather to let it shine as an example.”

This is a clear statement of the realist view of international relations. At its core is the notion that national interest is the moving force in an inherently competitive system. Nation-states are the principal actors in that system, they actively pursue self-interest in what is still a Hobbesian world, and America is not and should not be an exception to that principle. Trump gave us a summary of how the state system works with which Henry Kissinger or John Mearsheimer would agree. As a realist, he naturally rejects the doctrine of America as a proposition nation, a model to be thrust on the rest of the world.

There was one statement in Trump’s address, however, which sounded hubristic rather than realist: “We will reinforce old alliances and form new ones and unite the civilized world against radical Islamic terrorism, which we will eradicate from the face of the Earth.” The struggle against radical Islamic terrorism should be a cooperative endeavor, but the implication that “we will . . . unite the civilized world” implies some American-led grand coalition. Vis-à-vis Russia in particular this approach won’t work; that of an equal partnership will.

In addition, “eradicating” jihadism “from the face of the Earth” would be great, but it is not an attainable objective. Most of the Muslim world is in chaos or latent crisis, and new hotbeds of instability may emerge at any moment (e.g. the collapse of the House of Saud). The potential for the rise of jihadist movements will not diminish in the years ahead. Joint action with “the civilized world” to keep them in check is necessary, but it is too much to hope that they will be permanently destroyed.

Donald Trump is the first president since Richard Nixon to return the raison d’état to its rightful place as the guiding principle of foreign policymaking. He has made a clean break with the current establishment’s imperial pretensions and moral absolutism, which is a welcome development. It will make America safer and the world more peaceful.

Previous PostThe Screech of the PrivilegedNext PostTrump: America for the Americans!