After Lee: Charlottesville and Beyond

Home Web After Lee: Charlottesville and Beyond
Web
August 23, 2017June 15, 2022By Wayne Allensworth 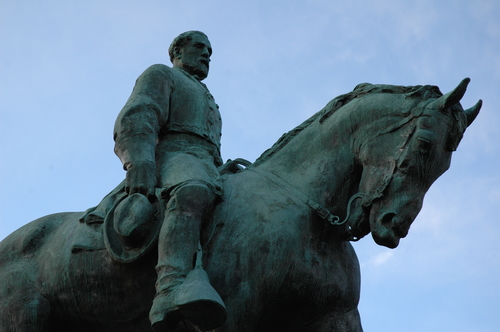 Was it for this
That on that April day we stacked our arms
Obedient to a soldier’s trust? To lie
Ground by the heels of little men,
Forever maimed, defeated, impugned?

—Donald Davidson, “Lee in the Mountains”

There are times when I feel as though I’ve awoken in a madhouse, a madhouse that cannot possibly be the country I was born into.

Following Donald Trump’s heroic news conference in New York the week of the Charlottesville riot, and his subsequent “tweet storm,” in which our president, in defending historical monuments, displayed more common sense and sanity than our media, political, academic and economic establishments are accustomed to, I could only conclude that to display sanity these days is an heroic act in itself. I walked away from the computer screen long enough to scan the bookcase in my son’s room and pulled from the shelf a volume I had treasured as a boy, a beautifully illustrated biography by Henry Steele Commager and Lynd Ward entitled America’s Robert E. Lee. I had often borrowed it from the library of my elementary school and had found a copy of it decades later in a used book store.

The book ends with Lee at Appomattox:

So ended the Army of Northern Virginia—Lee’s army . . . As he sat astride Traveller his men crowded around him, many with tears streaming down their cheeks, not cheering, but saluting the leader who had never failed them. Then he turned, and rode off into history.

Lee’s portrait hangs in my office. A boxed set of Douglas Southall Freeman’s monumental Pulitzer Prize winning, four volume biography, R.E. Lee stands atop my book case, a prize I happened upon on a trip long ago. Lee’s greatness was once acknowledged by Americans North and South. President Eisenhower described Lee as “one of the supremely gifted men produced by our Nation . . . Through all his many trials, he remained selfless almost to a fault and unfailing in his faith in God. Taken altogether, he was noble as a leader and as a man, and unsullied as I read the pages of our history.” Indeed, for decades, Lee has often been listed as one of the most important leaders in American history.

Lee fought his war for all the right reasons, as a war for independence, much like that fought by his father, “Light Horse Harry” Lee, a century earlier, and he fought with honor. His Army of Northern Virginia remains legendary in the history of American arms. In victory, he was magnanimous, in defeat, he called for reconciliation. The post war social compact upheld the honor of both sides. Lee and all who fought are an essential part of the American story.

And now the great man, who, unlike many others who have left their mark on history, was also a good man, along with practically all our monuments dedicated to heroes of an often tragic past are under assault by the vilest of Bolshevism’s bestial epigones. They hate the South because they hate America, for that is the point. They hate Lee because they hate honor and despise the Christian faith. Their fanaticism is a sign of the demonic.

As James Jatras has pointed out, the aim of the fanatics and their enablers is nothing short of achieving the “death of a nation,” replacing it with “a new, borderless, multiethnic, multilingual, multi-religious, multi-sexual, ahistorical, fake ‘America’ now aborning in violence and lawlessness”:

He who says A must say B. When one accepts demonization of part of our history and placing those who defend it beyond the pale of legitimate discourse, one should hardly be surprised when the arrogant fury of the victors is unleashed. That takes two forms: the nihilist street thugs of “Antifa” and “Black Lives Matter,” and the authorities (both governmental and media, a/k/a the Swamp) who confer on them immunity for violent, criminal behavior. The former are the shock troops of the latter.

No rational arguments can penetrate the ideologically thickened skulls of fanatics. Others have already noted the hypocrisy, the Orwellian distortions of reality (not only about what happened at Charlottesville, but about what President Trump said concerning the violence there), and the mendacity and hatefulness of those who would destroy monuments in Taliban-like fashion, erasing our country along with our freedoms and civilization itself. George Neumayr has commented in The American Spectator that he wonders “what entitles this generation to speak so confidently about past evils given its inability to recognize present ones,” including being “awash in the blood of millions of aborted children.” That’s something I’ve often wondered myself. How can these people sit in judgement on heroes of the past as they tolerate even a trade in body parts from aborted babies? The blogger “Roman Dmowski” has made a similar point:

We live in a country with over a million abortions a year and gay marriage. Is that somehow better than the generation that fought World War II and also didn’t want school bussing? I don’t think so.

Naturally, “conservatives” and members of the stupid party are joining the lynch mob instead of stopping it. By the way, what exactly do “conservatives” conserve anymore? It is difficult to say, except maybe their seats on Meet the Press and Morning Joe. Turn on the TV and you are likely to hear some “conservative” rebuking Trump for his ban on transgendered troops, extolling the glories of gay marriage, and casting Robert E. Lee as a traitorous dirtbag. Rich Lowry wants to see the Confederate monuments “mothballed.”

. . . The press had grown accustomed to Republican presidents who suffered under what might be called a conservative inferiority complex. Trump, fortunately, isn’t touched by it and is willing to call the self-appointed ruling class on its propaganda and lies. As phony Republicans and conservatives chase after the mob headed for Lee’s statue, there stands Trump like a stonewall.

Phony they are, while Trump has shown more courage and stood up for normal Americans more than “stupid party” functionaries ever have.

Post-modern people lack the tragic view. They fail to grasp that there are many problems in this world that cannot be fixed, that utopia is a satanic temptation, and that all human societies are flawed. Slavery was not unique to America or to whites or to the South, blacks sold and owned slaves, and the ever present tensions between races and the “gaps” between them cannot be wholly avoided, or closed by acts of legislation or political fanaticism.

We have to keep our heads while all about us are losing theirs. The establishment and their maniacal minions are overstepping. Once more from Mr. Neumayr:

These dolts still don’t get it. Trump won the presidency not in spite of his defiance of conventional wisdom but because of it. And he will win re-election for the same reason. If anything, the hidden Trump vote will increase. Trump’s strength is that he refuses to go wobbly in the face of fashionable lies—a trait no Republican president since Reagan has displayed.

This fight isn’t over yet. We can win it.


Corresponding Editor Wayne Allensworth is the author of The Russian Question: Nationalism, Modernization, and Post-Communist Russia and of a novel, Field of Blood (forthcoming from Endeavour Press).

Previous PostTrump on Afghanistan: More of the SameNext PostExploring the Shadows of America’s Security State