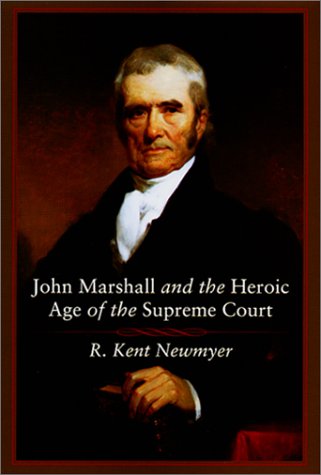 From the June 2002 issue of Chronicles.

There are probably more judicial biographies of Supreme Court Chief Justice John Marshall than of all the rest of the Supreme Court justices combined, so why another one?  R. Kent Newmyer, historian and law professor at the University of Connecticut School of Law, undertook to write a work that would not mirror the standard hagiographical account.  Oliver Wendell Holmes, Jr., once said, “If American law were to be represented by a single figure, skeptic and worshipper alike would agree . . . that the figure could be one alone, and that one, John Marshall.”  Holmes is universally regarded as the only authentic sage ever to sit on the high-court bench, so his opinion commands great authority.  Indeed, Marshall is generally given credit for the American institution of judicial review, the practice whereby the Court tests laws to see if they are in accordance with the Constitution and nullifies them if they are not.  In the great cases of McCulloch v. Maryland (1819) and Gibbons v. Ogden (1824), Marshall laid the groundwork for the expansive interpretation of the Commerce Clause, which has allowed the federal government to intrude into virtually every aspect of American life.  In Dartmouth College v. Woodward (1819), Marshall prevented the state of New Hampshire from altering the charter of Dartmouth College, and, in the process, immunized existing corporations from having their articles of incorporation abridged by the states.

Marshall is currently the hero of those who favor an intrusive federal judiciary, and McCulloch, Gibbons, and Dartmouth College are usually presented as bold judicial innovations that justify today’s brand of judicial activism.  But Newmyer, arguably our best judicial biographer (his book on Marshall’s colleague Justice Joseph Story might be the finest book on an American judge), offers a different appraisal in this volume in LSU Press’s Southern Biography Series, where the author presents Marshall not as the nationalist aggrandizer that most biographers have lionized but as a conservative Virginian.  This is bold of him, since the quintessential Virginian, Marshall’s cousin Thomas Jefferson, loathed the Chief Justice (his dislike was enthusiastically reciprocated), and Jefferson regarded Marshall as one of the chief “sappers and miners” seeking to obliterate the power of the states and impose a national aristocracy or monarchy on the good people of this country.

Newmyer’s Marshall is presented warts and all, and the resulting figure is both lesser and greater than the currently prevailing legal caricature.  Newmyer shows us that some of Marshall’s opinions turned on his own financial needs as a land speculator, that Marshall was a careful manipulator of cases and litigants to achieve maximum political effect, and that he avoided ruling on issues that might result in the Court’s pronouncements being ignored by the executive branch—while stoutly maintaining that Supreme Court jurisprudence should not be confused with politics.  But New-myer also limns a subtle Burkean who eschewed abstract theories and was committed to preserving existing American institutions, celebrating the rule of law, and building a viable national market that could sustain American independence and eventually result in American greatness.  This Marshall, though believing in the need for national uniformity in property and contract doctrines, is not the consolidator his cousin Thomas labeled him.  In most matters, Newmyer argues, Marshall believed in the primacy of state law and local governments, while (he even confesses) his subject would have been appalled by the New Deal and the riotous expansion of the federal government that followed.

For those who had all but given up hope that the jurisprudential philosophy of the Old Republic might ever be restored, Newmyer’s look at Justice Marshall at least offers the possibility that current lawyers and law students can learn more about what that philosophy actually was and, perhaps, even be persuaded of its merits.  Newmyer, by presenting Marshall as a passionate but very human judge, reminds us of the limits of trusting judges as legislators; and, by portraying Marshall as the conservative Virginian that he was, Newmyer underscores the Constitution’s original vesting of primary legal authority in the states.  In short, Newmyer has written a book to be placed on the required reading list for jurisprudential paleoconservatives, who should be pleased to discover in Marshall a kindred spirit.

Fashions come and go in legal education and legal academic scholarly research, and the jurisprudential premises of one generation’s law professors generally are played out in the judicial opinions of the next.  Our current era of freewheeling judicial legislation is relatively young.  (It began with the New Deal, peaked in 1973 with Roe v. Wade, and, in the Rehnquist Court, shows signs of weakening.)  So perhaps the appearance of a new perspective on Marshall is an encouraging epiphenomenon signaling a change in academic fashion.

In American law schools, the dominant jurisprudential views are still those of the Ted Kennedy wing of the Democratic Party, but the emergence of the Federalist Society—concerned with reducing judicial legislation and returning political power to the states—indicates some healthy ferment.  Newmyer and his work (his biography of Justice Story also presents that judicial titan as a conservative Burkean) are part of this ferment.  Newmyer himself is something of a reluctant participant, to the point of protesting against the possibility that he might be perceived as a conservative.  Worse, he characterizes Marshall’s beliefs in the primacy of property and in natural law as “archaic.”  Suppose, however, that Marshall’s ideas are not simply artifacts of his time but the expression of timeless truths.  Then perhaps reading their lucid exposition in this elegant volume and learning that the Marshall beloved by the liberals is an historical fabrication might encourage those who seek to return these central premises of the rule of law to the place they once enjoyed in our polity.

Even Newmyer cannot help but slip into the hagiographic mode.  Though he finds Marshall to have been occasionally self-seeking, he presents the interests involved as coinciding with those of the nation.  Further, whenever Marshall pulls his jurisprudential punches—for example, to avoid direct confrontations with the hostile presidents Jefferson or Jackson—Newmyer praises the discretion of the Chief Justice in preserving the Court to fight another day.  In the hands of another writer, Marshall’s prudence might have been labeled cowardice.  For instance, I agree with those who argue that Marshall pusillanimously failed to defend the prerogatives of the Court when his colleague Samuel Chase was being impeached by the Jeffersonians in 1805.  At that time (though Newmyer doesn’t tell us) Marshall, contrary to his holding in Marbury v. Madison (1803), was prepared to lodge the power of judicial review in Congress, not the courts.

Moreover, the piece of federal legislation Marshall found unconstitutional in Marbury was the law giving the Court jurisdiction to grant relief to a litigant who had been wronged by the Jeffersonians’ refusal to deliver a commission for federal office.  Thus, when Marshall exercised judicial review in Marbury and ruled, on what have come to be seen as questionable grounds, that he had no jurisdiction, he deftly avoided a confrontation with the President.  That was the first and last time Marshall’s Court ever voided a federal statute.  Marshall picked his battles carefully and appears only to have moved against state legislation in Dartmouth College, McCulloch, and Gibbons when he knew that strong interests supported his decisions and, therefore, that they would be carried out.

Even so, I came away from this biography touched by Marshall’s sagacity, his humility, and—mirabile dictu—his piety.  This is not the Marshall that William Brennan would have recognized, but it may be as close as we are likely to get to the real one.  The paleoconservative legal proposition, borrowed from the Federalists, is that there can be no order without law, no law without morality, and no morality without religion—to which John Marshall, as the leader of the Virginia Federalists, would have assented.  If Newmyer’s book, like other Marshall biographies, veers toward hagiography, then hagiography, after all, is the literary form appropriate to writing about a saint.

Previous PostMoment of Unity in a Disintegrating WorldNext PostThe Journalist and the Fixer: Who Makes the Story Possible?