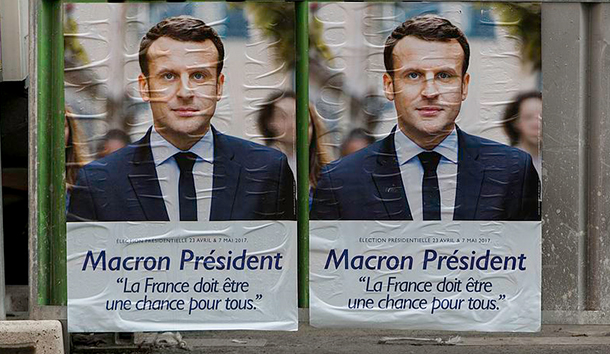 Emmanuel Macron’s predictable victory in the second round of the French presidential election on May 7 is bad news for France and detrimental to the prospects of Europe’s cultural and demographic survival. For details see my June column in Chronicles: he is a paradigmatic pastiche of Europe’s postmodern transnational elite, a former international banker and fanatical Euro-integralist, an Islamophillic open-borders globalist willfully blind to the civilizational threat we all face. In brief, “Macron belongs to the elite class: rootless, arrogant, cynically manipulative, and irreversibly jihad-friendly . . . He embodies France’s loss of the will to define and defend one’s native culture, and the pan-European loss of the desire to procreate.”

In the aftermath of Britain’s Brexit vote last June and Donald Trump’s victory in November, an equivalent rebellion of the masses against the elite class had been predicted in continental Europe. As the elections in Austria, the Netherlands and France have shown, this did not happen. The ruling establishment is too strong and too deeply entrenched on both sides of the Atlantic to allow for any departure from the elite consensus on an important issue. That much is clear from Trump’s serial U-turns—on détente with Russia, on regime change in Syria, on the future of NATO and the usefulness of the European Union, on NAFTA and the grand strategy of global dominance. It is clear that the critical mass of Europeans who care about the future of their progeny and who put the issues of cultural and ethnic identity at the top of their political agenda does not exist, rapid Eurabization of the Old Continent notwithstanding. It is also possible that Trump’s palpable failure to resist the Deep State has demoralized some on the Right, in France in particular, who had been deeply skeptical of the integrity of the political process to start with.

Macron’s victory nevertheless was not as convincing as the media would have us believe. In spite of the sustained anti-Le Pen media campaign, he was supported by less than one-half of the electorate. One-third of the French did not vote in the second round, a record 11% of ballots were spoiled, and 34 percent of votes went to the NF leader. The unholy alliance of corporatist right and authoritarian elitist left has prevailed yet again, but France remains a deeply divided country. The two main political parties, the Republicans and the Socialists, are in disarray: their candidates were eliminated in the first round. On the other hand, the National Front is making steady gains as it has done for years. Capturing a third of the vote is a success considering the party’s 24/7 media demonization. It could win in five years’ time with the right strategy of forging new alliances, wooing Gaullist traditionalists, and (especially) making itself attractive to the younger generation of French voters, who already provide disproportionately large base of support for Marine Le Pen (a stunning 40 percent of French youths aged 18 to 24 voted for her).

The problem is that, with Macron at the helm, France will be in far worse shape in 2022 than it is today. He will not reduce immigration. He will not impose any effective security controls on France’s burgeoning Muslim community. He believes that the collective march toward an ever-tighter European Union must go on unhindered. He is committed to a federal superstate, free of the hindrance of national parliaments and wily electorates. In the Brussels-centered superstate he sees the fulfillment of his ideological vision and, more importantly, the protection of the power and privileges of his class in perpetuity.

Macron’s election will contribute to the ongoing process whereby the old European “core” is rapidly descending into a cultural and spiritual wasteland in which mind-numbing political correctitude (including de facto Jihadophilia) is being imposed by hook or crook. He has declared, Obama-like, that the Islamic State is not at all “Islamic”: “The problem is not Islam, but certain behaviors that are said to be religious and then imposed on persons who practice that religion.” Immediately after the horrendous terrorist attacks in Paris on November 13, 2015, he said that French society must assume a “share of responsibility” for creating the “soil in which jihadism thrives.” He believes that the French society “must change and be more open,” presumably to further unassimilable multitudes pouring into the country from the Maghreb.

Macron is not only a civilizational and racial self-hater. He also embodies the historical amnesia and aesthetic relativism which are promoted all over Europe to the detriment of artistic creativity and intellectual excellence. He is utterly and flamboyantly deracinated: on February 22, visiting the French expatriates in London, Macron said: “French culture does not exist, there is a culture in France and it is diverse.” Which is to say that, in France, French culture and French traditions have no prominence or importance over imported migrant cultures. The same day, in London, he said, “French art? I never met it!”

Thanks to Macron and people like him there is no French writer worth reading today, no Dutch painter worth sponsoring, no German composer worth hearing. The process is so far advanced in one of the key countries that used to define “the West”/“Europe” a sexually-ambiguous promoter of cultural and ethnic self-annihilation is elected head of state. He embodies the multiculturalist schizophrenia which will lead to death. Europe’s Macrons and Washington’s neolib-neocons share the same distaste for traditional, naturally evolving societies and cultures.

Previous PostNixon and Trump, Then and NowNext PostSing Me Back Home