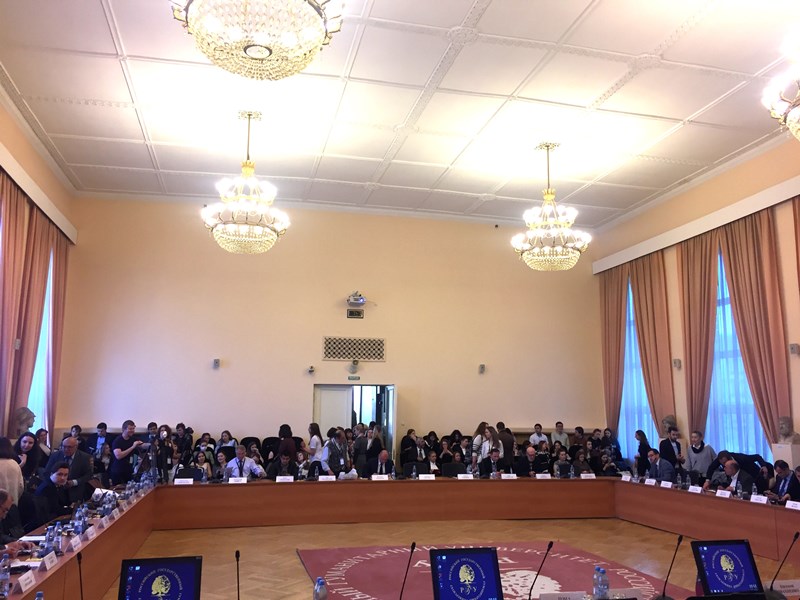 Here I am in Russia, for the third time in two months. This means the FBI should start an investigation, if it has not done so already. This time I was invited to a conference (“Exporting Democracy”) at the Russian State University for the Humanities on Thursday. As is often the case with Russian conferences, there were too many participants (24 from 12 countries) with too little allotted time (10-12 minutes each). Some presentations were highly technical—e.g. on the use of Facebook in Ukraine in the context of the Donbas conflict, or on the impact of various social media on politics in Central Asia—but several papers were quite interesting; and all were mercifully unencumbered by the dead hand of postmodernism and polit-correctitude which make academic conferences in the West mostly unendurable. Here’s a summary based on my notes.

Alexei Mukhin, head of Moscow’s Center for Political Information, said that “democracy” has evolved into an export product that some Western countries try to impose on those which they want to draw into their geopolitical orbit. “Over the years this product has depreciated and even gone bad,” Mukhin added, “and by now many would-be recipients do not trust the purveyors.” By contrast, the activities of the Russian Defence Ministry in Syria are tantamount to the “export of security and sovereignty.” Russia is the only geopolitical player in the world willing to offer such services, because it is essentially a conservative power seeking to reestablish order based on sovereign nationhood; whereas the United States has evolved into a revolutionary power opposed to vertical hierarchy and naturally evolving institutions.

Journalist Yevgeny Primakov (grandson of the late Russian prime minister of the same name) focused on the technique of regime change used during the “Arab Spring” in Egypt. He said that initially the role of various NGOs was legitimate and even useful: protecting the rights of the Copts and women, sponsoring projects to improve the urban environment or education, etc. At the same time, however, the U.S. government was sponsoring and financing hundreds of quasi-NGOs, many of them clandestine and unregistered, which were political in their objectives and Islamic in their outlook. As a result, Primakov said alluding to the Muslim Brotherhood, “various ultra-conservative extremist organizations turned out to be the most prepared, motivated and organized to claim control of the street, and ultimately power . . . The export of democracy has strengthened extremist trends.”

My English friend John Laughland noted that it is easy to see why many analysts claim that Western-sponsored color revolutions are based on the promotion of chaos. In Ukraine, the violent overthrow of a president who had tried to balance between East and West provoked a chaotic situation. The West applauded when the “Arab spring” started in Tunisia in late 2010, yet that country is now the world’s foremost exporter of terrorists. In Libya and Syria, the West’s involvement is clear and the chaos was designed for geopolitical purposes: in Syria, to push back the Shia crescent (Lebanon-Syria-Iran), to prevent Iranian pipelines from crossing Syria, to aggravate the intra-Muslim Sunni-Shiite conflict, and to destroy Moscow’s key Middle East ally. Laughland recalled that in 2004, in Iran, a government minister told him that “the Americans are always creating new crises, in order to distract attention from the ones they have just created.”

Laughland insists that the Western opposition to Russia reflects the opposition of chaos to order. Western politics, on both sides of the Atlantic, are in his opinion deeply wedded to the politics and indeed to the metaphysics of disorder: nothing is what it is but is instead another thing, everything is in a state of permanent flux:

National borders are ephemeral creations which come and go like flotsam and jetsam on the tide of history. Nations themselves are pure constructs, condemned to grow old and die, or to transform themselves into post-national entities. Sexual orientation is fluid too: and even gender is now said to be a matter of choice and not biological fact. There is an increasingly open campaign in favour of racial mixity, as politicians and other social engineers seek to break irredeemably the ethnic base of the nation by encouraging mass migration into Europe. Transhumanism is now on the agenda – the mutation of human nature itself . . .

Laughland sees this Western love of the amorphous as the key to its Islamophilia: Islam is trans-national, and aims to create a universal political entity which bears disturbing resemblance to the one-world dreams of many liberals. But all this, Laughland stresses, is nothing new. Two years before the execution of the king and the terror, Edmund Burke understood that a destructive break with the past—and with the partly mysterious but nonetheless stable and intelligible contract of tradition between those who are living, those who have died and those who are yet to be born—would turn France into a casino. Burke railed against the philosophers determined to make society confirm to their abstract ideals and who preferred their “speculations” to reality.  He wrote, “The truly melancholy part of this policy of systematically making a nation of gamesters is this; that tho’ all are forced to play, few can understand the game.” As Laughland concludes, “Burke understood, in other words, the dual sense of disarray, economic and national, which the revolution would sow among ordinary people through its politics of chaos. He showed how the revolutionary ideology would profit the greedy few at the expense of the many, and how the revolution stole their real rights in the name of false rights and their real money in the name of false money. His words, two hundred years later, are unfortunately still relevant today.”

Just how relevant those words are to today’s France was apparent from Xavier Moreau’s analysis of the “color revolution” which brought Emmanuel Macron to power. The first task of the French deep state was to discredit and demolish François Fillon, the former front-runner, who was deemed far greater threat than Marine Le Pen because he was a conservative practicing Catholic (father of five children), an open proponent of détente with Russia—and electable. He was duly subjected to the usual regime-change media treatment. Macron was universally acclaimed by the media and the establishment for his promise of hope and change, a carbon copy of Obama’s 2008 campaign. At the same time there was no real discussion of issues: meaningful debate was replaced by touchy-feely generalities, which reflects the general decline of France’s electorate. A generation ago, it would have been impossible for a man who claims that “the French culture does not exist” to be elected. Moreau concluded that there is no substantial difference between the techniques of mass manipulation used by democracy exporters abroad and those applied to their own public in order to achieve preordained outcomes by controlling and managing the ostensibly democratic process.

My own contribution focused on the question whether Donald Trump can and will resist the straitjacket which the Russophobic, NATO-for-ever “foreign policy community” inside the Washington Beltway has been hewing for him ever since last November 8. Whereas my response to this question in St. Petersburg in March and here in Moscow in April was decidedly gloomy, this time I expressed some modest hope that a historic opportunity to effect a pan-European entente that embraces the whole of the Northern Hemisphere is still not irretrievably lost. Trump appears to have capitulated to the forces of the Deep State (or, perhaps more accurately, just “the State”) but his retreat may have been temporary and tactical in nature, in view of the breathless Russophobic hysteria currently gripping Washington. Incidentally, several Russian sources have told me that Foreign Minister Lavrov’s visit to the White House last week provided some grounds for optimism that all is not lost. It is certain that the Russians would still welcome a realist, transactional approach to bilateral relations, even though they are puzzled and somewhat horrified by the ongoing freak show across the Pond. 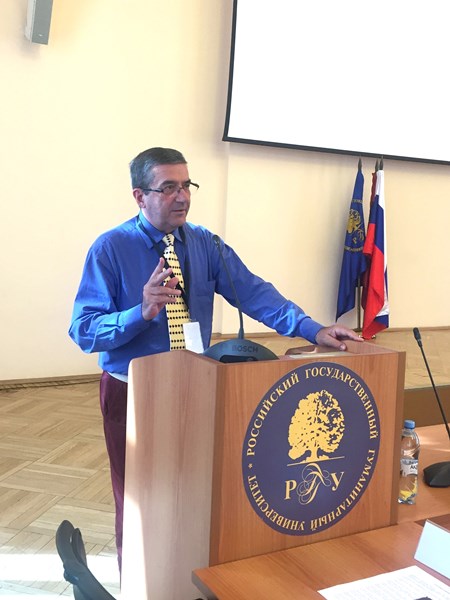