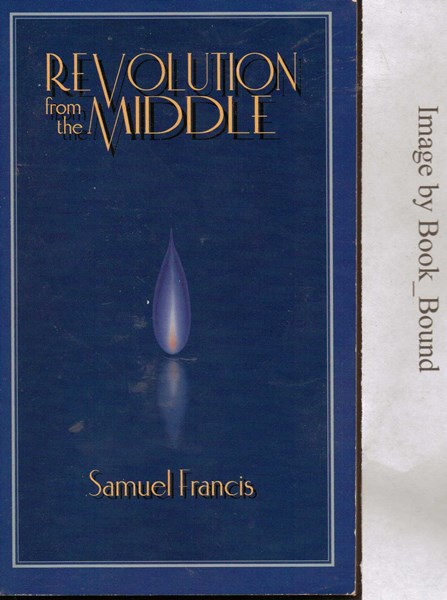 Samuel Francis’s newest book, composed of 30 essays originally published in Chronicles between 1989 and 1996, is much more than a collection of articles about matters of passing concern. Rather it attests to Francis’s singular efforts in constructing a strategy by which Americans might recapture their nation from the decadent establishment now in power. He does this by challenging that world of comfortable delusion and naïveté that has come to characterize conservative thought, and by calling our attention to the fact that, if we are to prevail, we must comprehend what American civilization was and is, and to consider what we wish it to become. In other words, to formulate a successful strategy we must begin to think sociologically.

We do well to ignore the petty ideological scribblers who dominate sociology today and to remember instead the true sociological luminaries of the last two centuries. In the realm of modern political theory Vilfredo Pareto, Roberto Michels, and Gaetano Mosea must be ranked among the great masters. Yet their books are neither easy to find nor to read. Happily, the central themes encompassed in the works of these authors were epitomized and synthesized over 50 years ago by James Burnham in The Machiavellians, a genuine classic that even today remains in print.

A leitmotiv running through the works of these men is the notion that all human societies have been governed by elites. Whatever the system, from tribal chiefdoms to complex federal republics, governance will be carried out by an elite of one sort or another: a function of the truth that all people are not equally clever or courageous. Marxists, Pareto takes pains to point out, may bluster about the rights of the downtrodden masses, but the practical effect of their theories, insofar as the relationship between rulers and the ruled is concerned, is merely to substitute one hierarchical system with another. To note that governance is always under the direction of an elite and that all societies from the greatest to the most humble are organized along hierarchical lines, is obviously not to say that all elites execute their roles with equal deftness. History testifies that some elites maintained power for centuries and, in the process, brought happiness and prosperity to the peoples and nations commended to their care. Others, like the Bolsheviks, brought only bottomless desolation to their hapless subjects.

Our own current ruling elite, in power for most of this century, is of a definitely leftist temper, sharing certain of its ideological assumptions and many of its more grotesque hallucinations with its Bolshevik cousins. While it has, by and large, eschewed the use of naked terror (at least until recently), it is surely no exaggeration to say that it has spawned considerable misery and catastrophe, both at home and abroad. As Burnham notes, “The programs which [the members of the governing elite] profess, as well as those upon which they act, are devoid of reality in their failure to recognize the general pattern of our age. They are content not simply with myths, but with remnants of outworn myths. Proceeding in this manner, with the material resources devised by physical science at their disposal, they have brought civilization to the most shattering crisis of recorded history.” Indeed. So why are they still exercising power?

As a student of the work of Mosca, Michels, Pareto, and Burnham, Samuel Francis knows the source of modern liberalism’s success. Liberals understand, for example—especially after some painful lessons in this century—that to maintain control they must possess certain crucial centers of power, and so they have striven relentlessly to gain dominion not only over government but over the cultural organs of our society: churches, educational institutions, the arts, and the mass media. The necessity to control these cultural instrumentalities, though possibly instinctive on the part of the American establishment, was actually set down in a hypothetical framework by another brilliant theorist with keen sociological insights, the Italian Marxist Antonio Gramsci, with whose writings Francis is also thoroughly familiar.

Christianity, Gramsci deduced, having saturated the civilized world for 2,000 years, remained the dominant philosophical and moral system in Europe and North America, at least through the early decades of this century. So thoroughly integrated into the daily lives, and even the patterns of thought, of nearly everyone—including non-Christians living in these societies—had the Christian system become that it formed an almost impenetrable barrier to the new, revolutionary civilization that the radical left wished to create. Attempts to batter down that barrier generated highly menacing counterrevolutionary forces and were therefore unproductive. For this reason, Gramsci saw, it would be more effective and less risky to undermine the enemy from within; to achieve, through “cultural hegemony,” the transformation of society’s collective mind from its Christian perspective into one more congenial to Marxism. That precisely is what has been going on in this country for seven decades and, in accelerated form, in the last three. Through his reliance on an understanding of solid historical and sociological reality, rather than on silly mottoes or obdurate ideology, Gramsci succeeded by his influence in casting an ever-advancing shadow over our age.

Our own country—with its distinct people, its culture and traditions derived from Europe, and its unique way of apprehending the world—is governed by a ruling elite which openly seeks its obliteration. They have learned how to manipulate their power to achieve their ultimate objective. Their only opposition has been a congeries of well-meaning but politically inept and wholly unrealistic rightist groups, politely known as “the conservative movement.”

Many of these groups embrace aspects of rightist, conservative, and traditionalist philosophies that today are politically untenable, ranging from the immediate abolition of Social Security and Medicare to proposals for armed rebellion against the federal government. Others are “one-issue” organizations apparently convinced that the salvation of the country is dependent on a constitutional amendment allowing prayer in schools, or outlawing abortion, repealing the income tax, and abolishing the Federal Reserve. Still others are publishing businesses or chat clubs. For the most part, their dearth of insight relegates these groups permanently to the hinterlands of political life. However, drawing on the experience of the Wallace campaigns of the late 60’s and early 70’s, and enlightened by his study of the great political sociologists, Samuel Francis is able to perceive an approaching political “window of opportunity,” which he calls the “Middle American Revolution.”

The leaders of the Democratic and Republican parties have transformed themselves, he writes, into unabashed toadies of aggressive Third World immigrants, radical feminists, militant homosexuals, angry blacks, vacuous media celebrities, ruthlessly acquisitive parvenus, and transnational corporations. Meanwhile, Middle Americans are no longer represented by the two major parties, their role having been limited to paying for the socially deleterious programs of the “therapeutic managerial welfare state” and to sacrificing their sons in ever more bizarre foreign ventures. Not only are their interests treated with contempt by the major parties, but Middle Americans are routinely vilified by the very institutions they are forced to support. As Francis perceives, Middle Americans are hectored endlessly and advised that, “your heritage, your literature, your art, your holidays, your religion, your music, your beliefs, your country, and your very skin color are garbage and mere tricks by which you and your class and your race have tyrannized mankind.” Let Middle Americans raise their voices in protest and an avalanche of idiotic yet intimidating calumnies and accusations roll down upon their heads: racist, fascist, sexist, homophobic, and so forth.

Yet Middle Americans still constitute a significant majority in this country. Their lack of political influence is partly the result of their failure to grasp the life-or-death nature of the “culture war” now under way, of their failure to recognize that the establishment seeks first to pauperize them and finally, during the next few decades, to eradicate them along with their nation, their culture, and their historical memories. It also comes from the establishment’s control over a large segment of organized “conservatism.” This includes well-financed foundations and think tanks which have become almost entirely enclaves of Big Government conservatives, of the sort that claims Abraham Lincoln, Franklin Roosevelt, John F. Kennedy, and “Dr.” King as among their greatest heroes. The very political organizations which should be the agencies through which Middle America protects its interests and resists annihilation have been kidnapped and neutralized. Conservatism has thus become, as Francis asserts, a “hammer without ahead.”

Francis contends that if Middle Americans are to master their difficulties, if they are to preserve and restore the nation, culture, way of life, traditions, and polity created by their ancestors, they must be made conscious of the power they possess and be organized effectively, not only in the political sphere but in the cultural one. They must be prepared to articulate in convincing fashion their vision of American culture. That would mean a “long march” through the institutions that are the primary sources of the strength and power of the current ruling elite. In short, the hammer must acquire a head.

In “Culture and Power: Winning the Culture War,” Francis lays out, in elegantly practical terms, a three-point strategy by which this might be accomplished. All that we require, he states, is “the strength and the will and the common purpose to take back our country and our culture.” Samuel Francis is a political and sociological realist who points the way, in sober and sensible words, for a true renaissance of American civilization.

This article first appeared in the September 1997 issue of Chronicles.