The Declaration Now—and Then

From the June 2016 issue of Chronicles.

In 1996, Barry Alan Shain published his Myth of American Individualism: The Protestant Origins of American Political Thought.  It was a book that should have shaken professional conservatism to its foundations.  At the time Patrick J. Buchanan was a standard-bearer for an America bound by a common cultural and religious tradition and was being resisted by a conservative “movement” that preferred a big-government conservatism based on abstractions and embodied in a centralized bureaucracy.  Shain, a professor of history at Colgate University and a child of secular Los Angeles, argued that the generations leading up to and including the founding were not lovers of an abstract liberty or an untrammeled individualism.  The sentiments and mores of the colonists were based not in Locke or some post-Renaissance “republicanism,” but in small-town Calvinist Protestantism and a strong sense of the heritage of English liberty.  This tradition undergirded the founding generations and continued long after the War of Independence.

The language of our founding documents, Shain argues, “does not describe an individualistic disposition.  Rather, it reflects a Protestant communal world of ideas in which only a narrow range of behavior could be described as liberty rather than license.”  To be sure, Americans were influenced by different schools of thought, including classical republicanism and the conviction that the “science of politics . . . has received great improvement” (Federalist 9), owing to the work of theorists like Hobbes and Locke and, above all others, Montesquieu.  This latter influence tended to stress individual rights.  However, the most important formative influence on the early republic remained “the reformed-Protestant character of their political thought, with particular emphasis placed on the strong sense of personal and political limits derived from the Christian dogma of original sin.”  One cannot, in other words, understand what the colonists were talking about when they discussed liberty or political order without understanding that they assumed the sinfulness of man, the human temptation to license and evil, and the corresponding need for God’s grace.  In this context, “rights” are more circumscribed and focused on preserving and furthering a truly common good, and liberty must be preserved so man may discover what is right and act upon it, not simply so that he may do whatever he wishes.

The idea that the colonies embodied a deeply Christian culture saturated in Reformed theology does not sit well with our contemporary understanding of the revolutionary generation.  We tend to think of those 18th-century colonial leaders as protoliberals pursuing happiness apart from faith or custom.  But Shain’s work went unremarked by most of the conservative movement, even though it complemented the work of conservative thinkers such as Russell Kirk.  Shain’s work struck at certain conservative tropes, such as the conviction that the American political order expressed in the Declaration and the Constitution was some sort of content-free zone “of natural rights.”  Some modern conservatives, much as some liberals do, disdained colonial history as the story of small, Reformed Protestant communities.  Morals and a common cultural understanding are all well and good, but not connected in any substantive way with the language of our founding documents.  Willmoore Kendall, for example, famously criticized Kirk for arguing that our constitutional tradition was not really new.  These conservatives rather found the entire American experiment a philosophic enterprise centered in the Declaration, which they considered (in the words of Harry Jaffa) “the best of all guides to educating the guardians of republican freedom.”

The Declaration is of course important, but perhaps not so important as some of its partisans believe.  It was the result of years-long jostling among the colonies to agree on their desired relationship with imperial Britain.  In The Declaration of Independence in Historical Context, Shain continues his assault on reigning pieties regarding both the Declaration and American political culture generally.  The book is a sober, scholarly collection of just about all of the important writings on the subject.  Shain selected his material from the three Continental Congresses that met in the period 1764-66, and again in 1774-77.  Exhaustively edited and attractively presented, this book places the Declaration in a wider American and British imperial context and ranges from statements by the king through various resolutions of the colonies (and later, the states) to generous selections of letters and other memoranda.  For this reason alone, the book will stand as a lasting scholarly resource.

Important interpretive questions remain, however, and Shain restates here his communalist Protestant position.  The arguments of writers seeking to establish a primary role for Lockean and republican influences on the founding generations and the Declaration itself suffer from several flaws.  The first is that these theories are “idealist in suggesting that well-developed high-level abstract political theories . . . served as the principal guides in directing North American colonists to resist British parliamentary imperial governance . . . ”  Further, they focus on the “we hold these truths” paragraph of the Declaration as “a stand-alone piece of political philosophy that uniquely gives full expression of the American mind circa 1776 while additionally providing that nation’s founding and perpetual creed.”  Pulling back from a minute analysis of the text of the Declaration itself or of the mind of Jefferson, its primary drafter, permits us to look at hundreds of resolutions, statements, and other documents in the years leading up to 1776, many of which involved the very same men who would later vote to approve the edited draft of the Declaration.  They display very little support for the contemporary view of the Declaration as the formative influence on the tradition of ordered liberty among the colonists.

This crucial period offers abundant evidence that leading colonists were obsessed with a particular point of British imperial policy: whether Parliament had the right to tax them directly, or whether the colonies stood in a direct relationship to the king as overseas possessions rather than as part of the British realm proper.  Kirk, quoting the historian Daniel Boorstin, claimed that “the major issue of the American Revolution was the true constitution of the British Empire, which is a pretty technical legal problem.”  The Declaration is not only about legality, of course—though in form much of it is a legal brief, and Jefferson’s prolix first draft was severely cut back—but to ignore that it is at least in part about legality is to do the Declaration, and by extension the circumstances leading to its promulgation, a disservice.

Shain has divided his book into “Acts,” moving from the Stamp Act crisis of 1764-66 through the Coercive Acts in 1774 and the early fighting that produced the Declaration to the creation of the “New Nation” in 1776 and 1777.  He has prefaced each section with a rich critical essay, outlining the issues at stake and the shifting positions of both the colonists and the British government on the road to independence.  Shain portrays the story dramatically, especially in the period from October 1775 (when George III declared that the colonies were seeking to establish an “independent empire”) through the early months of 1776, when the failure of the Canadian campaign became increasingly obvious and the last of those colonists still committed to king and empire began to feel independence was the only remaining option.  As Shain shows, the stirring language of the Declaration in its assertion of individual rights is a departure from previous actions by the Continental Congresses.  For the Declaration provides “a rich philosophical description of republican political theory, one at variance with the constitutional-monarchical principles and political institutions that three earlier Congresses had defended . . . ”  Thus, he concludes that the “We hold these truths” paragraph “turned to a heretofore more or less peripheral republicanism and natural rights theorizing in making its case for the colonies” to be recognized as independent states.  And it is perhaps noteworthy that the changes made to Jefferson’s draft largely let that paragraph stand and focused instead on the legal grievances against the king—supporting the view that its implications were not generally appreciated.  Shain notes the irony of a congressional rejection of claims made in 1776-77 by residents of what was then part of New York to govern themselves rather than to be governed by the state of New York, even as they were relying on the language of the Declaration.  And he includes in his book the congressional response of June 1777 to a protest by Vermonters that they could take “no countenance or justification” from the Declaration for their own acts.  Self-government, it seems, only went so far.

Barry Shain does not go too far in speculating how Jefferson’s stirring phrases came to be included in the final text, though he suggests that their inclusion reflects a long-standing political debate among the colonies, rather than any definitive understanding either of independence or of the basis for the constitutional order—a matter which was not to be considered until more than a decade had passed.

The Declaration of Independence in Historical Context fosters an understanding of the Declaration as the result of an awkward, complex competition of interests and ideas, undermining the Whiggish idea of a republican, individualist constitution.  It helps us ponder anew just what kind of government the Constitution was meant to establish. 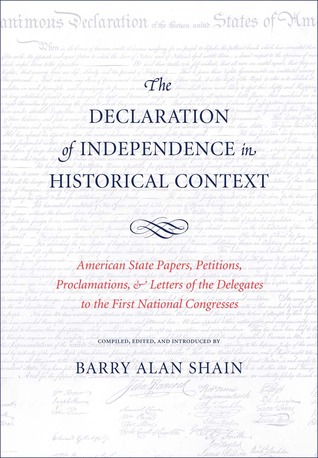