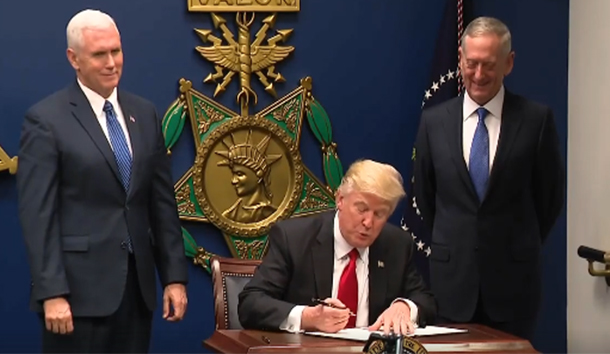 After five days of MSM hysteria, President Trump remains justifiably unruffled by the establishment organs’ opprobrium. His January 27 executive order on immigration and refugees is reasonable and legal, and it enjoys strong popular support.

In the medium-to-long term Trump has much bigger fish to fry than a temporary ban on citizens from seven failed, war-torn, or dysfunctional majority-Muslim states, which were singled out by the Obama Administration under the 2015 Terrorist Travel Prevention Act. Prima facie this was no “Muslim ban”; the most populous majority-Muslim countries (Indonesia, Pakistan, Bangladesh, Egypt, Turkey) were unaffected. The really important part of Trump’s executive order is contained in its Section 1. Purpose:

In order to protect Americans, the United States must ensure that those admitted to this country do not bear hostile attitudes toward it and its founding principles. The United States cannot, and should not, admit those who do not support the Constitution, or those who would place violent ideologies over American law. In addition, the United States should not admit those who engage in acts of bigotry or hatred (including “honor” killings, other forms of violence against women, or the persecution of those who practice religions different from their own) or those who would oppress Americans of any race, gender, or sexual orientation.

Demanding an aspiring newcomer’s commitment to this country’s core values comes as a breath of fresh air. Without naming it, Section 1 implicitly treats orthodox Islam as a violent ideology inimical to America’s “founding principles.” It can and probably will be used to severely restrict immigration of devout, practicing Muslims to the United States. Its drafters displayed awareness that a person’s Islamic faith and outlook is incompatible with the requirements of personal commitment and loyalty to a pluralistic and democratic society.

The Executive Order was carefully crafted: for a Muslim to declare that he accepts the Constitution of the United States as the source of his highest loyalty is an act of apostasy par excellence; and apostasy is punishable by death under the Islamic law. The Sharia, to a Muslim, is not an addition to the Constitution and laws of the United States, with which it coexists; it is the only true code, the only basis of obligation. To be legitimate, all political power must rest exclusively with those who enjoy Allah’s authority on the basis of his revealed will, and America is therefore illegitimate ab initio.

Section 1 effectively demands that a Muslim gives up this key tenet of his faith in order to be eligible for admission. Its drafters knew that a foreigner who becomes naturalized has to declare, on oath, “that I absolutely and entirely renounce and abjure all allegiance and fidelity to any foreign prince, potentate, state, or sovereignty of whom or which I have heretofore been a subject or citizen; that I will support and defend the Constitution and laws of the United States of America against all enemies, foreign and domestic…”

It is sacrilegious for a Muslim to swear to this, since it means that he would be prepared to shoot a fellow Muslim, or denounce him to the authorities, in defense of his adopted homeland. A devout Muslim can become an American citizen only if in taking the oath he is practicing taqiyya, the art of dissimulation that was inaugurated by Muhammad to help destabilize and undermine non-Muslim communities. As Robert Spencer has noted, Section 1, without mentioning Islam or Muslims, arrives at the heart of the problem: “Islamic values always lead to intolerance. Islam’s guiding texts are all fundamentally devoted to separating the world between believers and non-believers.”

Section 1 now provides the immigration officials and law enforcers with a powerful tool to ask pertinent questions, and to weed out dissimulators. The Executive Order calls for the establishment of “Uniform Screening Standards” with the goal of preventing individuals from entering the U.S. “on a fraudulent basis with the intent to cause harm, or who are at risk of causing harm subsequent to their admission.” This will include in-person interviews, forms that include questions aimed at identifying fraudulent answers and malicious intent, and a mechanism to assess whether or not the applicant has the intent to commit criminal or terrorist acts after entering the United States. Daniel Pipes has pointed out that questions must be focused and exact: “May Muslims convert out of Islam?” “Does a Muslim have the right to renounce Islam?” “May a woman show her face in public?” “Should non-Muslims be subject to Islamic law?” “Do you welcome non-Muslims to your house and go to their residences?” etc. Such questions should be repeated in different form over an extended period of time.

The unhappy experience of Europe demonstrates that immigration from majority Islamic nations creates a permanent terrorist threat and adversely affects the host-society’s quality of life. In America the process is not as far advanced as it is in Germany or France; the threat can be checked, and eventually even eliminated. President Trump’s January 27 Executive Order is a major step in the right direction. It clearly treats a newcomer’s adherence to the tenets of Jihad, Sharia, etc. as excludable on political, rather than “religious” grounds.

From now on, it will be legally possible to treat Islamic activism as the grounds for exclusion or deportation. It will also be possible for the government to make exceptions to its refugee injunction “when the person is a religious minority in his country or nationality facing religious persecution,” i.e. a Middle Eastern Christian. This is a major achievement. A new form of clarity on Islam’s political nature is finally present in the White House. Unlike his predecessors, Donald Trump recognizes that we are in a war and in the midst of a clash of civilizations, whether we want that or not.