Will DC Pull Trump Into War in Syria? 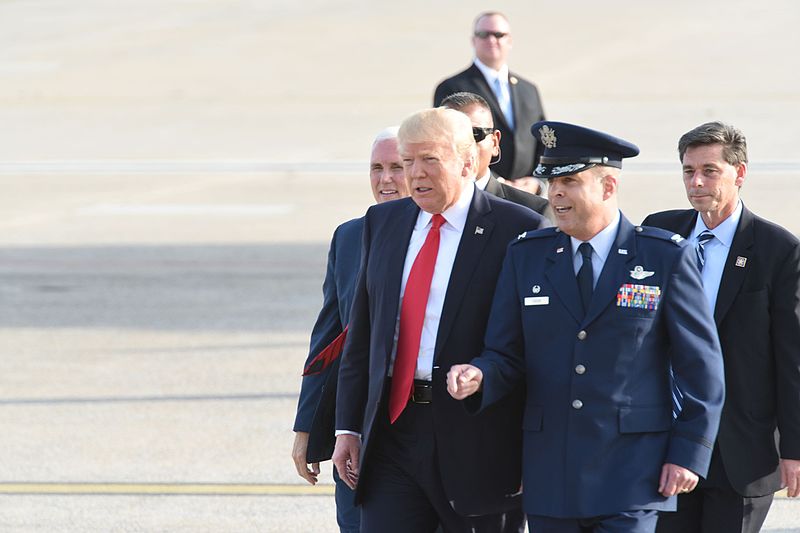 Since Donald Trump entered the Oval Office, he has enjoyed only two brief periods of praise from a mainstream media that otherwise is working overtime to destroy him and his presidency.

One of those periods commenced with his visit to Saudi Arabia, where he effectively reversed his campaign pledge to work with Russia to defeat the jihadists who have been hell-bent on the destruction of Syria for the past six years. Now, it seems, he’s ready to double down on support for supposed “Sunni allies”—that is, the very countries that have been arming the Islamic State, al-Qaeda, and their jihadist, Christian-killing allies. Their goal is to topple the popularly-elected Syrian government and impose brutal Sharia law on its people.

The Deep State and mainstream media are thrilled to see Trump adopt the views of Hillary Clinton, who in their eyes should have been president instead. But the first, brief, media love-fest occurred in early April, when a chemical weapons attack in Syria’s Idlib province prompted an instant military response from the United States. Trump became an overnight hero to those who had been consistently trashing him. As CNN’s Farid Zakaria—otherwise a scathing critic of the president—intoned the day after Trump’s retaliatory strike on a Syrian airbase, “I think Donald Trump became President of the United States” last night.

As the battle for the soul of Trump’s foreign policy continues, I believe it is worth making an objective assessment of the facts surrounding the U.S. cruise missile attack on Syria. In my opinion, that assessment shows that Syria did not gas its own civilians.

In a nutshell, Syrian jets were reported to have bombed the town of Khan Sheikhoun with sarin gas on April 4, 2017. No one disputes that a bombing run took place. In fact, U.S. authorities would have been notified of the attack in advance by the Russian command. Whether that information was passed on to anti-government forces (overwhelmingly al-Qaeda and allied jihadist groups) controlling Khan Sheikhoun is not publicly known.

Within hours of the bombing attack, video of civilians falling victim to a toxic substance received viral coverage around the globe. Sources hostile to President Bashar Assad immediately blamed the Syrian government, which denied responsibility. Three days later, on April 7, the U.S. attacked with over 50 Tomahawk missiles, striking the Shayrat airbase from which the Syrian planes had been launched on April 4.

No one stopped to ask what motive Syria could possibly have had to kill random civilians. The timing was suspicious. On March 30, U.N. Ambassador Nikki Haley, Secretary of State Rex Tillerson, and Press Secretary Sean Spicer had announced an end to U.S. efforts to topple President Bashar Assad. If genuine, that dramatic policy reversal was the predicate for peace in Syria. It was a golden opportunity for Assad—which we are expected to believe he threw away in an irrational desire to kill civilians.

Eight days after the apparent peace overture, missiles rained down on Syria. But reporters never asked why Syria would jeopardize U.S. cooperation by attacking civilians with gas.

The administration’s sudden reversal seemed contrived. Why rush to judgment, relying on films produced by allies of al-Qaeda—which killed 3,000 Americans on 9-11? And how could we analyze conflicting evidence, develop strategy, select a target, issue orders, position forces and launch missiles within just three days? The attack appeared suspiciously preplanned.

Gassing videos came from the “Aleppo Media Center”—a rebel propaganda mill. We never considered that the gas might have come from the terrorists’ own bombed-out warehouse. And yet the possibility is very real. There is precedent for such a scenario: just six months earlier, the U.S. conducted massive B-52 air raids on another poison gas complex operated by terrorists in Mosul.

The Administration angrily denounced skeptics, saying that Assad was worse than Hitler; experts all agreed he did it, and intelligence reports said it was true. But the CIA’s intelligence was unconvincing.

And still, it begged the question: “What was the motive?” Sacrificing everything in order to gain nothing is nonsense. Crimes have motives, and this one had none. Even if he were willing to provoke the U.S. at this delicate moment, why would Assad attack civilians with babies but not soldiers with tanks?

We’ve heard fake CIA reports before. Recall Colin Powell’s ridiculous posturing with a test tube, claiming that Iraq had sarin gas. That lie cost 100,000 Iraqi lives. And what of Senator John McCain’s claim that a “no-fly zone” would save Libyan lives? That zone became a kinetic slaughterhouse that obliterated Libya. So forgive my skepticism about contrived reports that precede these disastrous regime-change wars.

This sarin gas claim mirrored the mysterious 2013 Syrian “red line” gas attack in Ghouta. With scarcely any evidence, Washington blamed President Assad and hastily prepared for war. But, again, he had no motive to kill civilians with poison gas.

The “red line” allegations were debunked by Pulitzer Prize-winning author, Seymour Hersh, who published The Red Line and the Rat Line. He documented how Turkish intelligence agents supplied terrorists with sarin gas and rockets to attack the Ghouta suburb in 2013. Turkish-armed terrorists launched the attack—not Syria.

The 2013 plot to stampede Obama into attacking Syria failed because Americans refused to be tricked into another war. By deferring to Congress, Obama gave an opportunity for an outpouring of opposition across the political spectrum that stopped him. But in 2017, Trump launched missiles against Syria without informing Congress or the American people until after the fact. That was a victory for the terrorists.

This was our first direct attack on Syria, but we have been training jihadists to wage a proxy war on Syria for six years. CIA Program “Timber Sycamore” has been arming and training terrorists to invade Syria since 2012. Battle-hardened terrorists from camps in Jordan, Qatar, Turkey and Saudi Arabia have murdered Christians and other moderates in Syria before returning home to spread a tsunami of terror across the globe. That’s why Congress must pass the “Stop Arming Terrorists Act” (H.R. 608 / S. 532), sponsored by Representative Tulsi Gabbard (D-HI) and Senator Rand Paul (R-KY).

In my assessment blame for the Khan Sheikoun sarin gas attack was wrongly assigned.  The media’s failure to ask what possible motive Syria might have had was a disgrace. Syria had no reason to use poison gas on civilians, and we had no lawful justification for attacking that country.

The April 7 attack was one more deceitful U.S. action against the legitimate Syrian government. America’s war on the Syrian people is cruel and morally abhorrent. We must stop arming terrorists. We must end America’s proxy war on Syria. Donald Trump must resist the siren song of the Washington swamp critters who do not wish him well and are determined to plunge America into another needless, bloody fiasco in the Middle East.

Colonel Richard H. Black (Ret.), Senator of Virginia, 13th District. In 2015, ISIS designated Senator Black an enemy of the Islamic State, naming him “The American Crusader.” Black flew 269 combat missions in Vietnam as a Marine pilot, and was wounded in fierce ground fighting with the 1st Marine Regiment. He became a career JAG prosecutor and ran the Army’s Criminal Law Division at the Pentagon.