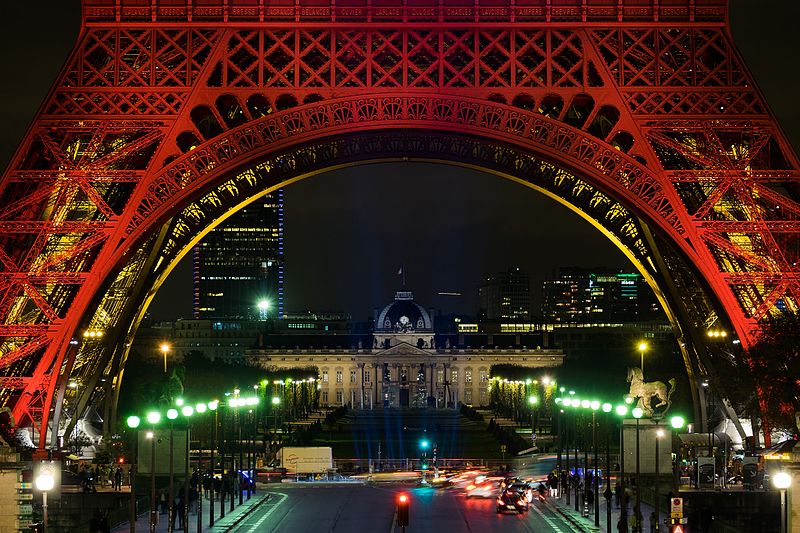 The Western world in general, and Europe in particular, are threatened not only by a numerically small, overtly jihadist cadre of “radicalized” individuals engaging in terrorism. The West is in mortal peril from a demographically explosive, ideologically highly developed, yet decentralized and structurally amorphous Islamic movement.

To discuss the world-historical implications of this movement—which has global proportions and scripturally ordained, literally limitless objectives—I ask our readers to allow me the liberty of posting an article much longer than is our usual blog format.

The appearance of Islam as a political ideology and a guideline for action at the turn of the millennium has had geopolitical and civilizational implications which are outside the permitted boundaries of mainstream discourse on both sides of the Atlantic. It is nevertheless an observable fact, which cannot be compared in vigor, determination, and likely consequences to any other contemporary creed or dogma. It relies on demography as a paradigmatic tool of “asymmetric warfare,” in order to achieve clearly defined, long-term geopolitical gains—conquest and population replacement—unattainable by other means. It also relies on the inability of the targeted societies to defend themselves. The threat is demonstrably present. It requires a rational diagnosis and a coherent plan of defense.

As I wrote in these pages 15 months ago, Spengler famously heralded The Decline of the West in the aftermath of the Great War, but the English title of his magnum opus did not convey the dark, tragic implications of the word Untergang, “going under.” Spengler himself did not anticipate a cataclysmic event but rather an extended decline, a twilight. (Abendland, the West, literally means the “evening land.”) It now appears that the protracted fall is over, and the stage is set for a series of quick, brutal catastrophes.

The notion of decline is not new. In the XVIIth century Sir Thomas Browne lamented that “tis too late to be ambitious, the great mutations of the world are over,” and yet—as a critic had pointed out in a better age—this was the age of Bacon and Descartes, the beginning of those scientific discoveries which had enriched and alleviated the life of man. But this time, like in the fable of Aesop, the warning is apt. The threat is real and present.

The problem is that political correctness has long paralyzed meaningful discourse. Both in America and in Europe there exists an elite consensus that immigration, multiculturalism, and the existence of an ever-growing Muslim diaspora within the Western world are to be treated as a fixed given, and must not be treated as problematic. That elite consensus is ideological in nature, flawed in logic, and totalitarian in application.

Over a decade ago, the onset of a new climate of intellectual intolerance became apparent when the late Oriana Fallaci—for decades Italy’s best-known journalist—was indicted in the Italian city of Bergamo for “hate crimes” and “defaming Islam,” following the publication of her 2002 book The Rage and the Pride. More recently, on December 9, 2016, Dutch opposition leader Geert Wilders was found guilty of “incitement to anti-minority discrimination” for advocating reduced numbers of Moroccan immigrants in the Netherlands. In late 2015, Christoph Biro, editor-in-chief of Austria’s top-circulation daily, the Kronen Zeitung, was charged with “hate speech” for writing that “young men, testosterone-fueled Syrians, carry out extremely aggressive sexual attacks.” In France in 2013, Ivan Rioufol, Le Figaro’s columnist for 30 years, faced criminal charges for “insulting Islam.” Renaud Camus, one of France’s most prominent writers, was charged with “incitement to racial hatred” in 2014, found guilty, and ordered to pay a 4000-euro fine for warning of the danger of the “Great Replacement,” the colonization of France by Muslim immigrants from the Middle East and North Africa.

The problem exists. It needs to be tested against evidence, not against the alleged norms of acceptable public discourse imposed by those who have created the problem in the first place. A related task is to re-think Western security policies, and to correct the absence of a coherent grand strategy.

“One day millions of men will leave the southern hemisphere of this planet to burst upon the northern one,” Algerian President Boumediene famously stated in his address to the UN General Assembly in 1974. “They will burst in to conquer, and they will conquer by populating it with their children. Victory will come to us from the wombs of our women.” The ensuing half-century has produced a host of phenomena of world-historical significance which seem like his prophecy is being fulfilled. As a courageous Italian has warned recently, Europe, as it is aging, no longer renews its generations, “and instead welcomes massive numbers of migrants from the Middle East, Africa and Asia, who are going to replace the native Europeans, and who are bringing cultures with radically different values about sex, science, political power, culture, economy and the relation between God and man.”

“One day” has arrived. The process is not at all spontaneous. Population-changing flows of migrants into Europe and radicalization of the Muslim diaspora in the West may have the appearance of naturalness; but both have been systematically encouraged and facilitated by Saudi Arabia, Qatar, the Emirates, and other less significant state actors. It is striking that the ultra-rich Gulf monarchies have accepted no refugees from the war zones in Syria and elsewhere in the region, while encouraging their westward movement. In the early decades of the twentieth century, interaction between Islam and the West started as a serious challenge to Islam, and by the turn of the millennium it has turned into a threat to the West.

We need a diagnosis of that threat and a pragmatic, workable strategy for countering it. It is time to reject any a priori judgment on the threat’s nature by those who presume to know the correct answer regardless of the evidence. That straitjacket needs to be discarded because the long-term survival of Western culture and civilization is at stake. The sacred texts of Islam, its record of interaction with other societies, and the personality of its founder provide the clue to the motives, ambitions and methods of its contemporary strategists and foot soldiers.

As for the countermeasures, the focus has long been on the institutional failures of the intelligence community and security agencies, and not on the problematic culture of the political decision-makers that makes failure likely. A notable example was the FBI Muslim sensitivity training program. Denounced by scores of active and former agents as ideologically motivated and fundamentally flawed, it was mandated by former FBI Director Robert S. Mueller after the 9/11 attacks. Operational effectiveness must no longer be confused with strategy itself. The impact of the ongoing Muslim migratory influx into the Western world, and the consequences of the ever-growing Islamic diaspora, is inseparable from any coherent long-term defense.

Controlling the borders on land and at sea is only the first step. The application of clearly defined criteria in deciding who will be admitted is essential. To that end, “Islamic activism” needs to be treated as an inherently subversive, eminently political, rather than “religious” activity. Civilizational renewal is the essential prerequisite for all of the above. It can be won only by the West—and above all Europe—that has regained its awareness of its moral, spiritual, and civilizational roots. While such belated recovery remains in doubt, it is not impossible.

Terror, understood as unpredictable violence against non-combatants used in pursuit of ideological, religious and political objectives, is as old as humanity. Its variety which is inspired by the Islamic teaching, tradition, and historical practice has become a global phenomenon, and it is the only variety that threatens “infidel” countries and their inhabitants as such. It belongs to fourth-generation warfare in which it is particularly hard to target the enemy and to evaluate results. Hundreds of terrorists may be killed by drones, and moving money around has been made more difficult; but the potential and actual human assets of the enemy, his reach and operational capability, and especially his ability to count on the support of the multimillion Muslim diaspora in the Western world, are steadily growing. “The United Statest faces its highest threat from Islamist terrorists since 9/11, mostly from those radicalized at home,” according to the House Homeland Security Committee’s Terror Threat Snapshot released in December 2016.

The squeamishness of many Western political leaders in naming the enemy and their use of euphemisms (e.g. Obama’s “violent extremism”) is but one sign of a shared malaise that hampers a coherent effort. A welcome change is that the Trump administration has indicated its intention to rename former President Obama’s “Countering Violent Extremism” program (CVE) to “Countering Islamic Extremism.” This change would reflect Trump’s criticism of his predecessor for refusing to use the phrase “radical Islam” in designating the threat.

George W. Bush’s “war on terror” was hopelessly off-target, confusing the enemy with his tools: had the Senate issued a rallying call for a “war on Elephants,” Hannibal would have marched into Rome. Had World War II been waged as a “war against the Blitzkrieg,” the Reich would still have over nine hundred years to go. But the Romans of the 3rd century BC, and even the Western democracies’ feebler predecessors of eight decades ago, were surer of their identity and values than the dominant Western elites are today.

A phenomenon initially based on local groups that have acquired global reach is morphing into a global network of autonomous cells protected by an enabling community (notably in the suburbs of Brussels and Paris), but with a global cumulative potential. They are fielding a second generation of operatives, many of them naturalized Muslim immigrants and their Western-born offspring. Their decentralized pattern and legal status makes countermeasures difficult. There is no command and control system to disrupt links among autonomous, self-motivated groups of young people, often embedded inside the target-nations. A new strategy is needed. The victory will come not by conquering Mecca for the West, but by disengaging the West from Mecca and by excluding Mecca from from the West. Eliminating the risk altogether is impossible. Managing it wisely, resolutely, and permanently is attainable.

The final task is to develop a more effective modus operandi. The focus so far has been on the institutional failures of the intelligence community and government agencies, rather than on the culture of the political decision-making community that makes failure likely. Above all, operational effectiveness must no longer be confused with strategy itself. A plan for action must entail denying actual and potential hostile subversives a foothold inside the West. Rigorously vetting all prospective newcomers, and systematically monitoring the behavior of all resident aliens and the bona-fides of potential or actual naturalized citizens, is an essential ingredient of a viable strategy.

While there is no single discrete “cause” of the ongoing unconventional warfare against the West, it is necessary to scrutinize the doctrinal and ideological roots of the problem in order to diagnose its key causes and develop effective defenses. This has not happened yet in the decision-making community on either side of the Atlantic; although the Trump Administration appears intent to rethink the issue with welcome clarity.

As recent political upheavals in Europe (Brexit) and America (November 8) indicate, the game is not up. Dar al Islam is not inevitably the end of the road. Tens of millions of Westerners are still endowed with feelings and reason, with the awareness of who they are. Their struggle to defend themselves against the World of Submission is just starting, even if the outcome is uncertain. In the face of historic uncertainty, true to their ancestors, it is to be expected that they will hold on to their patrimony. In the months to come Marine Le Pen and Geert Wilders will show the way.

Previous PostHow Far Will Trump’s Enemies Push to Drag Him and America Down?Next PostForget Flynn: Trump is the Target