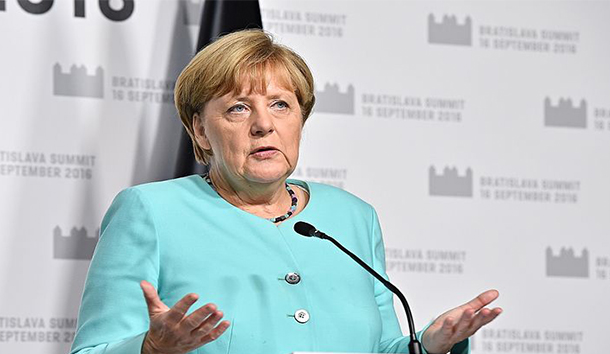 Having written dozens of articles on the subject of Islamic terrorism and Europe’s ongoing suicide, following the latest jihadist carnage in Berlin I find myself lost for words—unable to think of anything useful that has not already appeared on this blog. Let me explain . . .

In August of last year I wrote that Europe’s political elite was guilty of facilitating the third Muslim invasion of Europe: “The post-Christian liberal West, which has lost its sense of purpose and history, is unable to protect itself from those who want to conquer it. It is in need of salvation which Christian charity alone is powerless to effect. A stronger medicine is needed, with possibly unpleasant side-effects for the invading aliens and their offspring. The alternative is death.”

Three months later I noted that the Great Invasion of 2015 was continuing unabated because Europe was rich and decadent, and in all creation disease and frailty invite predators. Both the loss of the will to define and defend one’s native land and culture, and the loss of the desire to procreate, send an alluring signal to the teeming kazbahs and sukhs: Come, for these people no longer have the guts to shed blood—alien or their own—to keep you out in order to survive. Spengler heralded The Decline of the West, yet he did not anticipate a cataclysmic event but rather an extended decline. It now appears that the protracted fall is over, and the stage is set for a series of quick, brutal catastrophes:

Once upon a time the West and the Muslim world could clearly define themselves vis-à-vis each other in a cultural and political sense. What postmodernity and secularism have done, since replacing Christianity as the guiding light of the West, is to cast aside any idea of “our land” . . . in the ethnic, geographic, and cultural sense, a space that has an external boundary and that should be protected from all those who covet it but to whom it does not belong by birthright . . . And Europe stands to lose everything that makes civilized life worth living . . . The monsters in Berlin, Brussels, Paris, Rome, Stockholm and everywhere else who are allowing this abomination to happen, and their gauleiters in the media, are guilty of the greatest betrayal in human history. What they are doing is evil beyond words and beyond endurance. They will suffer the consequences in the fulness of time, of course, because the invaders will not feel any debt of gratitude; but by then it will be too late for the finest civilization the world has ever known.

After the New Year’s Eve orgy of sexual attacks in Cologne and elsewhere in Europe I noted that the consequences of the invasion have been predictable all along. Muslims account for over one-fifth of men under the age of thirty in Germany. They bring with them attitudes based on Islamic dogma, tradition and practice, the foundation of a coherent and consistent outlook that has generated its own reality, visible in each and every traditionally Muslim country. The German establishment is sticking to its suicidal project, but I concluded with the hope that sooner or later the postmodern totalitarian state will be confronted by a belatedly awakened society.

Last March I noted that Chancellor Angela Merkel insisted on keeping Germany’s borders open to migrants (“we can stand by our values”), while at the same time trying to redistribute migrants arriving in Germany throughout the EU through a system compulsory quotas on all 28 member-countries (“I am fighting for this approach”):

Merkel’s motives for pursuing a demonstrably insane course remain mysterious; but whether she is delusional, or ridden by an excessively internalized post-1945 German sense of guilt, is immaterial: “She and the unelected mandarins in Brussels are trying to terrorize millions of Europeans into quietly accepting their demographic and cultural demise. Merkel’s plan is monstrous, the means of its implementation grotesque, the likely results disastrous. Its execution must be stopped by all legal, political, and other means possible if Europe is to survive.”

Last August, I wrote that Europe was in danger of experiencing an Islamic conquista, facilitated by Merkel’s continuing refusal to accept a cap on the number of migrants. Reductio ad Hitlerum is distasteful, I wrote, but in her case the comparison is apt. Both had an abiding contempt for Germany—the real Germany of some 80 million real people, with their highly developed culture and civilization—and saw it as a tool of their Wille zur Macht. Both were perfectly willing to destroy Germany and the German people in pursuit of their ideological obsessions. Both had a soft spot for Islam, manifested in different ways (there are no Muslim divisions in the Bundeswehr just as yet), but based on the same nihilistic rejection of Germany’s Christian heritage. The people will live permanently with the consequences of their leaders’ fateful decisions. Their homegrown jihadists will go on killing hundreds if not thousands of their “fellow citizens” every year.

I concluded that the lesson of Europe for America is clear: The emergence of an autonomous and politically untouchable Muslim diaspora must be prevented. We need an open-ended moratorium on Muslim immigration now, while those who are already here still lack the numbers and infrastructure to wreak havoc. In addition, Islamic activism should be treated as grounds for the exclusion or deportation of any alien, regardless of his status, because sharia advocacy is inherently prejudicial to the public interest and injurious to national security. The alternative is the predictable pattern of terrorist violence, social corrosion, and cultural decline that we are witnessing in today’s Europe.

Finally, commenting Geert Wilders’ conviction in Amsterdam last week, I noted that the establishment “center-Left” and “center-Right” parties were indistinguishable from each other on the subject of self-annihilation. For as long as Holland, France, Germany and other European countries retain their Islamophile, Jihad-friendly laws on the statute books, the threat of prosecution hangs above everyone’s head; but “the spell of fear must be broken, just as it was in Poland in 1981 and elsewhere all over the Eastern Bloc soon thereafter.”

What can I add? If the carnage in Berlin helps break the spell of fear among ordinary Germans, if it opens their eyes to the existential danger they face, and if it contributes to Angela Merkel’s long-overdue departure from the political scene, the victims will not have died in vain. Let us keep them, and all Christkindlmärkte, and all of Europe, in our prayers this festive season. Merry Christmas.