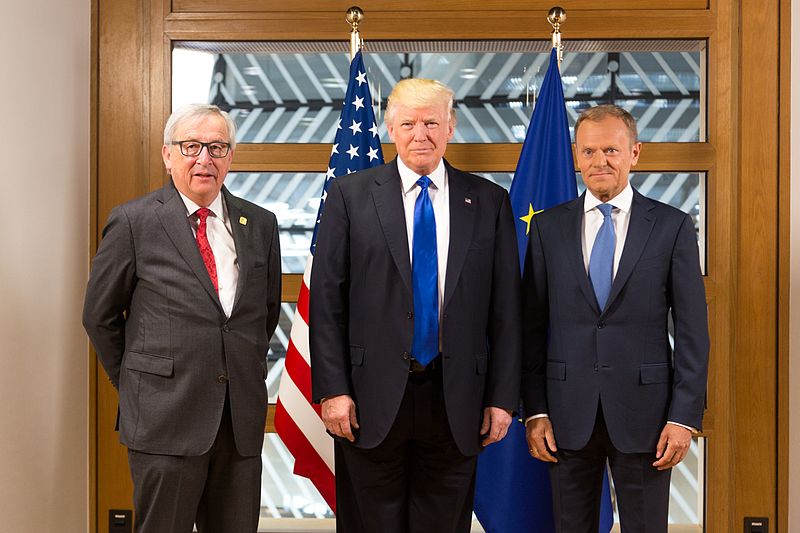 According to the media machine and pundits on both sides of the Atlantic, President Trump’s recent attendance at two summits—in Brussels (NATO) and Sicily (G7)—went very badly. He went through many tense encounters, made a number of statements his interlocutors did not like, notably on the uneven burden of defense costs, on his dislike of the Paris climate change accords, and on German trade sufficits. Significantly, he sounded lukewarm on NATO’s Article 5 (“all for one, one for all”). Some Europeans tried to score a few domestic points by exploiting latent anti-Americanism in their encounters with Trump, notably the newly elected French president Emmanuel Macron with that now famous gladiatorial handshake.

According to The Guardian, Trump’s visist has left the continent’s leaders aghast, but at the same time it has had one unexpected positive consequence. Just like the Soviet threat forced Europeans to focus on what they had in common and how to protect it, this theory goes, Trump’s attitudes  may help improve Europe’s ability to integrate: “The continent’s interests lie in making sure the toxicity of Trump is somehow curtailed. That can only happen if it sets new ambitions for itself. Just weeks after Emmanuel Macron’s electoral victory in France brought a major moment of solace, Trump’s tour will have starkly reminded Europeans of the new world of uncertainties, and the need to pull together.”

According to another commentator writing in the same organ of Britain’s leftist bein pensants, “In truth, Trump’s mixture of vulgarity, arrogance, ignorance and rudeness makes Europeans secretly feel extremely good about their own sophistication and civilised manners. Contrasts can be soothing. Just as Europeans decided Brexit needed to be dealt with in unity . . . Trump is fast turning into a binding factor.” In brief, the postnational elite loathes Trump and wants a new global strategy “for a world where, every so often, the US electoral cycle produces a corrupt, deluded isolationist who can think only in monosyllables.”

This sentiment was reflected in German chancellor Angela Merkel’s unusually blunt statement at an election rally in Munich last weekend: “We Europeans truly have to take our fate into our own hands,” she said, “naturally in friendship with the United States of America, in friendship with Great Britain, as good neighbors with whoever, also with Russia and other countries. But we have to know that we Europeans must fight for our own future and destiny. The times in which we could rely fully on others, they are to some extent over. This is what I experienced in the last few days.”

In Europe Merkel’s statement caused an instant sensation. In America the globalist establishment predictably chastised Trump for undermining our partnerships and alliances of long standing. Richard Haass, president of the U.S. Council on Foreign Relations, called Merkel’s comments a “watershed,” and warned that the resulting scenario is “what U.S. has sought to avoid” since World War II. On the whole it would be very welcome news if the German Chancellor really meant what she said, but there is less than meets the eye.

If Merkel was serious, over 50,000 American soldiers can finally be withdrawn from Germany, where their stay has not had any military-strategic justification for the past twenty-six years. She is loath to do so, because their upkeep at the U.S. taxpayers’ expense is a boon to the German economy. If she seeks military self-reliance, then Germany—with the GDP of $3.4 trillion—will have to spend considerably more on defense in the future than the miserly 1.2 percent she is spending at the moment. It seems, however, that Merkel still wants to have it both ways: the days of full reliance on the United States are over, she says, but only “to some extent.”

The real meaning of Merkel’s words is clear if we replace “we Europeans” with “I” or “we Germans.” In addition to “the Russian threat,” Trump’s “unpredictability” is a perfect excuse for Euro-federalists to push for a massive restructuring of Europe’s political, economic, military, and trade strategies in order to turn the EU into a superstate, a German-led geopolitical player in its own right. The oligarchs in Brussels can hardly wait: after an icy meeting with Trump, the European Council president Donald Tusk declared that “the greatest task today is the consolidation of the free world around values, not just interests.” Merkel’s and the superstaters’ long-term hope is that Trump will be a single-term president, but that the consequences of their “taking fate into their own hands” and imposing an ever-tighter union will be permanent.

While Trump’s visit to the Middle East was an all-round disaster (see my column in the July issue of Chronicles), his subsequent five days in Europe are worthy of praise. Donald Trump is the first American president since the United States became permanently embroiled in European affairs in 1947 to tell the leaders of the Old Europe that they cannot and will not have it all. They have extravagant welfare programs, insanely suicidal immigration policy, prohibitively expensive PC-driven programs, and minimal defense spending. In the name of “Eastern partnership” they have engaged in risky and provocative East European gambits, notably in Ukraine. They want to have a permanent American blank check that the elite’s climate swindle will be duly bankrolled by all, and that American soldiers and weapons will be on hand if the Russians get fed up with all the geopolitical games. They want “Europe” to set the agenda of what are “our shared Western values,” open borders and cultural and civilizational self-denial included, and they reserve the right to be haughty and sanctimonious at any sign of non-compliance.

Donald Trump has signaled—in his own  way, bless his soul—that such smug arrogance will no longer be tolerated. By refusing to be in cohorts with the most powerful Europeans of our time, Trump has not done a service only to his own people. He has also acted like a friend to the millions of Europeans who do not cherish the notion of their future and their destiny being decided by the gangsters at the European Union headquarters in Brussels, by the demented Fuehrerin in Berlin, by her Oedipally afflicted lapdog in Paris, and their ilk.

Previous PostThe Moral Clarity of the Morally DepravedNext PostIs Afghanistan a Lost Cause?