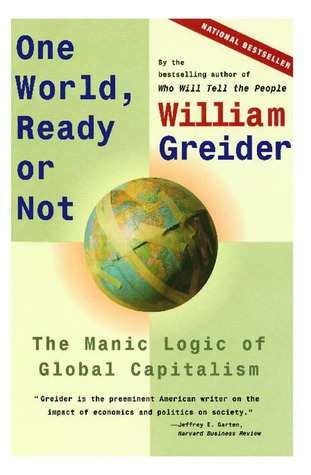 From the June 1997 issue of Chronicles.

The global industrial revolution being engineered by multinational firms and the dismantling of international trade barriers have produced wrenching social changes and will unleash more. Rolling Stone National Editor William Greider, author of Secrets of the Temple (on the Federal Reserve) and Who Will Tell the People (on contemporary politics), here surveys global capitalism and its “contradictions,” and offers reforms to rectify them.

Greider’s central message is a “reasoned warning”: global capitalism “appears to be running out of control toward some sort of abyss.” While technological progress propels capitalism’s global revolution, its “dirty little secret” is its tendency to depress a firm’s rate of return per unit of output. Driven therefore to reduce costs, capitalism is shifting production to low-wage countries—simultaneously creating excess capacity and supply and suppressing demand. Hence it is haunted by the possibility of a crisis of overproduction, and the more it cuts costs at labor’s expense, the more likely the crisis becomes. Finance capital, “the Robespierre of this revolution,” churning from country to country, destabilizes things further.

The cost-minimization drive is creating “tax arbitrage,” whereby firms play cities, states, and even nations off against each other, locating where tax breaks are highest. Developing countries, meanwhile, extract favors from firms—for example, requiring Boeing to give them a share of input production, advanced technology, and know-how in exchange for buying Boeing aircraft. Asian countries are emulating Japan’s development model: high-quality exports and heavily-protected domestic markets. This only works, though, as long as America serves as “buyer of last resort,” absorbing the resulting trade surpluses. But, Greider warns, America, her purchasing power falling, is becoming unable to prop up the global economy.

Greider finds finance capital equally irrational. Not only are governments assuming bad private debts, but finance capital and currency speculators such as George Soros are powerful enough to overwhelm governments. Speculative capital’s entry into a country can spark an unsustainable boom; its abrupt exit can inflict credit starvation and collapse. Such was the ease with Mexico, whose economic implosion, which Greider narrates in harrowing, eyewitness detail, has abundantly justified NAFTA’s critics. Finance capital’s irrationality is epitomized by the Third World countries’ external debt, soaring beyond hope of repayment, to an estimated $1,945 billion by the early 1990’s.

A good journalist, Greider is highly informative on globalization and its problems. His visits and interviews in Germany, China, Malaysia, Mexico, and elsewhere greatly enhance his credibility. One of this book’s great merits is its exposure of the chasm between freemarket rhetoric and the realities of interfirm cooperation to lessen competition, and of pervasive government involvement in managed trade, production decisions, and finance.

Much of Greider’s book is welcome. His warnings about chronic trade imbalances and destabilizing speculation-driven capital movements are cogent. So is his argument that America must halt “unbalanced trade that is draining national wealth,” and focus on “defending the U.S. industrial structure and employment, not the U.S. multinationals themselves.” Many of his proposals—a small transaction tax on international capital flows; Third World debt forgiveness; emergency tariffs to rectify radical trade imbalances; a constitutional amendment forbidding tax favors for industrial investment; abolition of the World Bank, International Monetary Fund, and Export-Import Bank—are sensible. Moved by the “barbarity” of working conditions in developing countries, Greider argues eloquently for labor’s rights.

Unfortunately, Greider’s economics are badly muddled. Bemoaning excess capacity and oversupply, he demonstrates only the former. His incessant assertion that Western wages are declining rests on confusion of displacement of labor to lower-paying jobs with “falling wages”—a term which, used properly, means jobs paying lower wages than before. He blames the Depression on overproduction and underconsumption, fallacies which Murray Rothbard’s America’s Great Depression explodes, and calls Federal Reserve policy in the 1920’s “extremely restrictive,” when it was actually inflationary. His proposal for higher taxes on skilled labor would stupidly punish intelligence.

Greider’s analytical perspective is essentially Marxist economic determinism—forces and relations of production drive everything—and merely globalizes Das Kapital‘s “crisis of overproduction.” He would have done better to forsake this long-exploded rubbish and invoke international trade theory’s factor-price equalization theorem, which states that free trade will equalize factor prices, such as wages, between countries, and show how globalization promotes this. The grinding-down of American wages, induced by globalization, and living standards is a legitimate concern. Unlike Marx’s “crisis of overproduction,” factor-price equalization isn’t a handy peg for doomsaying, but it has the merit of soundness. Yet Greider ignores it.

He does show, unintentionally, that globalization and paleoconservatism are mortal enemies. But paleocons who think they have found an ally in Greider should think twice. Echoing The Communist Manifesto, he lauds the bourgeoisie’s culturally revolutionary role, demolishing insularity, promoting multiculturalism. Globalization, he rejoices, “is visibly dismantling enduring stereotypes of race and culture, ancient assumptions of supremacy”—which, he plausibly argues, is its “most radical dimension.” Hence American politics’ “preoccupation . . . with race and cultural superiority seemed ludicrous, out of touch and perhaps dangerous.”

Deriding “right-wingers who continue to rant occasionally about ‘one-worlders’ subverting American sovereignty,” he fears that capitalism’s crisis will provoke “narrow, nationalistic protectionism based on racial and cultural nativism,” and perhaps fascism. Fascism arose, he argues, in response to dislocations caused by capitalism—yet fascism was weakest where economic liberalism was strongest, and vice versa.

But Greider has a larger agenda. Understanding globalization’s “deepest social meaning” to be that we are citizens of one world, Greider calls for a “global humanism” grounded in the reality that “we are all in this together.” He wants “equitable”—meaning egalitarian—distribution. While speculating that global industrialization and affluence are economically and environmentally untenable, he seems to deem affluence a universal entitlement. Universalizing capital ownership and recycling waste produced by “closed-loop” production processes are his favored escapes from the bind. One wonders how all this could be implemented without a global superstate of unprecedented power.