From the October 1993 issue of Chronicles.

A favorite exhortation of those seeking to further restrict or remove the private possession of firearms in the United States is to “look at other countries,” where lower murder rates are supposed to be a result of gun control laws. The underlying presumption beneath these laws is that guns cause crime. Getting rid of guns, or at least severely limiting them, reduces, so we are told, the level of violence in a given society.

Kopel, a prosecuting attorney in New York City before moving to Colorado where he served in that state’s attorney general’s office, now practices law in Denver and is an associate policy analyst for the Cato Institute. His careful analysis of the data from other countries as compared with the United States reveals major flaws in the assumption that foreign gun control laws can be successfully grafted upon this country. As Kopel repeatedly shows, foreign gun laws are applied in an environment of greatly restricted civil liberties and other social controls.

Arms control in Japan began as far back as the 16th century as a way of facilitating the collection of taxes, and from that time on, arms were considered the emblem of a nobleman. Common people were to remain unarmed and to pay taxes. Today, the Japanese tolerate a level of authoritarian intrusion into their lives that would be unacceptable to Americans. (However, the federal government’s assault on the Weaver family in northern Idaho—killing a mother holding her baby in her arms and a 13-year-old boy—and its attack on the Branch Davidians in Waco, Texas, may be more widely accepted by Americans today than they would have been by their forefathers.)

Kopel finds a significant difference between the American and the Japanese understanding of the “rule of law” and quotes a Japanese writer to make the distinction: in America, “rule of law” expresses the subordination of government to the law; in Japan, “rule of law” refers to the people’s obligation to obey the government and is thus “an ideology to legitimize domination.” Even language supports the Japanese anti-individualist view: the Japanese word for “different” also means “wrong.” Kopel makes a telling point when comparing the former Soviet Union with Japan: “Other nations, such as the former Soviet Union, have had severe gun control, less [sic] criminal justice safeguards, and more unconstrained police forces than Japan. But the Soviets’ crime rate was high while Japan’s is miniscule because Japan has the socially accepted and internalized restraints on individual behavior that the Soviets lacked.” The Japanese also accept a degree of police control over their lives that Americans would reject. In Japan, for example, the police are permitted to come into a house and look around—all without a warrant. Detaining a suspect without a lawyer until he confesses is standard procedure. That is all part of their understanding of the “rule of law.”

The absence of guns among the Japanese civilian population has not prevented suicide; indeed, the Japanese suicide rate is twice that in America. Even more interesting is the fact that if murder and suicide rates are combined, the United States is slightly less violent than Japan: 20.1 per 100,000 as compared to 21.9. While the overall combined rates are accurate, the relatively high number of Japanese suicides is probably inflated. Many Japanese suicides involve the murder of other family members by the one committing suicide. But dead is dead.

Kopel quotes an American journalist who said after a visit to England, “One axiom I heard a lot when I was there: ‘We’re subjects. You’re citizens.'” The British, although less authoritarian than the Japanese, view the American tradition of “government as servant and subject to the people” as anarchistic. While historically this distinction seems accurate enough, this American tradition of self-reliance is under fire.

The New Jersey Supreme Court rejected a constitutional challenge to a gun control law on the grounds that the American right to bear arms derives from the British and that in modern times the British right has vanished: “For all practical purposes the average citizen cannot lawfully obtain firearms in Great Britain at the present time.” The Court revealed its ignorance insofar as the average Briton can obtain firearms (limited in number and variety), while the right to keep and bear arms in the United States is hardly based exclusively, or even primarily, on the British precedent. Kopel’s study of the history of firearms possession in Britain makes it clear that, at least in the past, the British understood that widespread ownership of firearms meant freedom, that he who controls the militia controls the state. But when the state (king, legislature, or president) controls the militia, freedom dies.

In Britain, gun control was imposed to contain not common criminals but rather political opponents; murder rates have actually increased slightly since the imposition of gun controls in England. And firearms restrictions have been notoriously ineffective in controlling violence in Northern Ireland, which is, after all, part of Great Britain. It is worth noting that Kopel finds that willing acceptance by British gun owners of moderate controls has not prevented the subsequent imposition of increasingly restrictive measures.

Gun control advocates must wish that Switzerland and Israel did not exist, since the environmentalist notion that an object causes human action—that guns cause crime—fails miserably to explain these two countries: both countries have civilian populations armed to the teeth, and both have among the very lowest murder rates in the world.

Once a Swiss citizen has a firearms purchase certificate, he may purchase any number of unregistered firearms. If he is a male, he must serve in the military. When not on active duty (48 to 50 weeks of the year), he is required to keep his fully automatic firearm at home. The murder rate in Switzerland is actually lower than that in Japan, where the civilian population has virtually no access to firearms. For centuries the Swiss have viewed weapons as synonymous with citizenship; in Switzerland, to put it differently, the symbol of a free man is ownership of one or more firearms. (It should be added that while Switzerland has a suicide rate twice that of America, only 35 percent of suicides are committed with firearms.)

The Founding Fathers of the American Republic intended that universal gun ownership should prevent the federal government from having a monopoly of force. The goal was “to prevent a standing army, the bane of liberty,” said Elbridge Gerry of Massachusetts, one of the members of the Constitutional Convention. The West (from the Shenandoahs to the Rockies and beyond) was opened by armed Americans moving ahead of the police or the army. This experience was very different from anything in British, as well as in Canadian and Australian, history—though not, interestingly, from the example of New Zealand, whose gun laws are among the least oppressive of the English-speaking world.

Kopel devotes a fascinating section of his book to the rise of vigilantism in the absence of police service, or when the police have been totally corrupted by the criminal element. Contrary to the Hollywood depiction, vigilantes tended to represent the sense of the community and were drawn from leaders who were well-established and elected. They usually ran criminals out of town in preference to executing them.

The history of race relations in America has been influenced by the right to keep and bear arms; the 14th Amendment was added to the Constitution, in part, to overturn Jim Crow laws in the South, one of the purposes of these laws being to disarm blacks. The logic was simple: disarm the freedmen, and it would be easier to continue their slavery de facto. Less than a century later. Deacons for Defense and Justice armed and organized in order to protect civil rights workers who could expect little or no protection from some Southern sheriffs. Surprising as it sounds today, the NAACP convention of 1957 resolved that, “We do not deny but reaffirm the right of individual and collective self-defense against unlawful assaults.”

Kopel’s analysis of contemporary violence in America leads him to conclude that Americans are not very likely to want to give up their guns, since the claim that “the police will protect us” is less and less credible. As a chief justice of the West Virginia Supreme Court has remarked, “Private security guards are simply vigilantes for the rich.” Clearly, for the rest of us who cannot afford our own vigilantes, a handgun in the pocket and an AK-47 for defense from social disruption (as in Los Angeles in April 1992) seem to be the accepted answer for a growing number of people. Besides, self-defense may actually be safer than police protection, since police shoot innocent people 5.5 times more often than do civilians. 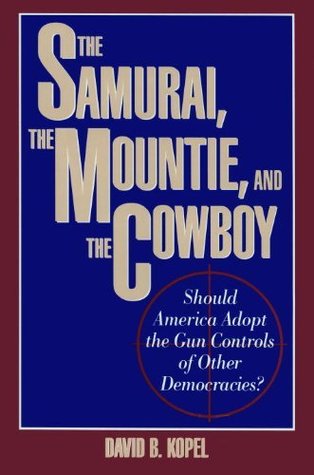 [The Samurai, the Mountie, and the Cowboy: Should America Adopt the Gun Controls of Other Democracies?, by David B. Kopel (Buffalo: Prometheus Books) 420 pp., $28.95]