The Globalists go for Broke: The Russian E-mail Hacking Story 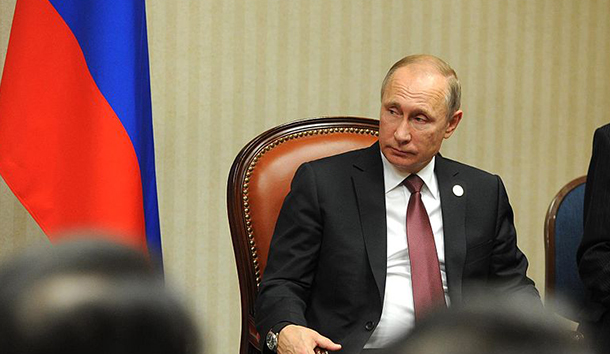 The Democrats’ hissy fit over the Trump election victory continues, with the usual suspects piling on with claims that the Kremlin hacked the Democratic National Committee and the Clinton campaign’s e-mails in order to help Trump get elected. Obama’s deputy national security advisor, Ben Rhodes, upped the ante by claiming that Putin personally directed the cyberattacks, while White House spokesman Josh Ernest went even further, asserting that Donald Trump “obviously” knew what was going on, completing the scenario Trump’s enemies have been trying to foist on the public, one of Trump as the witting agent of the Kremlin’s nefarious plot to subvert the American political system. Not surprisingly, some GOP establishment figures are aiding and abetting the attacks.

The CIA, headed by former Obama Advisor John Brennan, harshened its assessment of the Russian hacking allegations after the outgoing president ordered a review of the e-mail leaks, making it clear he wanted a report before he left office in January. Previously, U.S. intelligence agencies had not gone as far as the CIA did in its leaked mid-December report, which claimed that Russia’s aim in directing the e-mail attacks was to sway the election in favor of Trump. The FBI, headed by James Comey, and Office of the Director of National Intelligence, James Clapper, reportedly had refused to endorse the CIA report, saying there was no hard evidence that the hacks had been meant to influence the outcome of the election.

On December 16th, however, Brennan released a statement to CIA employees claiming that both Comey and Clapper had, in fact, accepted the agency’s assessment. Yet Comey reportedly had called Trump to tell the president-elect that he did not believe the Russians influenced the outcome of the election, that there was no conclusive evidence that the Russians sanctioned the hacking, and that Clapper agreed with him.  According to a report carried by Newsmax.com, Comey told Trump that Brennan “takes his marching orders from Obama.” In October, the FBI had, after much prodding from the Democrats, concluded that there was no link between Trump and the Russian government. Ironically, Comey, who could find no evidence of “criminal wrongdoing” in the Hillary Clinton e-mail scandal, had also been accused by outgoing Senate Minority Leader Harry Reid of a cover up of evidence of Russian hacking.

Meanwhile, Julian Assange of WikiLeaks has claimed that he did not get the e-mails from the Russians, while an associate of his says that the e-mails were leaks from inside the Democratic party, the leakers (there were two separate groups of e-mails released, one from the Democratic National Committee, the other from Clinton campaign director John Podesta) having been disillusioned by the DNC’s treatment of Bernie Sanders and the corruption of the Clinton Foundation.

Veteran Intelligence Professionals for Sanity, a group that includes former CIA and NSA officials who had disputed the intelligence cited to justify the Iraq war, has also disputed the claims of proof of Russian hacking. Theintercept.com’s Sam Biddle has raised some serious technical questions about the alleged involvement of Russia in the e-mail leaks, saying the evidence presented publicly thus far is “not enough” to prove Russian involvement.

In Moscow, apart from official denials of any Russian hacking, Russian sources, including some who have not been friendly to Putin, have raised questions about the U.S. claims. Though some sources believe that a Russian hacking story is plausible, they tend to believe that Moscow, if it did anything, was probably intending to send a warning to Clinton, who has been very hostile to Putin and Russia, not because the Kremlin thought it could influence the election outcome, but because Putin believed Clinton would win. Others believe that the scandal being inflamed by the Democrats is aimed at solidifying anti-Russian sentiment in Washington and preventing any improvement in US-Russia relations.

Whatever the truth is behind the claims of Russian involvement in the release of the DNC/Clinton e-mails, a few things have become clear.

First, though it is extremely difficult to determine unequivocally the authenticity of such a mass of materials (has anyone read and attempted to verify all of them?), the e-mails were apparently genuine, despite early attempts by Clinton-friendly sources to insinuate they had been tampered with. Obama himself recently said that the e-mails were “fairly routine”—simultaneously appearing to say they were genuine and raising questions about how “fairly routine,” unremarkable e-mails could sway an election.

The “fairly routine” e-mails only confirmed what we already knew or suspected—the DNC had sought to sabotage Bernie Sanders’s campaign, the Clinton campaign and the DNC held the American people in contempt and planned an attempt to subvert the Roman Catholic Church in America, and the Clinton Foundation was a cover for “pay to play” schemes. Hillary Clinton had herself let the cat out of the bag on some of these points in her remarks last summer, when, in reference to abortion, Clinton said religious beliefs would have to change, and again during the presidential campaign, when she called half of Trump supporters “deplorables”.

Trump’s enemies have further pointed out that only e-mails from the Democratic side of the campaign were released, claiming that indicates the hackers intended to hurt Clinton and help Trump.  But that assertion raises other obvious questions: Wasn’t the Republican establishment as much opposed to Trump as the DNC? Wouldn’t there likely have been some quite juicy e-mails related to GOP establishment efforts to sabotage Trump? If Russia was behind the DNC/Clinton leaks, and intended them to help elect Trump, why not go after the Republican establishment as well? (There is some dispute about whether GOP systems have been hacked. Some reports have hackers penetrating GOP computer networks. Former Republican Party Chairman and incoming White House Chief of Staff Reince Priebus has claimed that the RNC was not hacked.)

Second, despite disclaimers in a number of articles concerning the leaked CIA report (that there was no CIA assertion that the leaks had actually determined the outcome of the election), it’s also clear that the not so hidden subtext of this story is that the Trump victory was tainted and the election outcome illegitimate. This is part of an apparent full scale effort to undermine the Trump presidency, if not lay the groundwork for a broader attack that might at some point include an attempt to remove him from office. The pleas of Clinton supporters to electors not to vote for Trump are another aspect of the campaign to at least hamstring the incoming administration.

And third, the e-mail leak story is another attempt by the establishment and its minions in the main stream media to set the news agenda and the framework for what will and what will not be a subject of public discussion. The claims of Trump being a Russian stooge and the implication that he could be subject to manipulation or even blackmail by the Kremlin are outrageous to say the least—and they willfully ignore the machinations of the Clinton Foundation, machinations that included an apparent “pay to play” deal when Hillary Clinton was Secretary of State, a deal that involved selling off 20% of American uranium production to Russia. Wouldn’t such a scheme have made Mrs. Clinton subject to Russian pressure? Does anybody in power care? The sordid workings of the Clinton Foundation, not to mention the Clinton e-mail scandal, have (no surprise here) disappeared from the MSM’s radar.

The hysterical, unsubstantiated claims being made by the Obama/Clinton camp are a desperate attempt to delegitimize, if not overturn, the results of the presidential election, underscoring the U.S.A.’s devolution toward the status of plutocratic banana republic, an all-too-common type of system marked by election struggles (where they take place at all) that often become destabilizing duels between opponents who fear losing their freedom, if not their lives, in the event of electoral defeat. That Trump’s opponents are pushing the country in that direction is especially infuriating after their exploitation of the will-you-accept-the election-results meme against Trump during the campaign. As former State Department whistleblower Peter Van Buren has written, “Attempts to overturn the results of our election, or to delegitimize a president before he even takes office, are attempts to overturn the system of transfer of power that has served America well.” Once that system has been seriously damaged, it may not recover.

Finally, the degree of foreign influence on American politics is a scandal hiding in plain sight—and doesn’t seem to have bothered Washington too terribly in the past. Washington has been a frequent player in such games, and that’s not to mention “regime change” operations that have often not turned out so well. The hypocrisy on display is embarrassingly transparent, or it would be embarrassing to the platers involved if they were not thoroughly convinced of their own superiority and entitlement to rule. In their eyes, “democracy” means they win. The populist, anti-globalist, trend that Trump’s win represents is an existential threat to the globalists and they are acting accordingly.