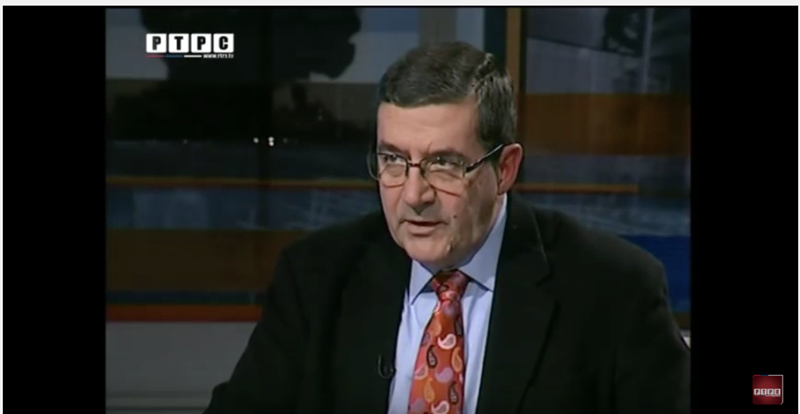 Q: There’s a whole host of generals among Trump’s appointees. Is he creating a junta?

ST: First of all, we should differentiate between political generals and true soldiers. Men like Wesley Clark and Colin Powell, or even David Petraeus, are primarily political generals. But if we look at retired general Michael Flynn, the new national security advisor, or at “Mad Dog” Mattis, we see men who—their occasional surplus of adrenaline obligatory in a true warrior notwithstanding—also know the price of war. They are far more acutely aware of the cost of maintaining a global empire than all those neoliberal or neoconservative theorists who are at the Heritage Foundation today, at the Department of State tomorrow; or at Brookings today, at the Pentagon tomorrow . . . plotting their no-flight-zones in Syria and similar schemes, with all the attendant risks and escalation potential.

Q: What do you think of Trump’s appointment of the new Secretary of State?

ST: Rex Tillerson is a successful businessman. Heading the seventh corporation in the world by revenue—with active operations in dozens of countries—is a far greater challenge, and much better qualifying experience for a secretary of state, than belonging to the Washington machine, which characterized a host of other potential candidates for the post. Mitt Romney was supposedly a contender; but if we look at his 2012 campaign, we see that he was merely repeating the old slogans of American exceptionalism and full-spectrum dominance: there had never been any significant difference between him and the liberal-interventionist establishment. Tillerson, by contrast, is a pragmatist. He signed a significant oil exploration and drilling contract with Russia in 2010, providing Exxon’s technology which the Russians do not have, and received a decoration from Putin in 2013. He is openly skeptical of sanctions, for which he may well be grilled before the Senate during his confirmation process—because of the potential conflict of interest . . .

ST: We see a clash within the intelligence community between some Clinton-loyal deep state operatives in the CIA and their opponents, primarily within the FBI. The claims of Russian hacking have been made by unnamed sources in the Washington Post. This is a desperate attempt by the old neoconservative-neoliberal Duopoly to additionally poison the relations with Moscow even before Trump’s entry into the White House. They want to initiate a never-ending inquiry, which would then be used to sabotage his attempts to overcome the Obama administration’s toxic legacy in the U.S.-Russian relations. I do not believe they will succeed, for the simple reason that there is not enough meat in the story. All we have are certain allegations unsupported by any serious evidence, innuendos and supposedly circumstantial connections.

Q: Is there any way for the electoral college to overturn the result next week?

ST: Not at all. There would need to be a whole host of rogue electors, and there is no sign of any such momentum. In any event, even if we imagine such unlikely scenario, do not forget that Trump’s voters are the ones who have the guns . . . and all sorts of other weaponry; and that they are sick and tired of the tricks which have been played on them for so long; and that the forces of law and order, or the military, would not be willing to enforce any such travesty. They are well aware of Hillary Clinton’s baggage, her deep and abiding animosity to the men in uniform . . .

At the Department of State, the new team should expect obstruction from the inherited civil service structure which has completely internalized all globalist tenets. These people will do their best to subvert Trump’s foreign policy initiatives. In his final weeks John Kerry has gone out of his way to save what can be saved for the jihadists in Aleppo, and he was probably privy to the decision to let the Islamic State attack Palmyra, and at the same time to order a halt of the offensive against Raqqa. These are the last throes not only of a departing administration, but of a duopoly that has been pernicious both to America and to the rest of the world.

Q: While Assad’s forces are clearing Aleppo, we saw the ISIS forces’ offensive against Palmyra—somewhat strange, isn’t it?

ST: Your viewers who read English can check out an article on chroniclesmagazine.org which I wrote some six weeks ago about the attack on Mosul. [It is here] I predicted that it would be a stage-managed operation, that the bulk of the Islamic State forces would be allowed to withdraw to Syria, and that the whole thing would be hailed as a glorious success of the reconstructed Iraqi army, after its debacle in Mosul in June 2014.

Q: But only the other day some one hundred Iraqi army soldiers were killed in an American airstrike, supposedly by mistake?

ST: Just as they killed dozens of Syrian soldiers by mistake two months ago. The Iraqi army is Shiite-officered and most of its rank-and-file are Shiites. It was rather gung-ho to fight the staunchly Sunni ISIS in Mosul, they were getting out of control, and this was a timely warning: gentlemen, watch your step, we do not want the Islamic State’s fighting core to be degraded, we have plans for them elsewhere. And now we know where exactly is this other place. At the same time, the attack on Raqqa was aborted. The one odd thing is that the IS column, with four to five thousand fighters, with trucks and tanks, could cross 200 kilometers [125 miles] across open terrain unhindered. I can understand that the American military did not want to do to them what they did to the Iraqis on the Highway of Death in 1991, but the Russians were also strangely inactive, and they have all sorts of intelligence assets and control the air in the area . . .

If this was a trap, an intended cauldron, don’t forget that the Islamic State has experienced foreign officers as advisors, both Western and Turkish, who would have been able to warn them of this potential danger: watch it, your lines of supply or retreat may be cut off. On balance, I think that the plan was to force the Syrians to withdraw some of their forces from Aleppo, which would give a chance to the almost-extinguished ambers of rebellion in that city to flare up again. The Syrian army, after all the trials it has endured over the past five years, does not have the capacity to fight a major battle in several places simultaneously . . .

One reason for optimism in Syria is the fact that Recep Tayyip Erdogan has to exercise restraint. Some ten days ago he said that the purpose of the Turkish army’s intervention in Syria was to bring down the “dictatorial” regime of Bashar al-Assad. Only two days later, after a telephone conversation with Putin and the meeting of the two countries’ foreign ministers in Turkey, he completely changed his tune and said that, of course, the purpose of the intervention was to fight terrorists of all kinds. With this choice of phrase he implied that the Kurds were just as “terrorist” as the Islamic State. But Turkey’s maneuvering space is now limited. Ankara is demanding the extradition of the prominent preacher, [Fethullah] Gülen, who lives in Pennsylvania, but the United States will not oblige. Erdogan also faces much criticism from Brussels and from the European Parliament in Strasbourg, and he cannot afford the luxury of straining his relations with Moscow yet again over Syria. In reality, Russia is right now the only major foreign partner with whom he has normal working relations, and in addition he cannot afford to lose additional billions of dollars, after those he had already lost in cancelled Russian trade deals before the relations were normalized last summer . . .