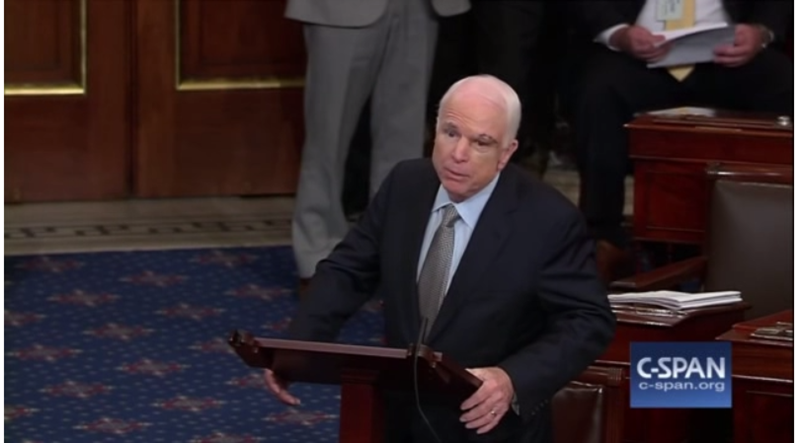 What do we take away, then, from the earthquake on the Senate floor last week, with wisps of smoke still rising from the ruins of Republican efforts to do something—anything—likely to rationalize the health care mess?

We take away, or should, the lesson that government can’t do everything, and when it tries to, you get something approximating Obamacare: too big and complex to succeed, unless you redefine success to mean: “We’re getting there, OK?”

Well, no. It’s not OK at all. At the center of national attention, currently, are the Republicans’ busted plays. Repeal and replace? Nope. Just repeal? Nope. Hail-Mary-full-of-grace-and-a-“skinny”-repeal? Not even that.

The varied and competing interests that circled the Republican side of the Senate—biting, nibbling, pushing, shoving—deserve conspicuously less attention than does the genuine problem to which the party was unsteadily addressing itself. That problem is one of means and feasibility. In passing Obamacare, we—I mean, the Democrats, who passed the thing all by themselves, with no Republican votes—bit off more than they can chew.

The promises remain intact. The money to fulfill them—not so.

Obamacare’s worst miscalculation probably is that of turning Medicaid, a program designed for the very poor, into a benefit for ever broader swathes of the middle class, normalizing the idea of government as the great, and inevitable, health care provider. That would be in addition to everything government does already, or tries to do, such as pay major medical costs for the elderly (Medicare) and underwrite basic living expenses for the retired (Social Security).

A pause is in order to reflect on the U. S. government’s original missions, as described in the Constitution: national defense, the regulation of commerce, the provision of post offices, the issuing of patents and so forth, all these being measures larger than individuals or even states could undertake for themselves.

That was then? Sure; and this is now. The modesty of the nation’s founders seems all the more impressive as we consider the immodesty of their successors. There’s nothing, apparently, that the government can’t—and won’t—do if the rewards (votes, poll ratings, warm praise in the New York Times, etc.) are significant enough.

The downside to the varied ventures of modern government isn’t theoretical. The downside, evident with Obamacare, has, by my reckoning, two major aspects. A free people will ignore them at their own risk.

The first is money. Both Social Security and Medicare are due to run out of money in the next couple of decades. What then? Cutbacks in funding, confiscatory taxation or both at the same time. What of Medicaid—it’s going to thrive while older, more widely enjoyed programs wither? The idea staggers credulity. The trouble with socialism (or welfarism, if you prefer) is as Maggie Thatcher described it: You eventually run out of other people’s money. Even now, the projected cost of insurance in various venues is shooting up sharply. For what Obamacare is promising them, insurance companies can’t afford to insure without more money from the insured: larger premiums, bigger deductibles, that sort of thing.

The second downside to government intervention ties in tightly to the first. It is the creation of discrete constituencies that block meaningful reform—as reform of Obamacare was blocked by “moderate Republicans” (e.g., Sens. John McCain and Lisa Murkowski) and Democrats unwilling to cross self-described lobbies for the poor.

The means of actually reforming Obamacare actually exist: e.g., block grants to the states for Medicaid. But how are you going to do it, when politics drives the process? Older generations understood that political temptations had to be minimized. Once government turned into a Christmas benefit, doling out brightly wrapped packages right and left, things could only get worse. And so they have—the Obamacare mess defying cleanup, lest people (generally of “progressive” outlook) commence throwing things at the cleanup crew, insulting them in New York Times editorials and on MSNBC.

Government health care, we now find, thanks to John McCain and others, is here to stay. That’s what government programs mostly do, you know: stay and sit and take on poundage and flab, making you want to reread the Constitution for an older view of sensible balance between security and freedom.

Previous PostShall We Fight Them All?Next PostThe Rise of the Profane