Twin Threats to the Land of Fire

My first stroll through Fountain Square in the walking district of Baku, Azerbaijan, revealed the warp and woof of the city.  If I didn’t know otherwise, had someone told me that I was on the Zeil promenade in Frankfurt, Germany, rather than in a country just north of Iran, I would have believed him.  The sights and sounds are that of any large European metropolis: sidewalk cafés, boutiques, and street vendors selling paintings and other handicrafts.

In a country whose population identifies itself as over 90-percent Muslim, I had expected to see hijabs and burkas.  Instead, the preferred dress of the women consisted of formfitting jeans, high heels or boots, and fashionable accoutrements.  Unlike in Istanbul, which I visited briefly some years ago, where shopping and daily activity were interrupted by the call to prayer from the nearest minaret, here in Baku business and leisure proceeded without disruption.  Never did I witness the streets empty or people scurrying off to the mosque.  My observation is confirmed by the data collected by the Caucasus Research Resource Centers: Only 5 percent of Azerbaijanis report attending a mosque weekly, 34 percent attend only on special occasions, and 27 percent claim never to attend at all.

The secularism of Azerbaijan is a legacy of the Soviet era.  Azerbaijan was a member of the Soviet Union from December 1922 until August 1991 when the Azerbaijan Supreme Soviet voted in favor of independence.  Azerbaijan’s post-Soviet orientation is nationalist, not religious.  The ethnic kinship between Azeris and Turks led the newly independent Azerbaijan to follow the Turkish model of Kemalism instituted by Atatürk.

My purpose in visiting Baku was a short-term teaching assignment at ADA University, which is well funded by the Ministry of Foreign Affairs.  My assignment came through the Center for International Legal Studies, an organization that pairs senior American lawyers with universities in former communist countries desirous of exposure to the American legal system.  ADA is not a law school; they asked me to teach on the basic principles of American government.

My first visit to the campus was courtesy of an ADA student who also worked the desk at my hotel.  His affability was characteristic of the Azeri people, who seemed to be genuinely appreciative of my interest in their country.  Founded in 2006, ADA boasts state-of-the-art facilities and a faculty drawn both from within the country and from around the globe.  English is the official language of ADA.  All classes, whether economics or history, are taught in English.  There are a number of foreign students at ADA, and my class comprised students from Africa and Georgia as well as native Azerbaijanis.

Whether in class or in private, students were careful to avoid any criticism of the government.  Shortly after the Arab Spring uprisings in 2011, the Azerbaijani government made it a priority to snuff out opposition political activity, silence public allegations of governmental corruption, and rein in nongovernmental organizations.  According to Human Rights Watch, the government succeeded in these efforts

by arresting and imprisoning dozens of political activists on bogus charges, adopting restrictive legislative amendments, consistently breaking up public demonstrations in the capital, and failing in its duty to investigate and punish those responsible for violent attacks and smear campaigns against critical journalists.

During my stay, the European press was up in arms about the arrest of the popular blogger Alexander Lapshin in Belarus and his extradition to Azerbaijan to face charges related to entering the breakaway region of Nagorno-Karabakh illegally and supporting recognition of its independence.  Departing from the government’s stance on this region is a big no-no.  Lapshin was found guilty in July and sentenced to three years in prison.

Azerbaijani President Ilham Aliyev is not one to be defied or dismissed.  To ensure his family’s political dynasty, in February 2017 he appointed his wife, Mehriban Aliyeva, first vice president.  In that position, she presides over cabinet meetings and will succeed Aliyev if he steps down.  Aliyeva is a child of one of the country’s wealthiest families, the Pashayevs.  Her family controls multiple banks, insurance companies, and other businesses.  Several relatives hold top government posts.  When one of my students asked me privately what I thought of Aliyeva’s appointment and I expressed disapproval, he looked left, then right, and cautiously nodded his head in agreement.

Though most are afraid to say it, Azerbaijan will be well served once she has a president who is not named Aliyev.  Nonetheless, Heydar Aliyev (1923-2003), Ilham’s father, remains a hero to many of the people.  In the 1970’s, Aliyev was a major player in Moscow politics.  He became a full member of the Central Committee of the Soviet Communist Party as well as the Soviet Politburo.  Then he fell from favor under the Gorbachev regime and was sacked for corruption.  In 1993, Aliyev was elected president of a newly independent Azerbaijan.  His countrymen perceived him as a can-do leader whose connections in Moscow could keep the peace with the Russian Federation.  During his administration he implemented policies stressing energy relations with the West and engagement with the United States, the E.U., and various international organizations.

Aliyev brought foreign investment to Azerbaijan in 1994 when he and a consortium of foreign oil companies (including British Petroleum, Amoco, and Pennz oil) signed a production-sharing contract to develop Azerbaijan’s Caspian Sea reserves.  The oil companies invested billions of dollars in Azerbaijan’s oil and gas sector, and the government has profited handsomely from the deal.  The modern look of Baku’s skyline is the result of Aliyev’s shrewd negotiations.

Young Azerbaijanis, however, have concerns about their country’s reliance on oil.  They fear Azerbaijan is becoming a one-trick pony that is failing to develop other industries and sectors.  Economic diversification, they say, will be essential to the country’s long-term independence.

Although Azerbaijanis are generally hesitant to criticize their government, they don’t hold back when discussing Armenia.  Nagorno-Karabakh is a disputed region within Azerbaijan.  During the waning days of the Soviet Union, hostilities broke out there between ethnic Armenian Christians and Azeri Muslims.  A multiyear war erupted after Nagorno-Karabakh tried to join Armenia formally and then declared independence in 1991.  Russia brokered a ceasefire in 1994, and the territory was largely left to govern itself.  Before the armed conflict, over 40,000 Azerbaijanis lived in the region, but now fewer than 400 of Nagorno-Karabakh’s 138,000 residents are non-Armenians.  Shots are exchanged almost daily between Azerbaijani and Armenian military forces.  If large-scale fighting breaks out, many fear that Russia would intervene on behalf of the Armenians, with Turkey and Iran (25 percent of Iran’s population is ethnically Azeri) coming to the assistance of Azerbaijan.

In polls, Azeris report that a resolution of the Nagorno-Karabakh conflict is the most important issue facing their country.  By “resolution,” they mean regaining full control of this area.  My students were typically reserved when discussing economics or constitutionalism.  But when the issue of Nagorno-Karabakh came up, they spoke out of strong conviction and emotion.  It is the issue they most care about.

In class we traced the evolution of the American system of government from its English origins and the system of parliamentary sovereignty, to the Constitution of 1787 and American acceptance of popular sovereignty, and finally to modern-day constitutional controversies.  In explaining the controversy over American slavery, I expected pearl-clutching and sanctimony, as is de rigueur on American campuses.  Instead, my African students set the tone with insouciant comments.  “Arabs are enslaving Africans today,” one student said.  “That’s not history but a current event.”  He was correct.  Sub-Saharan African migrants seeking travel to Europe are often waylaid by Arab slave traders and find themselves deprived of liberty and on the auction block.  The Guardian recently reported that “the trade in human beings has become so normalized [in Libya] that people are being traded in public.”

Another class discussion that surprised me had to do with gay marriage.  For all its secularism, Azerbaijan is still considered a rather conservative society.  Indeed, one young tour guide confided to me that he preferred to date Russian girls, who “are just out to have a good time,” rather than Azeri girls, who “are only interested in finding a good husband.”  And while some of my students expressed astonishment at the U.S. Supreme Court’s Obergefell decision, others took a very Western, liberal attitude.  “If two people love each other,” one female student remarked, “does it matter if they are both girls rather than a boy and a girl?”  Signal for the passing lane to speed toward Western progressivism.

On the whole, I was impressed by the caliber of student at ADA University.  The majority of my students diligently prepared for class and participated in group discussions.  It was also refreshing to be around non-tattooed young people whose wardrobe consisted of more than graphic T-shirts and ball caps.

It took trips outside of ADA University and Baku for me to see that Azerbaijan was not all progress and affluence.  One weekend I hired a guide and a taxi to visit the Gobustan region, which is 64 kilometers southwest of Baku.  Once outside of the city my taxi left paved roads and traveled through territory resembling a moonscape.  Rugged terrain gave way to large pools of oil and a garbage dump where poor Azeris sorted through the trash as they eked out a living.

At times I wondered how we would traverse the terrain in our London-style taxi when a lunar rover seemed more appropriate.  But somehow we did, and arrived on a plateau featuring large mounds of gurgling and bubbling mud.  Mud volcanoes are channels for escaping pressurized gas and water, sometimes with trace amounts of petroleum.  The mounds can range from a few meters to several hundred meters high.  Azerbaijan is home to approximately one third of the world’s known mud volcanoes.

There was no government official at the site, no one selling tickets or souvenirs—in fact no one but me, the guide, and our driver.  In Gobustan, there was nothing to keep people out of the mud or to warn them of the potential for an explosive release of gasses under pressure.  For the entire morning I enjoyed exploring these natural wonders and ruined a good pair of shoes as I stepped into a mudflow that had yet to harden from exposure to wind and sun.

It is not uncommon in Gobustan and in other places around the country to see plumes of flame coming from the earth because of gas seeping through fissures in the ground.  On another weekend, I visited Yanar Dag (the “burning mountain”) just outside of Baku.  This hillside features a natural-gas fire that blazes continuously.  At times the flames reach as high as ten feet.  Because of the many sites like this, Azerbaijan is called the Land of Fire and was a mecca of Zoroastrianism until the advent of Islam.  Nowruz, the Zoroastrian New Year, is still widely celebrated in Azerbaijan and enjoys the status of a national holiday.

Unfortunately, I had to leave just before Nowruz and missed the grand celebrations described by my Azeri friends.  At the Heydar Aliyev International Airport I got my final glimpse of the tricolor Azerbaijani flag, sporting three equally sized horizontal fields of blue, red, and green.  The blue symbolizes the country’s Turkish heritage, the red modernism or progress, and the green Islam.

With only 25 years of independence under her belt, Azerbaijan has succeeded in keeping the three colors balanced.  The big danger would come from the green of Islam—which right now seems checked by the red of modernism—if the people were to begin taking seriously the tenets of their religion.  But another threat is posed by Western liberalism, masquerading as Azerbaijan’s cherished progress; the effects of the poison were noticeable among my students at ADA.

They are the same twin threats faced by the West. 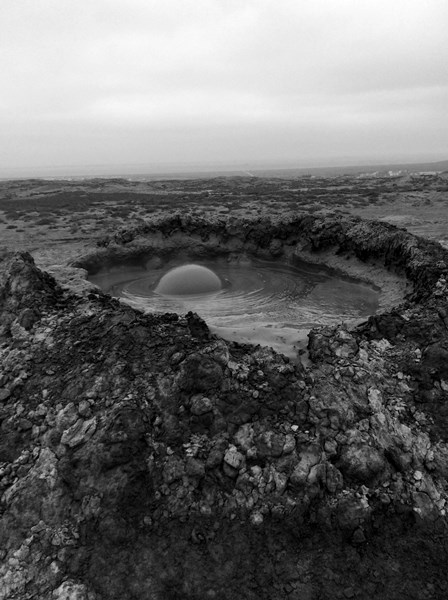