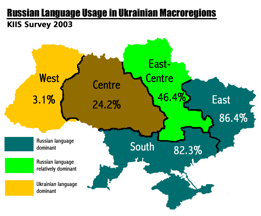 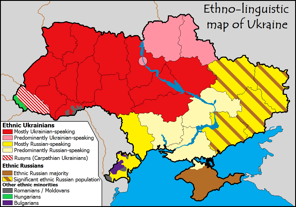 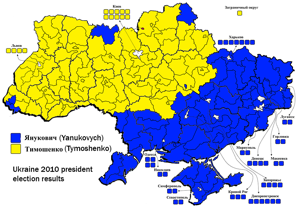 To understand the ongoing crisis in Ukraine it is necessary to take a look at two maps: the distribution of votes between Viktor Yanukovych (blue) and Yulia Tymoshenko (yellow) in the presidential election of January 2010, and the linguistic divide between the mostly Ukrainian-speaking western and central regions (red, pink) and the predominantly Russian-speaking southern and eastern regions (brown, yellow, beige).

These two maps coincide to an astonishing degree. They reflect a fundamental cultural and emotional division, not merely a difference of opinion on the issue of the EU association or the presence of the Russian Black Sea fleet in the Crimean Peninsula. It is a division between two fundamentally incompatible identities. As such, it is comparable to the divide apparent in the electoral map of the 1860 presidential election.

The main difference is that Ukraine is an  evenly divided country, by territory and by population. The “unionists” (Western Ukrainian nationalists) cannot hope to subjugate and “reconstruct” the Russians and pro-Russian Ukrainians, who dominate the Black Sea coast and the East. The “separatists” (from Kharkhov in the northeast to Odessa in the southeast) will never become “Ukrainians” in the tradition of Stepan Bandera and the SS Division “Galizien.”

Any great power that attempts to control the whole of this deeply divided country will come to a grief. The pro-Russians in the east and along the Black Sea coast can never convert the Western Ukrainians to the paradigm of a Moscow-friendly “borderland” (the literal meaning of “Ukraine”), whose destiny is in a close association with Russia. The nationalists will never cajole their eastern and southern would-be compatriots to an image of “Ukraine” defined by a visceral hatred of Russia and all her works.

Ukrainian nationalism is a hybrid phenomenon. Its cradle is in Lavov, a predominantly Polish city until September 1939, whose ethnic composition (and that of the surrounding countryside) was irreversibly changed by the genocidal Banderists during the war and by Stalin’s commissars thereafter. The eastern border was arbitrarily drawn in 1922 by the non-Russian Bolsheviks, hell-bent on reducing Russia in size. The 85% Russian Crimea was transferred to Ukraine from Russia by a stroke of Nikita Khrushchev’s drunken pen in February 1954. There is nothing sacred and nothing permanent about those absurd borders. Any attempt to uphold them with the force of arms will lead to bloodshed, as Tito’s equally arbitrarily drawn internal boundaries did lead in ex-Yugoslavia two decades ago.

The “orange revolution” in the fall of 2004 produced an inept leader (Yushchenko) and a corrupt operator (Tymoshenko) whose terminal incompetence paved the way for Yanukovych’s victory four years ago. He proved to be equally incompetent and corrupt, paving the way for the Maidan-engineered revolutionary putsch last week. Western powers stage-managed a violent overthrow of what was, stricto sensu, a democratically elected chief of state. They will now reap the benefits: a bankrupt economy in immediate need of some tens of billions of ready liquidity, a disintegrating country with secessionist regions that cannot be controlled short of a civil war, and a new Cold War-like flashpoint that nobody needs. Jihadists of all countries, rejoice!

For Russia the future of Ukraine – and especially its Black Sea coast – is an existential issue. For the United States it is an optional crisis, the outcome of which will not affect the security and well-being of America in the slightest. John McCain would just love to repeat the disastrous Crimean War of 160 years ago, but he is insane. It is to be hoped that reason will prevail.