Check out the following chart of Real Median Household Income, which declined 9 percent nationally from 1999 to 2012.  Find your state’s decline and meet me below. 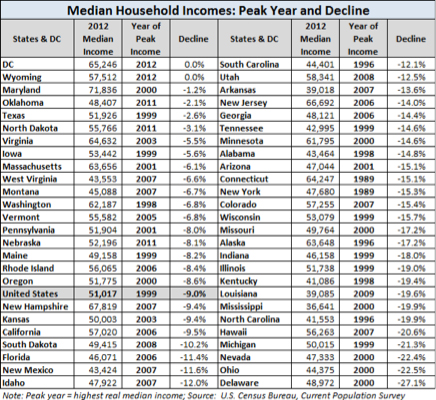 Notice the place at the top of list, which had no decline in Real Median Household Income: Washington, D.C. It’s a giant vampire sinking its teeth into the rest of the country and devouring its blood. In 2010, USA Today reported federal workers – most of them clotted in D.C., but some flying like bats around the rest of the country – made twice, on average, that made by their counterparts in the private sector.

Next on the chart, notice Maryland (median income: -1.2 percent) in third place and Virginia (-5.5 percent) in seventh. Almost all of Maryland and the Northeastern part of Virginia now are excrescences of D.C.

When I lived in Northern Virginia and worked in Bethesda, Md. in the mid-1980s, the areas already had become essentially Yankee suburbs, much like the Detroit suburb I grew up in before the auto industry crashed. Any trace of Southern heritage and uniqueness long was plowed under to make room for condos, malls and massive buildings for the government bureaucracies, such as the Pentagon in Arlington and the CIA in McLean. Pretty much all of Maryland now has been absorbed, as witness the Socialist Security complex in Baltimore and the NSA’s demonic GHQ on Ft. Meade, 15 miles southeast of Baltimore.

Southern California would show maybe -15 percent, and the Inland Empire (Riverside; San Bernardino, now bankrupt) and other areas away from the Pacific breezes, would show -30 percent.

At the bottom of the state list, strangely, is Delaware (-27.1 percent), despite so many corporate headquarters moving there. Maybe Joe Biden drove prosperity away.

Second worst is Ohio, the main “swing state” during elections, with a shocking -22.5 percent. That really is Great Depression-level decline. Presidential wannabes crisscross it relentlessly in the run-up to the quadrennial November risible plebiscites. You would think that, once elected, the presidents thankfully would shower federal largesse to the state that, when I was a kid, was the answer to the riddle, “What’s round on the outside and high in the middle?”

Fourth worst is Nevada (-22.4 percent). It was hit hardest by the 2007-09 real-estate crash, with median property values crashing up to 80 percent. But you would think the state that offered to America Senate Majority Leader Harry Reid would be the recipient of more than a little taxpayer lucre. Maybe our money just goes to the ChiComs who have benefitted from the subsidized solar fields forever (bad Beatles semi-reference) that, thanks to Reid, are marring his state’s landscape.

Fifth worst is my home state, Michigan (-21.3 percent). Did you know that it was Gov. George Romney, pa of Mitt, who five decades ago imposed the state’s first income tax, and blew the money on socialist programs that ruined the state? The place was pretty nice before then.

The chart comes from David Stockman’s site. He correctly blames the government’s Keynesian economic policies imposed since 9/11. I’ve made similar analyses for years.

Basically, after 9/11, President Bush and Fed Chairman Greenspan panicked. Bush went on a wild spending spree, the money borrowed from China coursing through D.C. like someone chugging three Big Gulp Cokes getting buzzed on a sugar-and-caffeine high. Bush not only launched the expensive Iraq and Afghanistan wars, the profits going to the military-industrial complex; he goosed domestic spending 60 percent and funded the vast NSA-Stasi state that now shreds our freedoms.

Greenspan skyrocketed the money supply, crashing the dollar’s value from an average of $350 an ounce from 1983-2001 to $1,800 an ounce in 2011; it since has dropped back to between $1,200 and $1,300. The immediate effect of inflation always is on commodities, which is why oil and gas prices quadrupled. As the late Jude Wanniski pointed out, inflation on goods and services takes about 15 years to play out. Businesses struggle to keep prices down to please their customers. But inflation wins in the end. That’s why we’re finally seeing sharp increases in food and other prices.

Greenspan also kept interest rates close to zero. Which means that when inflation is 2 percent officially (5 percent really), and a passbook savings account pays close to zero, the middle class can’t save in the usual way. Its “savings” actually go down at 2 to 5 percent a year. Even as the middle-class pays 30 percent on its credit cards.

Joe Americano, working in a muffler shop, can’t save money to open his own auto repair shop. Which then means he can’t hire more people at middle-class incomes. He’s stuck not even treading water, but sinking. The people Joe doesn’t hire go on welfare.

Fed Boss Bernanke and President Obama continued the Greenspan-Bush Keynesian policies, as has new Fed Boss Yellen. During these last 15 years, Congress has been split about evenly between Republicans and Democrats. It’s been a bipartisan assault on the middle class. Ron Paul’s warnings were ignored.

Some Chronicles readers might suggest higher tariffs to help industry. But the money would just flow to D.C., with a fraction dribbled out to industries with political connections.

Nor is raising taxes on the “1 percent” the answer. Many of them are victims of D.C. and would just have lest money to invest in creating jobs at their businesses. As to the “connected capitalists,” as they have been called, they would just get back the higher taxes through additional government contracts paid for by the higher taxes.

The only answer is taking an axe to federal spending of all kinds.

This really has been not the Great Recession, but a national depression almost as severe as the Great Depression. If it continues, it will even be bigger than that calamity, which also was caused by D.C.

When D.C.’s home values crash 80 percent, you’ll know our liberation from its tyranny is at hand. Until then, the rest of America will just keep being part of D.C.’s involuntary blood drive.