Blame the Fed, not China, for yuan devaluation

Donald Trump is right to blame our government for its many bad trade deals with China. But he makes a mistake when attacking China’s recent devaluation of the yuan. “They’re just destroying us,” he said in a CNN interview. “They keep devaluing their currency until they get it right. They’re doing a big cut in the yuan, and that’s going to be devastating for us.”

Actually, what’s devastating for us are the policies of the U.S. Federal Reserve Board. When comparing the yuan to the dollar, the dollar is not a stationary standard; rather it’s not a standard at all, but a moving fiat currency. As I wrote in the article “The Yellow Brick Road to Jobs and Stability” in the July Chronicles:

Likewise with the yuan. It always should be compared to gold, not to the dollar.

So, what’s been happening? First, as I noted in my article: “Then after the September 11, 2001 terrorist attacks, Greenspan panicked and inflated the currency, to $566 an ounce of gold when he left office in January 2006. His successor, Ben Bernanke, continued the inflation up to $1,775 an ounce in September 2012. But then Bernanke backtracked, deflating the dollar’s value to the $1,200 to $1,300 range in June 2013, where it has remained since, including under his successor, Janet Yellen, who became Fed boss in February 2014.”

Since my article appeared, the dollar has risen in value yet further, to $1,115 per ounce, as of August 18, 2015 (a lower number for the currency means it can buy more gold per ounce, so it’s stronger) This is even more deflation.

The Chinese see this happening. Reuters headlined an article on August 11, “Yuan falls most since 1994 after surprise devaluation.”

But what’s really been happening is that China for two decades has tied the yuan to the dollar. That makes a lot of sense because we’re the primary destination for their exports. And most oil and other energy globally is denominated in dollars (although that is starting to change; last year’s China-Russia natural gas deal bypassed the dollar).

Here’s a Goldseek.com chart of the dollar against gold the past five years: 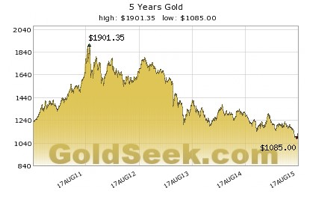 And here’s a similar chart for the yuan against gold the past five years: 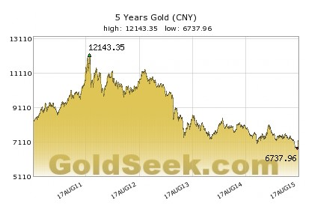 You can see they’re almost identical.

For some reason, the Chinese have decided no longer to follow the dollar so closely. Its devaluation of the yuan just mirrors the deflation of the dollar. That is, the yuan is remaining more aligned to gold’s value than the dollar is.

Why? For years, gold bugs have suggested China might go on a gold standard, which actually would supercharge their economy (as would happen to the U.S. economy if we did so). But if they did so, they would tick everybody off, as we’re now seeing.

More likely, this is another attempt to stave off the economic crisis the country is undergoing. As I noted in my Chronicles article, deflation, although more rare than inflation, also causes recessions and depressions, as last seen in the United States during the dot-com bust, 2000-01—and as we are seeing today as our economy remains sluggish.

In conclusion, although trade deals with China need to be improved—and borrowing from China to pay for our deficits needs to be ended by ending the deficits—the real source of the currency chaos of recent years is closer to home: The Eccles Building.  Going back on gold would end all these problems.