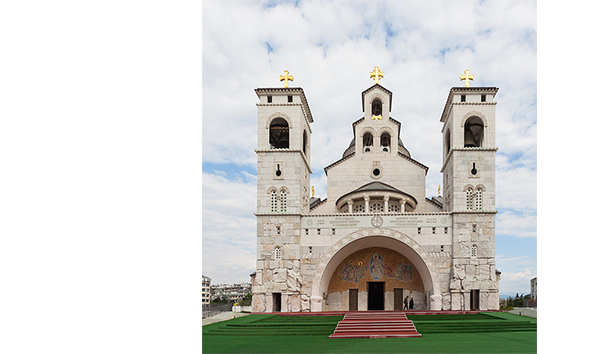 The old Serbian joke goes like this. An elderly Serb peasant invites his friends over for some drinks and they notice that the crucifix on the wall of his hut is positioned between two portraits: one of Stalin and the other of Tito. When his buddies express their surprise, bordering on outrage, the peasant responds: “Was the Savior not crucified between two criminals? Nothing sacrilegious here”.

Recently, the newly built, magnificent-looking Church of the Resurrection in Podgorica, Montenegro came to the world’s attention for one of its frescoes. The anonymous painter portrayed Tito in hell, in a sea of fire, right next to Marx and Engels, surrounded by diabolical figures. The 15th century Ostrog monastery, also in Montenegro, depicts Tito in the company of Judas, Lenin, and Hitler. According to the Voice of Russia, the Ostrog monastery is “widely believed” to have sheltered Bosnian Serb leaders Radovan Karadzic and Ratko Mladic.

Surprisingly, for a part of the world that suffered so much from communist terror, the fresco found its critics in Montenegro. A forty-three-year-old lawyer named Rade Stankovic had this nonsensical response: “The Church should not interfere in the secular world and determine who deserves a place in hell or heaven”. Sounds like an ACLU liberal to me. The malevolent influence of the Eurocrats extended even to tiny, parochial Montenegro. Perhaps the EU will succeed where the Ottomans, the Hapsburgs, the Axis powers, and communist Yugoslavia failed and conquer the previously unbowed people. Only time will show.

However, twenty-three-year-old Milos supported the fresco, decrying the evil of communism and telling the BBC that “Many people were killed in the name of the ideology promoted by Marx, Engels and their followers”. Hopefully, most Montenegrins agree with Milos, and not with Rade.